I don’t want to get out of the tent at all. Eventually I force myself to do it. Having many layers of clothing on me, I open the entrance. Amazing view. There is a mist in the valley. Sun occasionally appears between clouds and lit hills with golden color. The temperature is around 0 degrees. Cold wind is really unpleasant. While I pack my tent, I ceased to feel hands. I can not imagine I would have to stay along the road for a long time. However, fortune favors me today, for ten minutes later a car with a boat on the roof stopped. The driver seems pretty surprised of seeing me so early in the morning in deserted area. But he takes me on board and increases temperature. 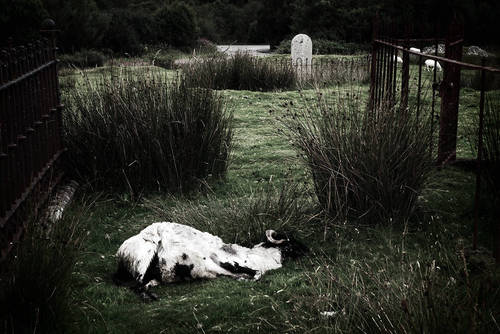 Fourteen days later I am alone, again. A friend who played with me, just has left to Edinburgh. I am hitchhiking to get to Fort William. There I will try to take pictures of steam locomotive. It departs from there every day. A huge bilingual board says that it is strictly forbidden to enter the areal. It seem that I will not take pictures of the backstage after all. Right next to the depot, sheep are running around an old cemetery. Hopefully I will take some interesting pictures there. I discover a dead ram. I do not regret going there. 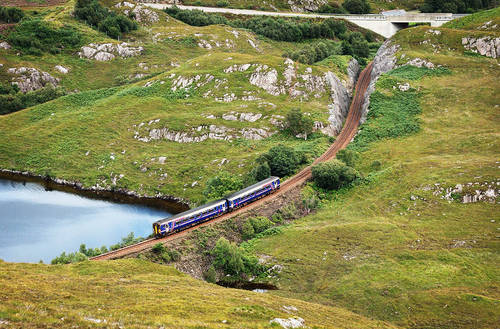 It rains a little and annoying wind is blowing there. Again, all cars are riding in the opposite direction (as usually) than I need. After an hour two Indians in luxurious BMW save me. We stop on a bridge above a railway to take pictures of sunset. I reckon that it would be easier to find some camping site here for it is still light. It would be worse in the night in the city. The Indians wonder why I want to stay here, they try to persuade me to go with them to Mallaigu and stay in a hotel. Few minutes later they understood my reasons.

I climb over a fence of a sheep hold and direct my steps that could be suitable for me to take pictures of the steam locomotive. From time to time my feet got deep into wet soil. Fortunately water doesn’t get to my boots (it is absolutely unthinkable to dry them anywhere here). I leave my backpack at a foot of the hill I am about to climb up. I start a difficult climb on a slippery slope. 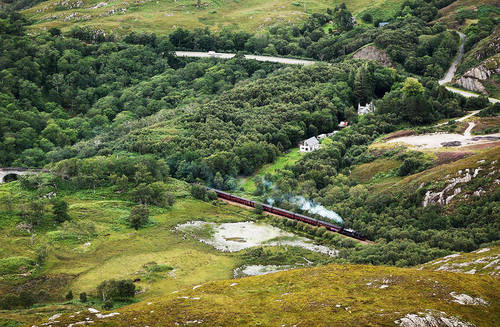 I slowly doubt whether the train I am waiting for, rides also on Sundays. According to the schedule, it was supposed to pass by already an hour ago. Large gray clouds fly in the sky. Sometimes, a niche appears between them and the sun shines for a while. At last I hear I long sound of steam pipe announces that the train is coming. It seems, that there are less and less niches in clouds. Soon, I lost all hope that the sun might shine on a right spot in the right time. The locomotive is getting closer and closer. And suddenly, the sun! It shines right on the spot I need it to! A beam of light still moves and the shadow slowly get closer to the railroad. Come on! 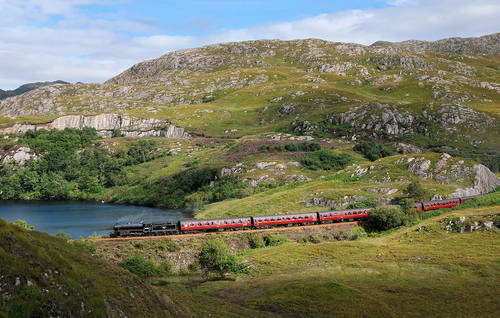 Finally... Three clicks and it is done. The locomotive disappears in the turn. The sun doesn’t shines on the carriages any more. A non-photographer cannot imagine how stressful such situations are. Particularly in Scotland. I have to sit for a while.