While on a road we encountered two impressive edifice called henge, this 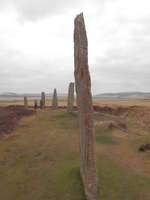 name is commonly used for stone circles with a moat and a bank. First we stopped at the Ring of Brodgar, the third largest with its 104 meters in diameter. Less than a half preserved until today from original 60 stones. Still, they are in a regular circle and are really magical. Less preserved are menhirs at Stenness. The highest are 6 meters high, the double of the Brodgar’s. The estimated date of origin is 3100 B.C. and thus it is one of the oldest in Great Britain.

Another interesting feature is its ground plan. Usually, it is almost a perfect circle, in Stenness the stones were erected in a shape of eclipse. All monoliths rise lot of questions. How it was possible 5 thousand years ago for some one to erect such narrow and high stones in a exact 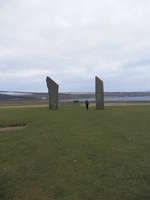 shape, stones which are from different locations… And how it is possible they still stand until the present? Despite many years of attempts to explain it, it still remains a mystery. But as we had learned in few days, stone circles are not the only landmarks on the islands which are so mindboggling.

On our journey to treasures of northern island took as to the northwestern edge of Mainland. There is an island of mere 21 hectares. Interesting fact is that this island is accessible only during low tide via concrete road 300 meters long. For hundreds of years the island is deserted. But it was different during the course of history; since the fifth century there was a Pict stronghold and many traces remained resembling their culture. However, we had not enough time to explore it, nobody guards the entrance and it was on one’s own risk to go there. So nobody can guarantee you when tide would come and block your way back. An idea of a night on a deserted island was unthinkable, thus we rather left the island as soon as we could ...