These are stone and concrete barriers piled up above the sea. Originally, they protected the bay of Scapa Flow against Germans in the time of the Second World War. Today, there goes a nice asphalt road on them, thus these barriers are used to regular transport. 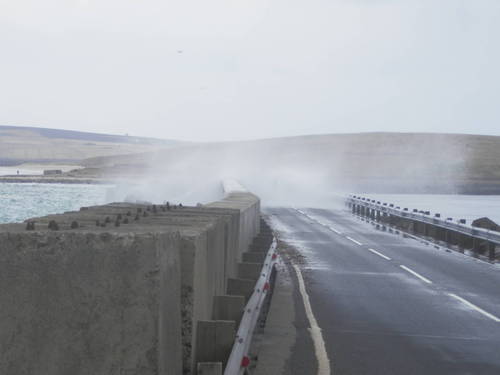 The first island we crossed on our way to south was Lamb Holm, its area is only 40 hectares. Basically, the only thing we found there was an Italian chapel from the 20th century. POWs built it there while they were working on the Churchill barriers. The front of the chapel is built in the neo-Renaissance style, however, once can assume from looking at its sides, that the funds were limited. It could be labeled as a half-circular metal building resembling a hangar. 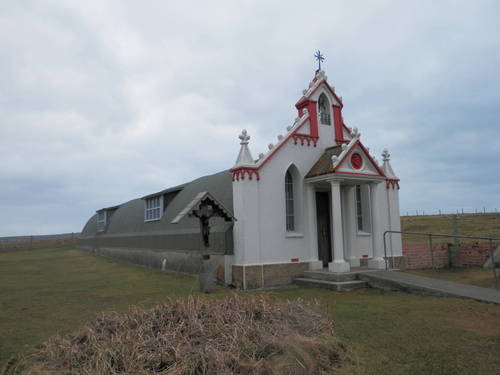 Within view was a second crossing across the barriers, and since I was enchanted by crystal clear water in the bay witch was adjacent to the road, I decided to take a photo of it. We pulled down the window and I was waiting for the right moment. But on the picture was just a high concrete wall instead the bay. Before I realized why it stood there, it was too late. A large wave took under every square inch. It was so strong that our car spent few second in the opposite way. Fortunately, we had a quick-witted driver and nobody was hurt. When we were safe behind the barrier, we found out that except a torn off windshield wiper and a nut chocolate flavored with sea water, everything was ok, despite it was bit wet. 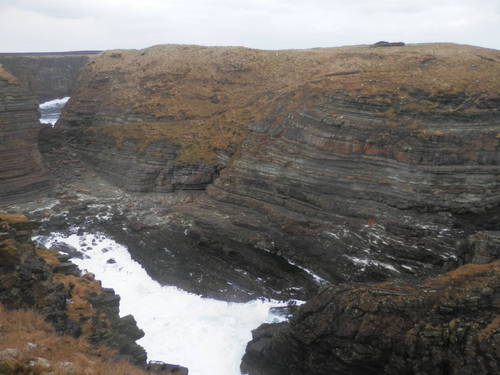 Soon our jeep was in full speed heading to the southernmost part of South Ronaldsay island. In nice weather it is possible to see Scotland. I wonder, how many times a year this happens. We had visited this corner to see another tomb. It is called The Tomb of the Eagles; the name was derived from the type of rituals done during burials. A death person was left on a spit of land until eagles had cleaned his bones from flesh after the body was laid in the tomb. Moreover, eagle bones were discovered together with humen. Another interesting fact is that bones were put in four chambers, in every chamber was another part of human body. The whole procedure is really unique. No wonder, the farmer who randomly found the tomb on his fields was very surprised. However, the discovery was also discovery of his new life hobby – archeology. Near the tomb, thanks to him there is one of the best visitor centers, there we had a unique chance to hold treasures from a tomb 5000 years old!! 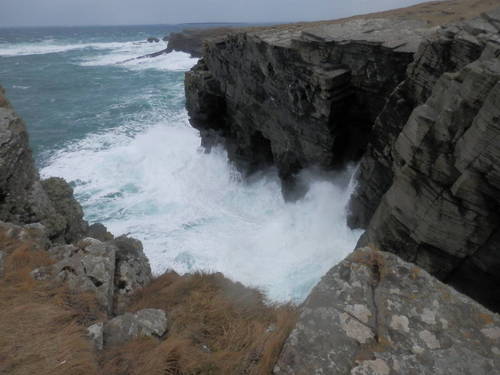 Finally, we moved to eastern peninsula of Deerness on Mainlandu. The main attraction used to be Gloup, a salt cave the ceiling of which collapsed thousands of years ago. It created quite narrow and more than twenty meters long and deep abyss. In the abys water was whirling so heavily that it looked just as puffy foam clouds.

A pathway continued along the coastline. Thanks to this we had beautiful views on stormy sea crushing to high cliffs. To see this we had to withstand strong northern wind from which there was no place to hide. We drank hot tea with a Scotch, a great medicine in this cold weather :). We successfully passed through a chasm in rock formation until we reached the sea. We even couldn’t hear our own words for sea was really wild. We just silently enjoyed wild nature.

To reach ruined church about which we had learned it was a place of pilgrimage, we had to continue aon a narrow steep road on the edge of the cliff. Ruins of the church were a modest shelter from a strong wind, at least for a while. Also, it was a small surprise for we discovered a small hole in one stone and there were coins from all around the world. Rusting on them let us know that they had been lying there for a while. We put there few others and soon cocooned in our winter jackets we returned along the pathway back to our car. 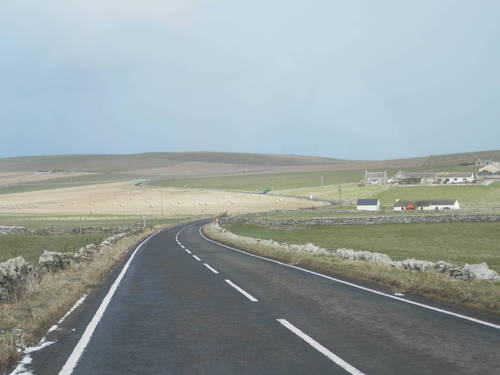 Few hours later a ferry was waiting for us. Luckily, the return was nice, a Scotch helped us to get warm again. It got even better for the sun broke clouds. What a beautiful goodbye gift!