Bardejov is a district town situated in East Slovakia, and, to tell the truth, you meet there a history on each step.

The first notice about Bardejov comes of 1241 amd was preserved in Ipatiew Chronicle. Nevertheless, six years later, Bardejov was mentioned in a document of King Bela IV., where there were solved the disputes between German colonists and Cistercian Order on territory Terra Bardha. The community spreaded quickly, thanks to its strategical position on crossroad of merchant ways between Baltic and Black Sea. The development was also enabled thanks to numerous privileges, granted by Kings Charles Robert and Louis I. In 1376, King Louis declared Bardejov as Free King´s Town. 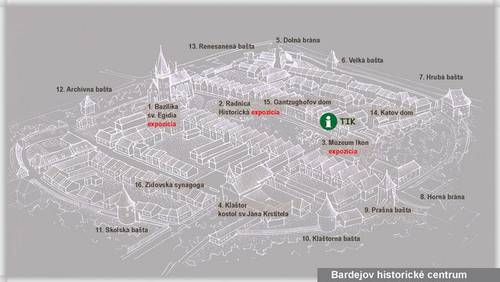 Within 15th century, Bardejov experienced the greatest economical prosperity, thanks to trade and handicrafts. On the other hand, 16th century was signed in growth of culture and education. However, next coming century brought the town economical decline, when plague epidemy stroke the inhabitants and big fire, caused by Tokoly soldiers, nearly destroyed the town.

Anyway, after the 2nd World War, big development of industry and education arrived. Apart of this, great attention was drawn to reconstruction of local historical monuments.

Bardejov is frequently signed as the most Gothical town of Slovakia. Its historical nucleus was just in 1950 declared as Town´s Monuments Area. Monumental reconstruction was made within 1970 -1975. So, this town´s monuments area is, together with unique Jewish quarter, situated in north-west direction from city centre, registered (since 2nd December 2000) among localities of UNESCO World Heritage Survey.

On main Town Hall Square, you can admire unique St. Egidius Basilica Minor of Gothic style. In the interior, you can find a collection of eleven late Gothic altars of 15th and 16th centuries. Some of them are taken for top European wood-carving works. The Basilica is joined with common wall to a building of town´s human school building of Renaissance style. In the middle of the square, a Town Hall of Renaissance style is placed. Inside, you can visit the collections of Šariš Museum. A unique outlook from bird´s view is to be offered from gallery of Neo-Gothic church tower.

It is also worth to be noted: Franciscan Monastery with a church, situated close to town´s fortification, which is most preserved defensive system of Slovakia. Except ramparts, even a gate and ten bastions were preserved till now.

mentioned document of Bela IV. contains a notice about spa. As the best treasury, there are rare sources of natural healing mineral waters. They are weakly mineralized, hydrocarbonate, chlorine-sodium and ferrous with increased contents of acid boric. The sources are used, first of all, for drinking cures, inhalations as well as for mineral baths.

The patients undergo treatments of digestion diseases, disorders of metabolism, non - tuberculosis (TBC) diseases of respiration, and treatment after termination of cancer diseases.

The Facts in Numbers