In the past, the sculpture symposium was held every year. Over the years, we have managed to collect about 300 pieces of stone sculptures carved into Istrian stone, a local limestone that is amazingly resistant to the effects of the weather. Stone sculptures have beautified this hill above Portorož for many years. Many other works of art, created over the years at regular symposia with the participation of sculptors from 30 countries, can be found all over the Slovenian coast. 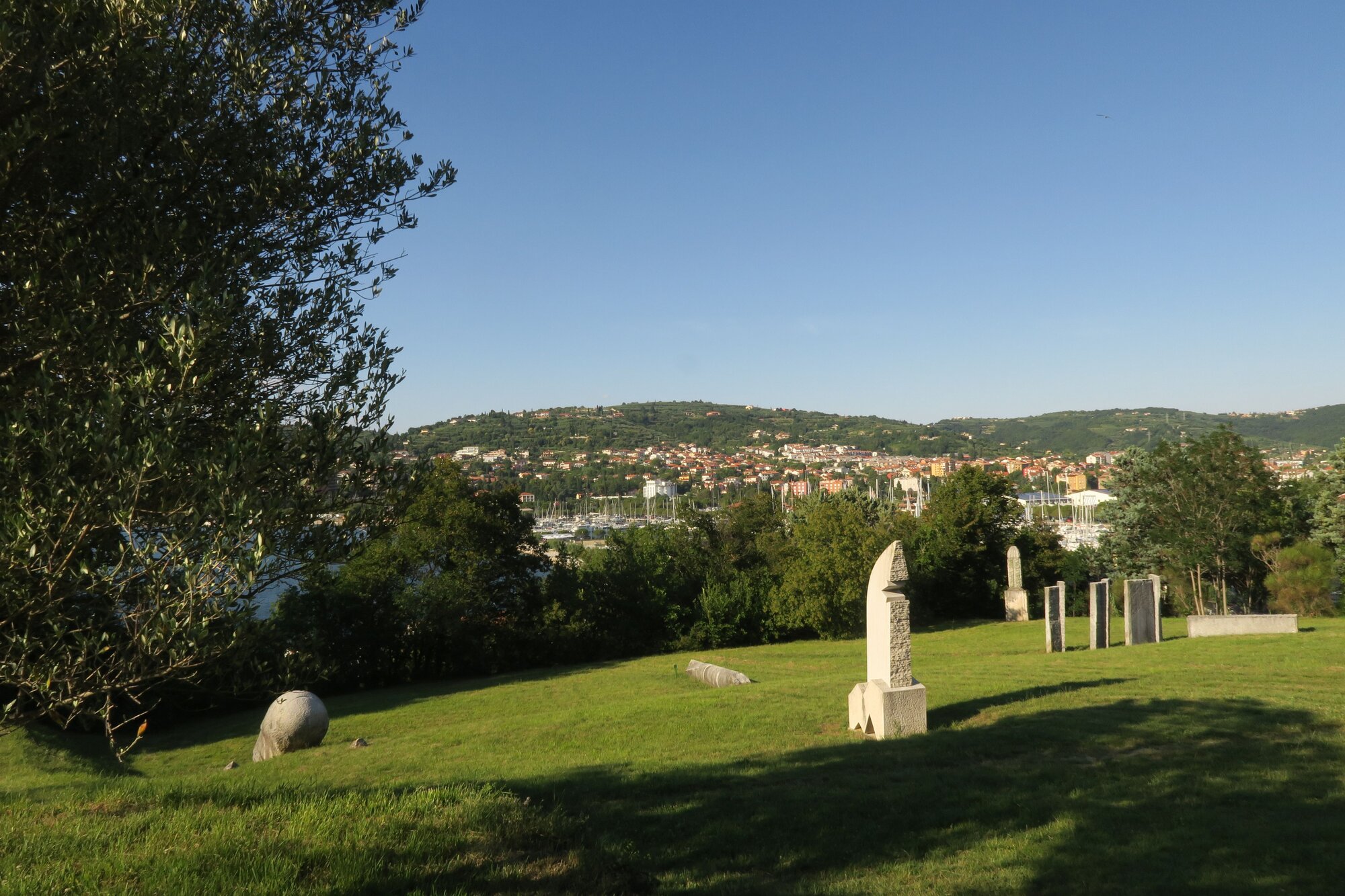 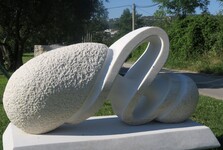 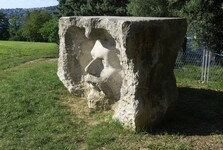 Not far from Portorož do not miss a visit to the Salina Sečovlje Nature Park. The manual collection of salt from salt fields has a tradition of more than 700 years. And it is considered the cultural heritage of the country. During a visit to the park, you will learn more about how salt is obtained from salt fields, what evaporation and crystallization pans are used for, what needs to be added to salt and what should not be there at all, and many other interesting information. When you leave, don't forget to buy salt home.

The last stop remains, the ancient Piran. It is considered the most beautiful city in Slovenia. The locals protect it well, so forget that you would drive to the old center. One large car park is just in front of the entrance to the old center, but it is only for residents or hotel guests. Everyone else has to park above the city in large garages located in a multi-storey house. Don't forget on which floor you park so that you don't look for your car for a long time. Parking is charged. The waterfront is easily reached by lift. 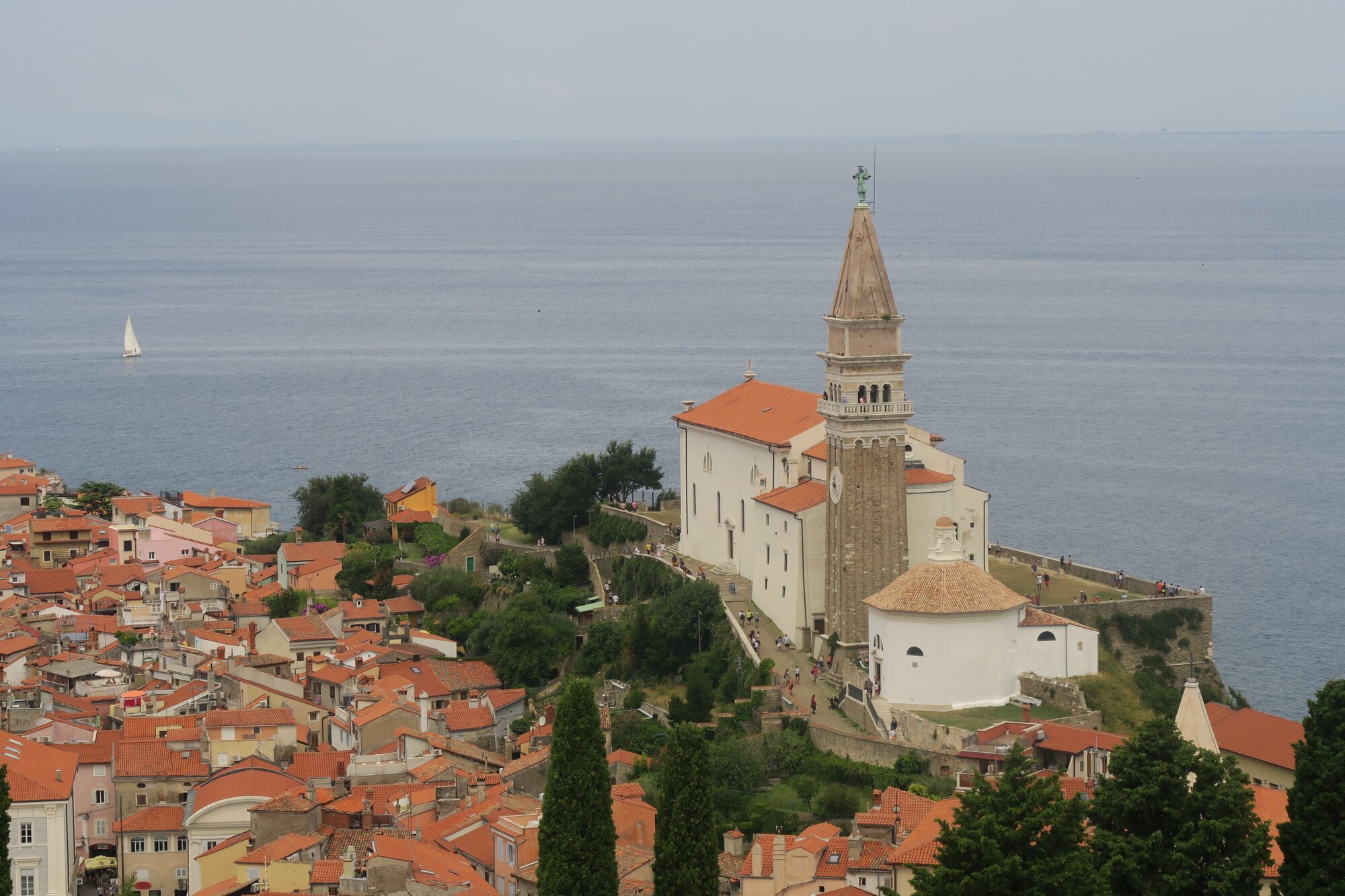 From here you have two options to choose from. Walking along the sea, but you can also use the bus, which runs around and around and will take you almost to Tartini's Square - the main square. The main square of Piran is decorated with a statue of the important Baroque violinist, composer and musicologist Guiseppe Tartini (1692–1770), and you will also find his birthplace here. The square is round, which is quite unusual, but there was a reason, in the past this area was used as a port. 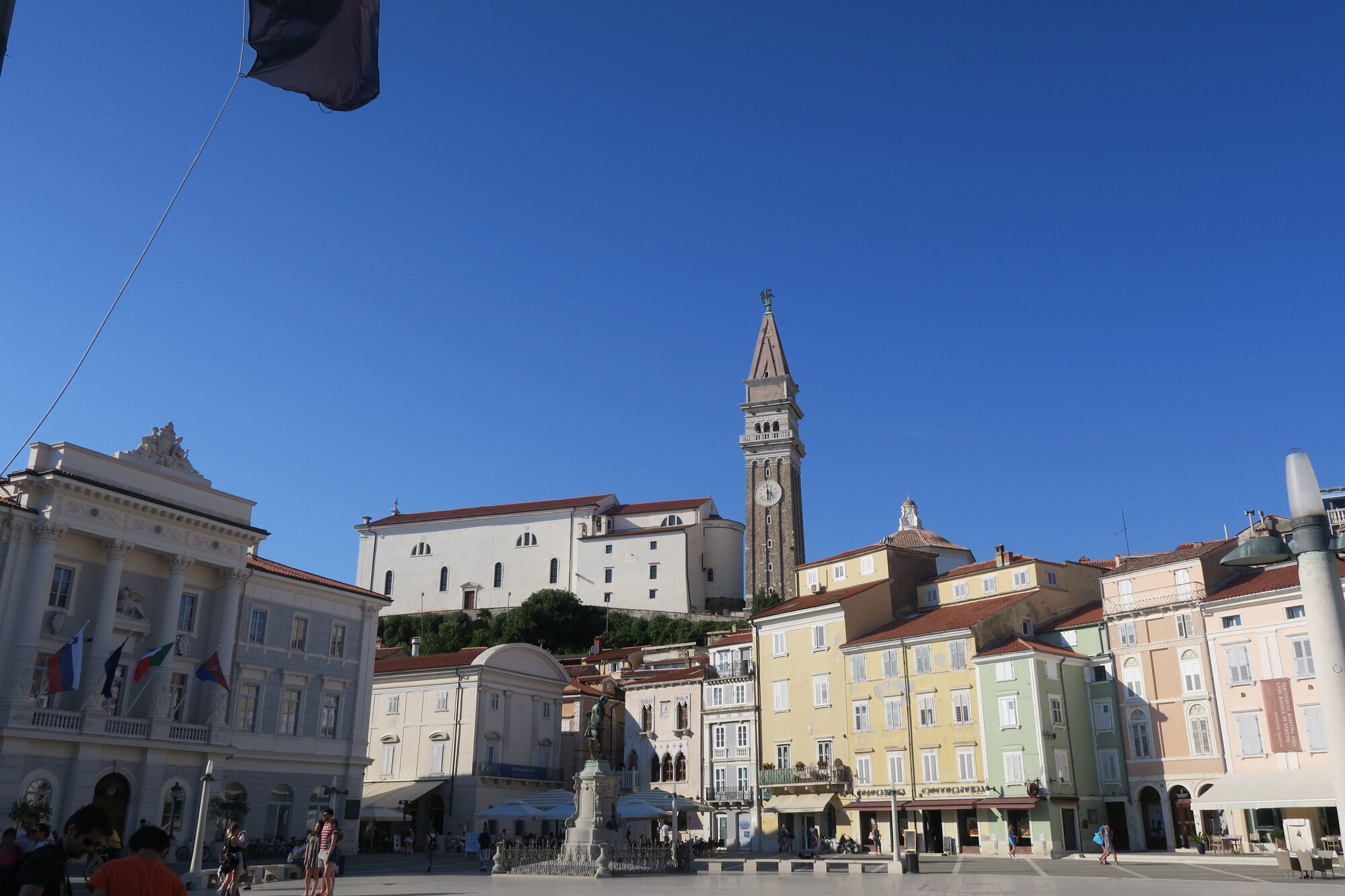 The most important building here is a house called Venetian Benečanka. Its origins can be found somewhere in the 15th century, its architecture falls under the Venetian-Gothic style. Romantic history says that the house was built by a nice rich Venetian merchant. It is said that the locals did not want much love, so the lovers had the following text placed on the building: Lasa pur dir (Just let them talk).

Ascent to the church of St. George is perhaps a duty here. From its terrace you will have an unforgettable panoramic view of the whole city, its surroundings and, in fact, all the way to Italy. 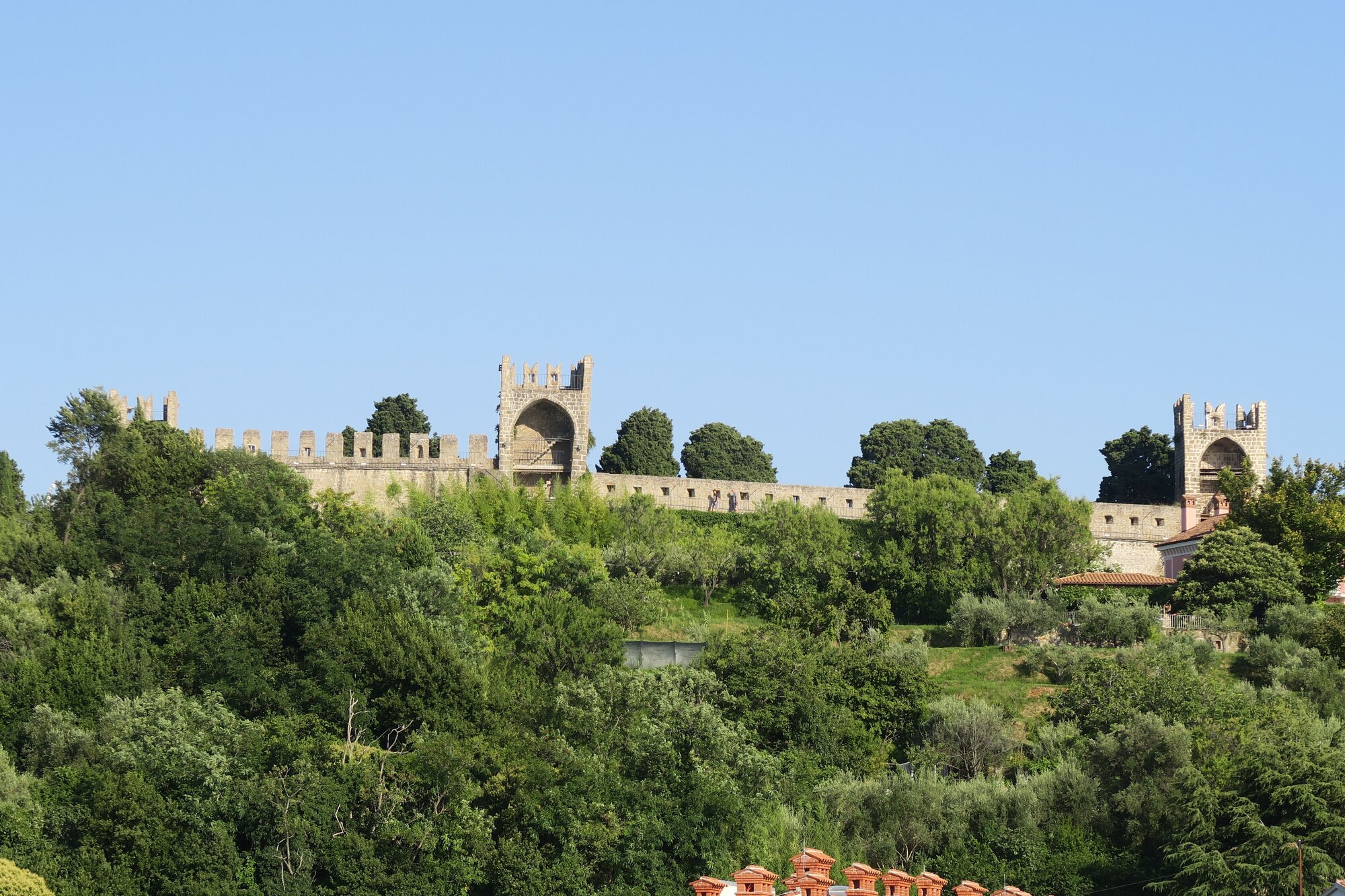 Already in the 12th century there are mentions of this church, but its current form has its origins in the seventeenth century. The biggest rarity of the whole building is the free-standing bell tower, which is a faithful mini copy of the Venetian tower of the church of San Marco. Entrance to the bell tower is charged, but the reward will be even better views than from the terrace.

From the same place you can see the well-preserved city walls. Originally, they formed a 2 km long city fortification. Even the remaining 200 meters form a beautiful backdrop of the city and are definitely worth exploring. In addition, it is one huge view of Piran and the whole bay. Admission is negligible. 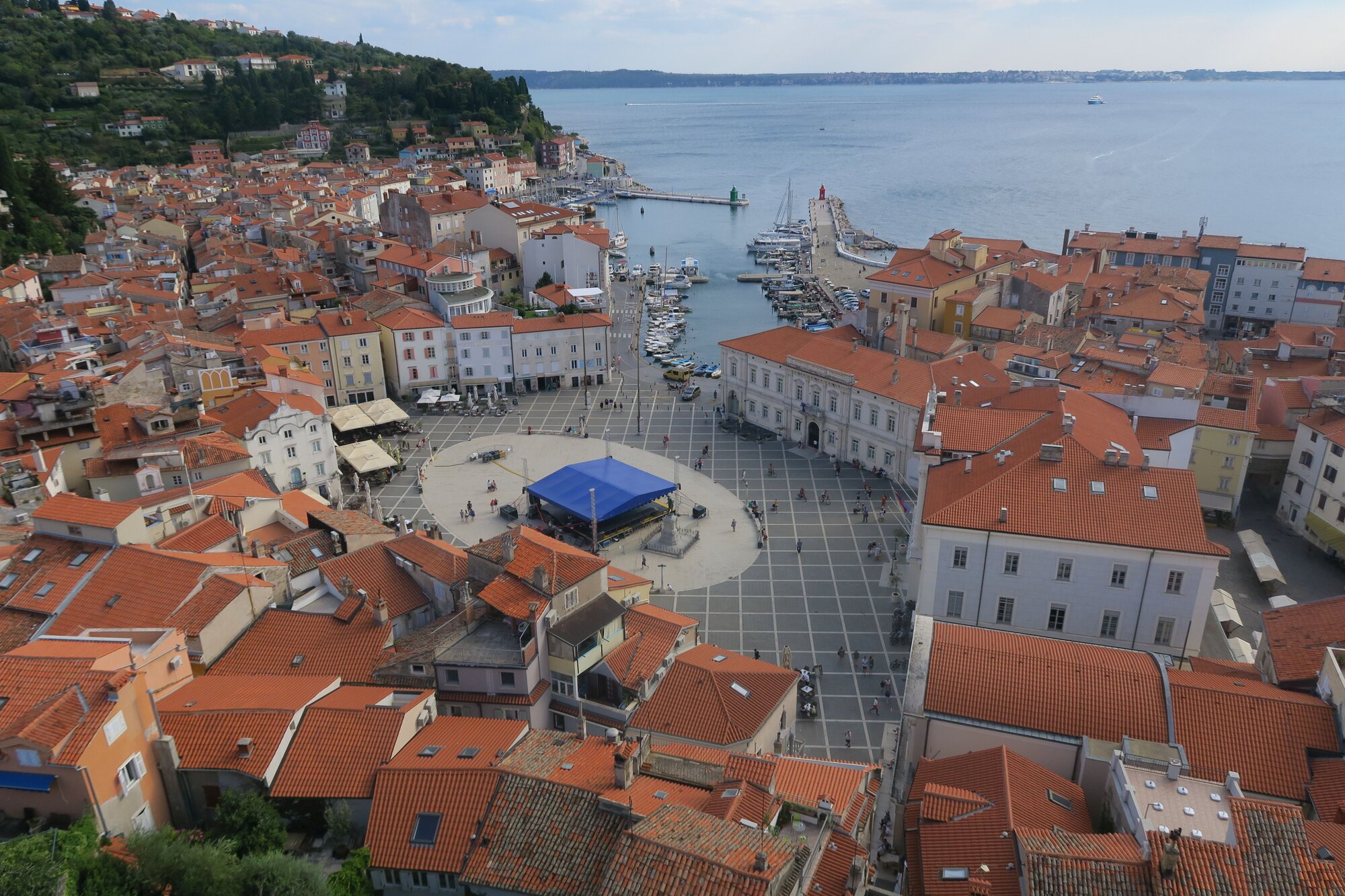 This time we will skip the walls and descend back to the city to Cape Madonna. What you will definitely not miss is the neo-Gothic lighthouse, which belongs to the typical features of this medieval port. If you pay attention, you will discover a statue of a mermaid near the Church of Our Lady of Health from the 13th century. 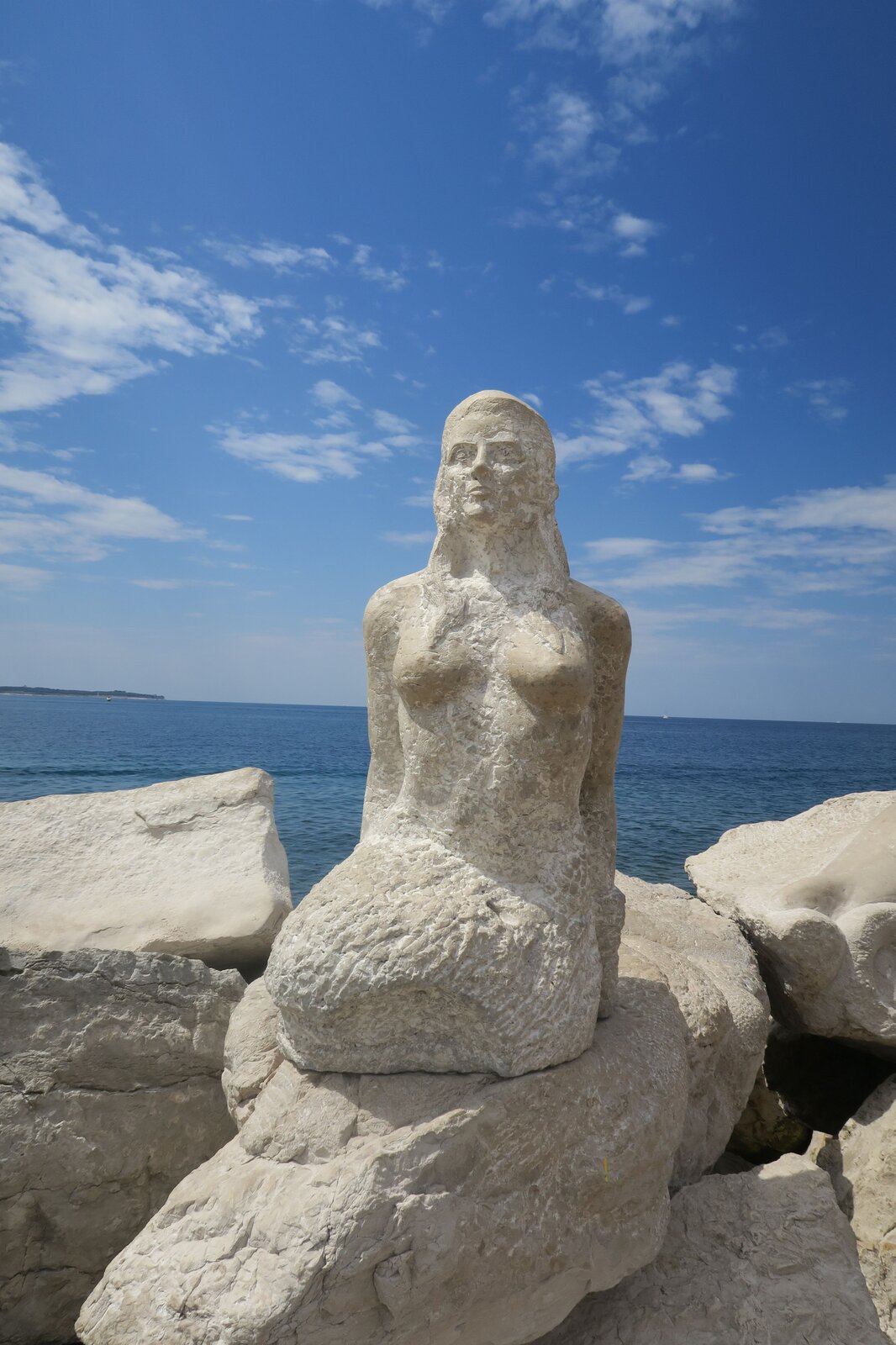 And we are already on the Prešern embankment, where it really lives. Lots of cafes, wine bars, restaurants and pastry shops and it's also one big beach - just take two or three steps from the table for lunch or dinner and jump into the sea waves. Well, you probably won't jump, but you can really swim here, in fact, the whole promenade is adapted for that. 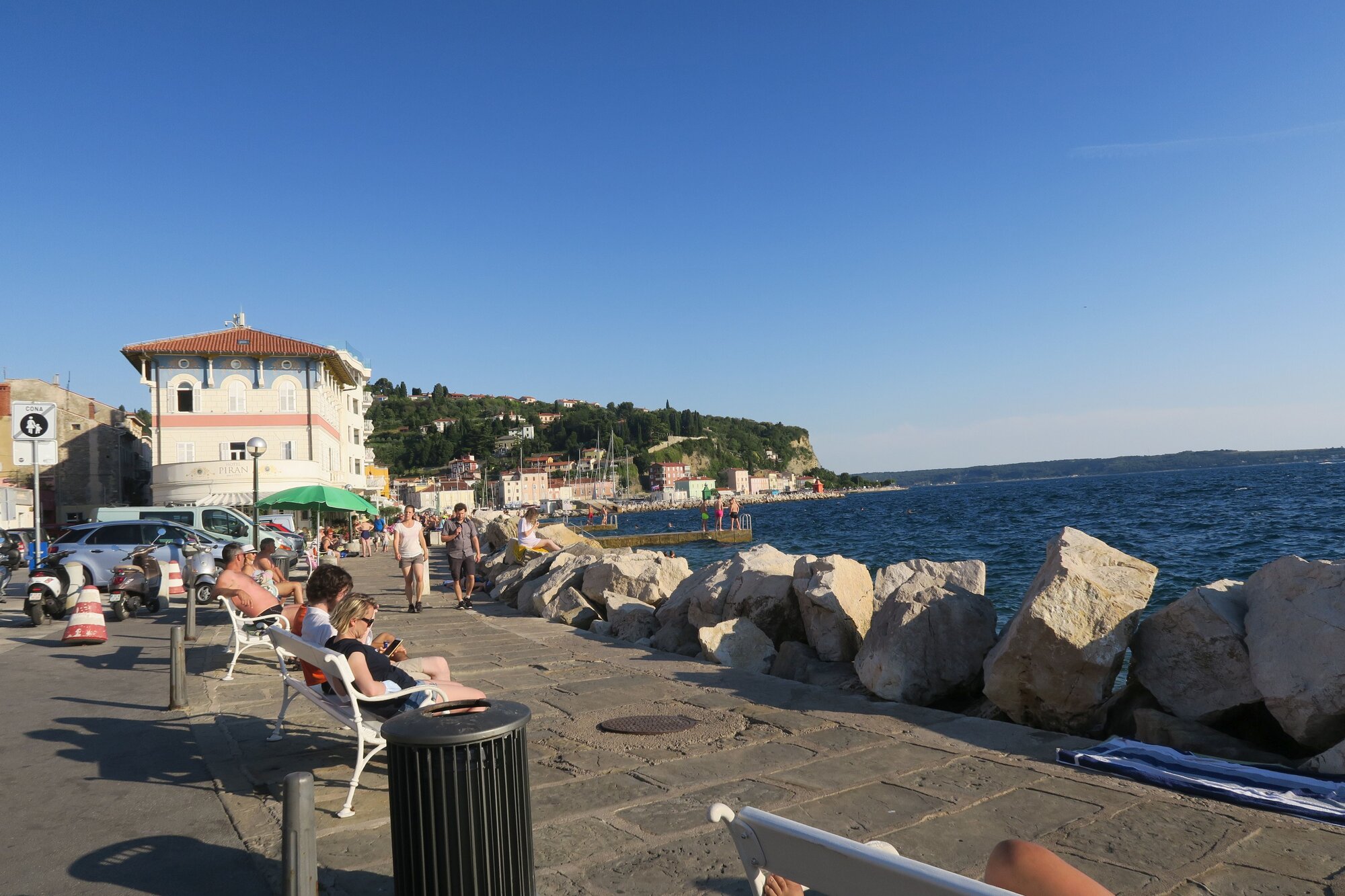 If you are interested in history, take a look at the 1st May Square. You will find it in the old part of town. In the middle is a huge stone reservoir, in which rainwater was collected, so that the locals do not suffer from water shortages during the dry season.

This ends our stay by the Slovenian Sea, tomorrow we leave for the mountains, our destination will be Cerkno.