Year 2014. The dream of our predecessors, as well as the dream of the main visionary of the mass tourism in that area, the lawyer Pedro Zaragoza Orts, came true.. 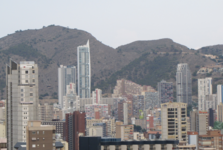 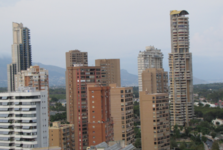 every corner of Europe to spend at least a couple of nights in one of its many accommodation establishments?.

Nejprve se zmíníme o jeho plážích: Poniente, Levante a Mal Pas. First of all, we must refer to its blue-flag labeled beaches. Three: «Poniente, Levante and Mal Pas». Fine sand, gentle temperatures and sheltered by the fact that we are talking

of the Mediterranean. Beware, though, with its oceanic currents and the disoriented sharks that find themselves trapped in the human tide that makes the Benidorm beaches in its peak with its full time bathers..

Although the latter examples are true never in the several times I have been in Benidorm have they not been a problem nor for me neither for others. Benidorm is cool!

There are some facts I would like the reader to know. Are they not interesting? Let´s go to the statistics.

There are alternatives, nonetheless, and the visitor can chose to set apart for a while and visit the neighbor areas that coexist with Benidorm in the region: Villajoyosa, Calpe or Altea. Such a great places to walk in a more airy space where to stretch a bit your sun tanned legs.. 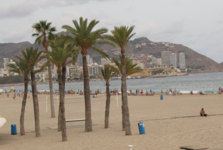 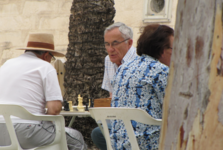 Benidorm is not far from the capital of the province, Alicante. A city big enough (334.678 inhabitants in 2012) to deserve the prominent honor of having a El Corte Inglés, the famous and idiosyncratic Spanish big department stores as a guest.

Alicante is well communicated with Benidorm by Tram, a new regional train that departs from Alicante every half hour taking a bit more than an hour to reach «Beniyork».

Putting altogether one can say that Benidorm is the perfect mixture between beach, Sun, nightlife and dances in one of its multiple Discos and Hotels that apart from composing a more than honorable plan for the visitor - it is cheap! So, let´s go to Benidorm!