The need for the cathedral in Madrid was huge therefore its construction had already begun in the 19th century by the foundation stone of King Alfonso XII. In accordance with the then European fashion original plans allowed for the position of neo-gothic cathedral. Construction began gradually built crypt and other parts of the church. Since the first plans are gradually Gothic Mould and began to mix with elements of neo-classicist. Construction was interrupted several times, the biggest and most serious break occurred in 1965 due to lack of funds. Nineteen years of waiting for the restoration work on such a grand building. The Spaniards, however, waited to see eventually in 1993 the temple was consecrated by Pope John Paul II. It was there Prince Felipe married Letizia. It was the first wedding in the history of this temple. 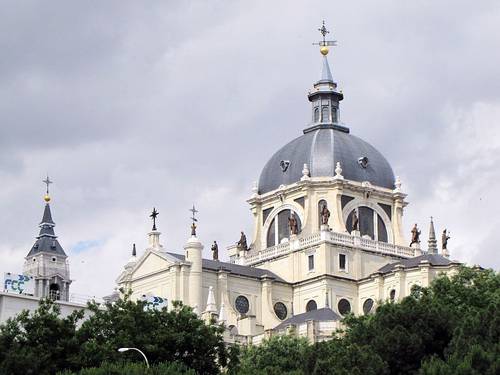 A typical feature of Madrid's cathedral is the dome. It's her twelve statues re

presenting the twelve apostles. The main facade, however, found against the royal palace. It hides four statues of the saints of white stone.

Entrance to the Temple, open daily, is free and available for everyone. Before the entrance gate is a courtyard with a statu

e of Pope John Paul II. Then let it attracted rich and attractive interior, challenging each visitor to go insight the temple. Valuable stained glass, altar table, green marble and high walls will amaze you right after the inside. The church, however, also boasts a number of other valuable works, which are duly proud Spaniards. These include the altar of Our Lady of Almudena, patron saint of the city, or boards with rare paintings from the life of Jesus an

The side chapel of the nave are dedicated to saints such as St. Vincent de Paul. Can´t help but notice the stained glass decorating the apse of the cathedral, and under them seven murals. Show: Baptism, Metamorphosis, Crucifixion, Christ Pantocrator (the Almighty), Resurrection, Ascension and Pentecost.

Almudena however hides much more and enjoy by its beauty takes several for hours enthusiastic admirers takes. So just come and let yourself carry away everything this extraordinary church offers. By its extraordinary charmed everyone, who seeks peace. 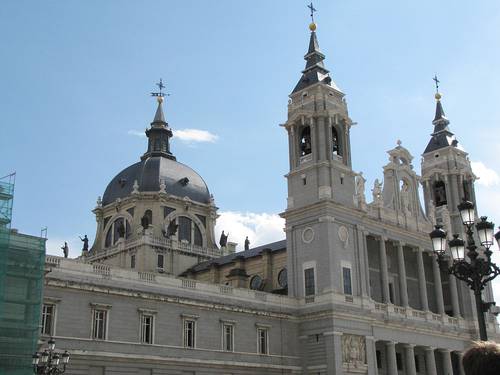