en.infoglobe.cz » Spain, Merida – A Trip to the Antiquity I

The city itself was founded around 25 BC by the Emperor Augustus, at a time when the

kingdom spread to the Iberian peninsula. At the time of its greatest glory, there lived about 50,000 people, which resulted in rich architecture, the remnants of which you can see today. These include the Roman Theater, Amphitheater, Dianin Temple or Casa del Mitreo.

Before we go among the sights alone, we'll take you to the National Museum of Roman Art, which shelves fantastic objects found during the excavations in Merida. You will see everything from coins to sculptures (especially marble bust of Emperor Augustus), glass products, ceramics, wall paintings (eg from Roman theater) to tombstones. In the basement of the museum, archaeologists are still excavating.

From the museum we will move to Roman monuments at last. Let's start with Diana's temple, our favorite among ancient buildings. The huge temple was the main religious building in the city. It stands on an elevated square platform. The front part is supported by six Corinthian columns. Next to the temple, there was previously a garden with a pond. In the 16th century, the temple underwent a radical change because it became a Duke's palace. 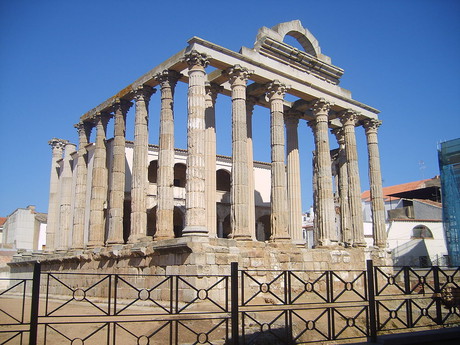 Our next stop is the Roman theater, Tetro Romano. This is clearly the best preserved theater of its kind. The construction was started by the Roman general Agrippa in the year 16 BC, but several decades later he was severely damaged by fire and had to be reconstructed.

Six thousand spectators could fit in the semicircle, and the back wall of the theater boasted magnificent sculptures. Do not miss the visit to the theater and stay here on time. In a few places, you can easily move the past two thousand years into the past and imagine how the people at the time were entertained. 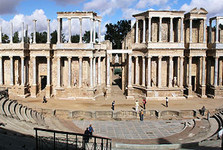 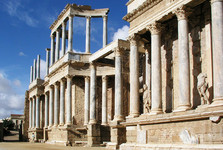 In addition, the theater is still functional and various theater plays, ballets or concerts take place here. For instance, in July and August the prestigious festival of classical theater devoted to classical Greek-Roman theater plays takes place here.
In the next work we will visit an amphitheater and other interesting places that you should not miss.