en.infoglobe.cz » Spain, Seville - The City With a Special Colour

«Seville has a special colour», they say. Seville still has its charm. A charm that it spreads out as an echo around all Andalucía .

The capital of the autonomous community of Andalucía is bathed by the Guadalquivir River, in which shores stands one side and another, being the fifth more lengthy of all the Iberian Peninsula with 657 kilometers.

80 kilometers away from the Atlantic Ocean, the hispalense capital with its Triana , Nervión a Alfalfa neighborhoods, enjoys a Continental-Mediterranean climate with a very dry and hot summers and a soft winters.

January is the coldest month in Seville and July the warmest. In a city where it does not rain a lot, especially during the summer months, the prospect visitor can image how it would be when knew that in 2010 snowed for first time in 56 years. 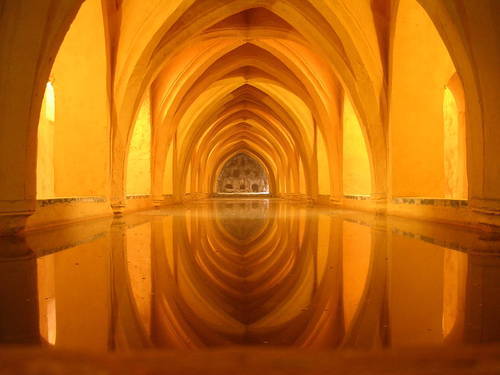 The city offers direct connection with Cordoba in less than 1 hour and with Madrid in 2 hours and a half.

All this is due to the role of the AVE, Alta Velocidad Española (Spanish High Speed trains), Even Obama came to Spain to see if he could implement this transportation in the United States.

But, as we pointed before he who knows Seville knows its «Señora»¸ the Giralda, the tower of an ancient mosque now converted in a Cathedral in which Moorish and Christian art coexist harmoniously in the same space, with the different pieces of art that four hundred years of separation produces.

The cathedral is a World Heritage Site declared by the UNESCO. With its late gothic style it has several gothic and renaissance domes, and iconographies such as sculpture, paintings, silversmiths, etcetera.

Shifting our path, in the Seville´s Plaza de España, inaugurated in 1929 with the Spanish-American exhibition as a motive, the visitor will see this masterpiece constructed by the hands of nearly 1000 workers that put their effort together at once in the construction of this magnificent Square.

he Reales Alcázares of Seville are formed by several palaces that as the years passed by have been kept safe due to its medieval wall. Of Moorish, gothic, renaissance and baroque style, it was lifted over an ancient Roman site, Visigoth after.

This Reales Alcázares where the movie «Lawrence of Arabia» was filmed keeps inside another jewel of the World Heritage, as are its gardens.

Seville is, definitely, a charming city with easy-going and social people. With the sun inside the veins of its culture, no foreign visitor will be shocked about not finding what he expected. «Seville has a special colour» and still keeps its charm.