en.infoglobe.cz » SVK: A Way To An Old Castle Ensnared With Legends

The Old Castle started to be constructed just within 13th century. However, its vitality did not last for long time period. Since16th century, the construction became deserted, as the bigger castle was built on the opposite bank of the river, and so, it took over its original function from the neighbour. And such task was: to watch Pováží ways and to encash the duty. During its existence, the complex changed several namesy, such as: Castrum Starigrad, Owar, Warma of Varín Castle, and finally, it got the actual name - Starý Hrad.

However, when the castle lost its guard function, Pongratz Family moved there, and just this Parentage looked after its development. Several rooms with semi-circle bastions were constructed, including some farming buildings. The castle was increased during the whole century, however, later, even this Family left castle´s walls and moved to more comfortable chateau, situated in the environs. So, a military crew stayed there till the end of 18th century, and when they left it as well, the complex became deserted and it was not renewed to its original face as before.

So, now, Old Castle is a ruin which is not mentioned among Slovak monuments. Moreover, nobody knows who would be its owner at present. Or, better to say, nobody knows who is an owner of an area estate, where the castle is situated. You can reach there, walking along bank of Váh-river during Sunday afternoon. You walk from the village of Strečno, not far from Žilina. A wandering along the river takes approx. 20 minutes, and afterthat, you will enter leafy forest, where even during summer you can find many dead and coloured leaves at roots of the trees. You seem to enter into coloured autumn.

After a couple of minutes, coniferous trees start to increase. On your left part, small torrent is splashing, and when you have a good luck, you can see even some roe-deers or another forest inhabitants. But immediately, when you reach close to castle hill, the mounting is starting to be rather more violent. Anyway, you can follow the marking of tourist trail, so, you cannot loose your way at all. It is worth to follow below your legs, as the roots of trees are sticking out from the earth. Later, when you enter the „courtyard“, you can enjoy the outlook towards the castle, partially hidden behind many trees, which are to be found there. The castle ruin was not reconstructed, so, would you be carefull when you climb on former castle walls, otherwise you could fall deep below the castle. But, on the other hand, an outlook is really beautiful and it is worth for some way of your effort!

In each castle appear the ghosts!

When studying the past, you can find two legends. One of them is describing love triangle. It is a story about castle chief, mayor´s daughter and a boy from outer bailey. As it often happens, the girl pleased to both men. The parents concluded that castle owner could be better choice, so the wedding was organized, and enamoured couple was very disappointed. So, the fiance, in his wounded man´s proud, killed on the wedding day the young boy (in order to rid of his rival). Young bride visited each day a tomb of her lover but  the husband did not allow her to leave the castle. After some time period, he saw, when he drunk a couple of glass wine, a knight, staying above the tomb. He got the opinion that a ghost from the  past would worrying him, he drew a sword and cut off his head. However, he found immediately, that he did it his wife, whereras she visited boy´s tomb disguised. But when he could get a breath, a lightning stroke him, and he was immediately burnt to an ash.

The second legend is not too merry as well. It describes a story about a knight, who found his hobby in groundless killing of people. It did not matter, who would be his victim. He killed men, women or children, not looking for any reason or pretence. Anyway, on one day, he met a hermit and attacked him. He had no time to defend himself against his assassin, so he imprecated him for everlasting anxiety and trouble, till a time when castle ramparts would not be collapsed into Váh-river.

The older inhabitants believe that even by merit of this threat the castle ruins are still complete, even after so many centuries. They describe that a knght is wandering inside its walls. You can easily believe such story when you hear whisper of ghosts instead of fine breeze. So, attention, please, the ghost could jump suddenly there and you could fall downstairs instead of him! 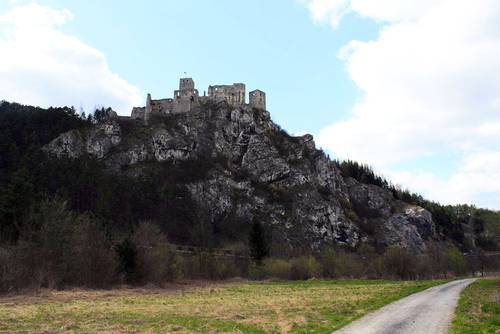