en.infoglobe.cz » Sweden, Between Göteborg and Stockholm II. – Deep into the North

Stream of water and pasture with cows separated the train station from Bohus castle (Bohus Fästning). Only huge highway disturbed the image of peace. It is the only obstacle when one wants to climb to the 14th century stronghold, in Kungälv village. You can pay by Visa or MasterCard in a bus. Two kilometers would cost us 40 SEK (according to us the cheapest rate for a ride between the places). One Swedish driver took a pity on us. She gave us a lift and she needed only one “tack”, or “thank you”. 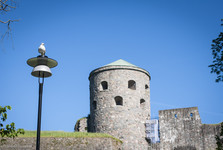 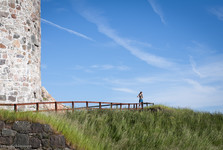 A 370-km long tourist trail Bohusleden starts at the ruin. Orange strips on wooden stakes guide travelers from Blåvättnerna to Strömstad. We let ourselves to be guided through thick peg forest when we were trying to find a place to camp for the night. We got at „Hålta kyrkogård“ cemetery. The cemetery is fascinating for its large area and how well maintained it is. For us it is place where we learned how the Swedes honor their dead. However, it was difficult to recognize where the cemetery starts or end and we still don’t know today if we slept on the territory of the dead or the living. Merry voices of some Swedes who passed by us in the morning calmed our worries. They talked to us even they didn’t understand us. Everything seems alright in Sweden. 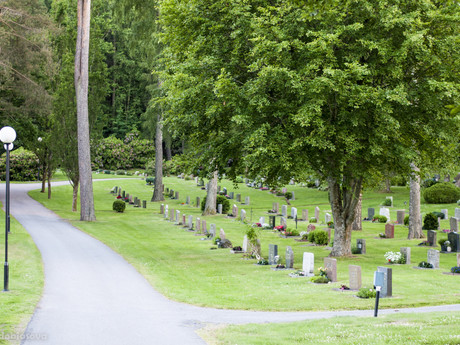 Here I would like to explain the Allemansrätt law or the free movement in nature law. Thanks to this law one can even step on private land. Also people can build tents anywhere except for agricultural land or near a house (only when agreed by the owner). The Swedes know this law however they recommend to not to stay more than one or two nights over. 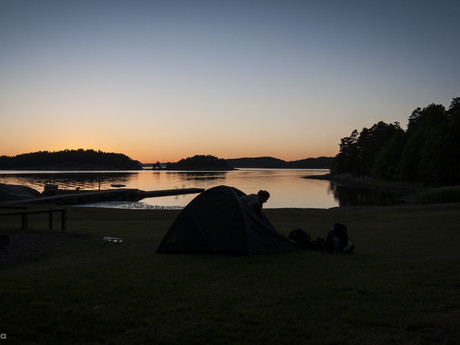 Later we joined the distance route between the towns of Ljungskile (there I left for someone Citadel by Exupery with a written dedication) and Uddevalla. The blue route between the cities is 45 kilometers long. We built our tents at public coast bathing area. Families and their children, truly thrilled about water despite their lips turning blue, swarmed in with the first sun rays. 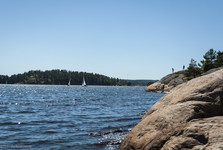 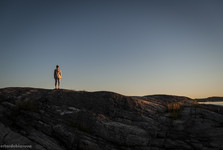 We also had our first major realization. Swedish conception of distance is absolutely different. In the morning, one man assured us it is only 15 kilometers to Uddevalla. Another man, after exhausting journey, assured us it is mere fifteen kilometers to Udevalla (in Hunneberg forests it happened to us that on every second kilometer we encountered a board suggesting only 10 kilometers was left to our destination). Fortunately, his son gave us a lift to the nearest bus stop. So we rode the endless kilometers on bikes. 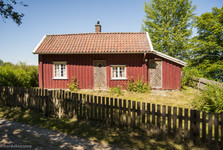 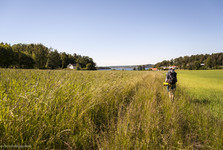 Uddevalla is in Västra Götaland region. The city is the industrial center of the west coast. You can travel by boat form the city center Gustafsberg cliff for a small fee. There are beautiful wooden villas, a small green spot where you can bath. Coast cliffs are lined by a suspended bridge, like a snake, which further enhances the scenery. The boat sails back after an hour. It anchors at the visitor center. 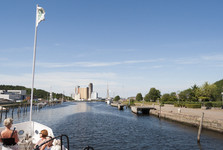 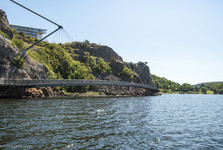 Salty experience would be replaced by the woods and wild nature of Sweden - concretely Halle-Hunneberg ecopark where live bears, elks, and little biting flies.