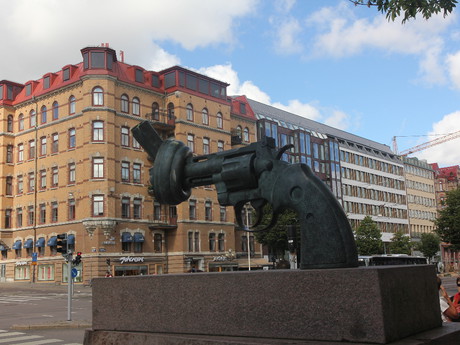 We go on and see a statue of Poseidon at the end of the main boulevard in Göteborg - Kungsportsavenyn. People call it Avenyn for short. The future cultral center of the city opened in 1923 during an industrial exhibition. The construction begain in 1921. The structure was designed by the architects Sigfrida Ericsona a Arvida Bjerkeho. 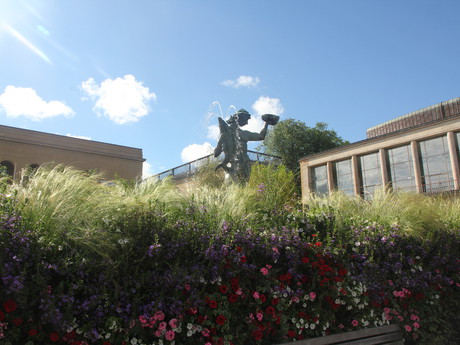 The Art Museum is situated end of the south part of the boulvard. It holds 19th century Nordic art. The most interesting section is the Fürstenberg gallery. The building of the museum is made of classic Nordic yellow bricks (as designed by the architect Ericson).

The best view of the boulevard is on the top of museum's stone stairs. The street is right in front of you. There you can take pictures of other important landmarks such as the Municipal Library, Municipal Theater and Concert Hall. 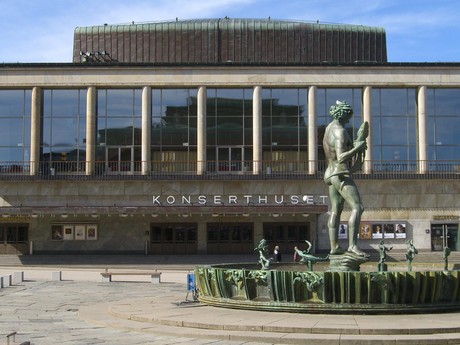 The latter building was constructed in 1935. Outside it looks classic. The concer

t hall is tiled with marble. Inside there is place for up to 1300 people. The Swedish National Orchestra, a symphonical orchestra founded in 1905, resides and performes here.

Let's get back to Poseidon. His statute became one of the symbols of the city. It was created by Carl Milles. Fountains were among his best works. He was born in Uppsala, studied art in Paris, he lived in South America, and later he settled in Sweden.

Haga is another goal of our visit to the city. It is a workers' district. There are old wooden houses with groundfloor made of stone and many beautiful shops. It will take you into the past. This is where you can spot how the city has changed throughout the decades. We already smell what is local specialty - huge cinammon rolls. They look tasty but their price  of 150 Czech Koruna is too high for us. 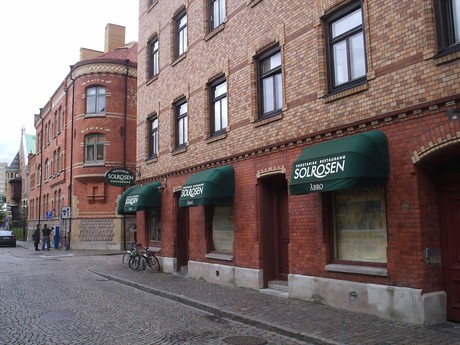 We walk through the streets of the old town. Then we reach the channel which goes through downtown. We come closer to the large fish market of Feskekörku. Formerly, there used to be an outdoor fish market. Men caught fish and sea fruits, women sold them. However, they were cold. Somebody got a brilliant idea to make a roof over the entire place. Well, this is what the local say. In reality, the architect Victor von Gegerfelt got inspired by wooden Norwegian churches and stone Gothic cathedrals. This led him to create what was quite a futuristic experiment which looks great even today. 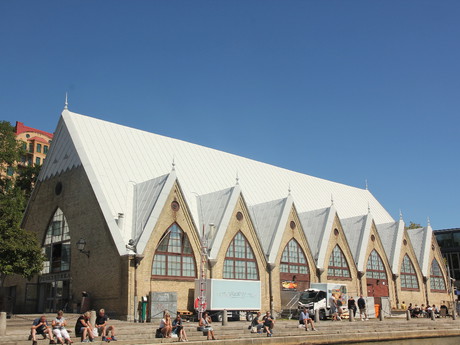 We go inside where we feast our eyes upon the beauty we see. So many fresh fish! I have never seen so many of them. Well, not just fish. There are all kinds of sea fruit - crabs, shrimps, oysters, octopus, caviar - simply amazing! Caviar truly is not a product which would be in short supply here. In local supermarket you have an entire shelf full of caviar. The price ranges from 60 to 200 Swedish crowns for a packing.

The weather improved. We buy tickets to a boat and set off for a cruise through the cannales.  While on our way we even get into the port and we even sail in the open sea for a while. It is really nice cruise. A young lady drives the boat, another one talks in several languages about things around. The channel goes alogn some really interesting places we will visit in the afternoon. One of them is Gustav Adolfs Torg square with the statue of Gustavus Adolphus and next to it is a church dedicated to his daughter Christine. 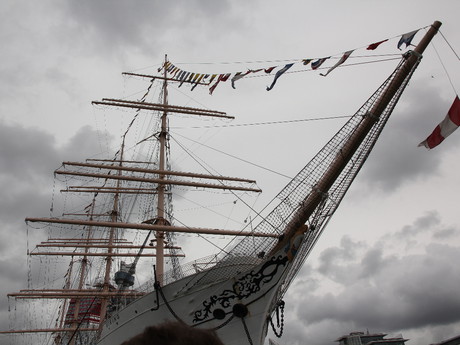 During our cruise we sail under many mostly low bridges. Usually you need to duck when there is high water level or you can hit your head quite badly. We enter the port and there we sail by Maritiman museum.

The city is full of interesting things to do. Next time we continue in our visit.