en.infoglobe.cz » Sweden: Nordic Cities III – Göteborg – Moving on in the Tour through the City

Another devastating fire happened in December 1802. The church was completely ibliterated. The architect Carl Wilhelm Carlberg created the new one and he also designed other buildings in the city. The cathedral was finished only in 1827. Since then, seveal reconstructions happened. The last one was between 2013–2015. In this church, gas illumination and heating was used for the very first time.

The park around the cathedral is a great calm zone and popular place to take a break. There is also one of the oldest wells in the city. It is still in operation.  park je klidovou zónou a oblíbeným místem k relaxaci. Nachází se zde jedna z nestarších studní ve městě, která je ještě stále funkční. A statue of Peter Wieselgren's , he was an imporant dean and advocate, is situated in the park. He sought to make the church acessible also for poor people in the time when church benches were being rented.

The tour continues towards Queen Kristina's lutheran church – Tyska Kyrkan. Queen Kristina was the daughter of Gustavus Adolphus. She was an important persona in the history of Sweden. She caused several scandals during her life. The largest of them being her conversion to the catholic church even though her father was a protestant and fought against catholics. 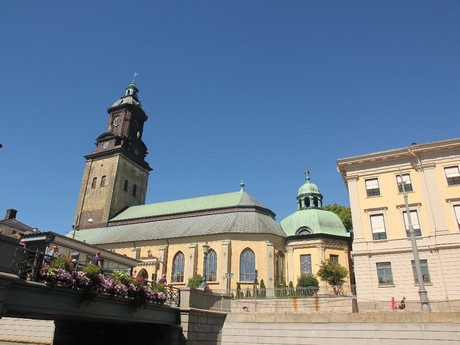 We walk across Gustav Adolfs Torg sqaure with a city hall and stock exchange. This is, however, not your classic stock exchange. It is a space dedicated to trade negotiations and closing contracts. Local traders all shared money to build this building and it has been used for the same purpose ever since.

Kousek odsud je další zvláštní objekt – Kronhuset is quite a strange object near from here. It was built in the Dutch style between 1642–1654. The building is made of red bricks and has a green roof which is also used for window shutters. In the past, Kronhuset was a barracks and armory storage. Today, there is a museum and a concert hall. 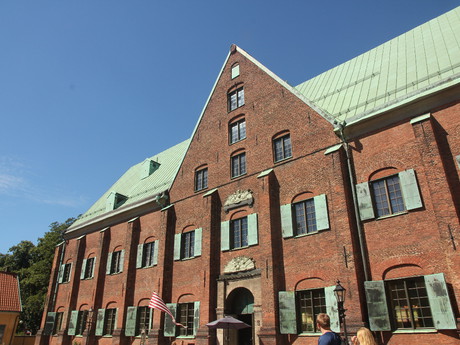 Slowly we are getting away from the old part of the town and move to the coastline.

A futuristic skyscraper is visible already in the distance. It is called "the lipstick". And it is very unlikely that you wouldn't be able to find it. If it happened though, just ask the locals for Utkiken. It was opened in 1989. The skyscraper is 81 meters high and to get to its observation deck you need to climb up 23 floors. Don't worry though, you can take a lift. The view is amazing. However, the only disdvantage is its operating hours. The observation deck is closed on the weekends.

Our joined route ends here. Now it is upon every indiidual to seek his own way in the city. There is one of the largest shopping malls in Europe, a beautiful park with a rose garden, or the aforementioned Maritiman Museum - my choice.

The museum consists of several anchored ships in the harbor. The ships are linked one to another by small stepladders. The best experience is to walk through a destroyer and a submarine. I start in the submarine. Inside it is really small and I only barely manage to get through roundish doors because my photo-backpack is very large. At one moment, I even got stuck and had to ask another visitor for help. 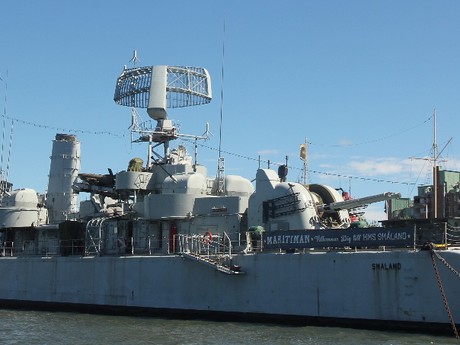 Ther destoyer truly is something short of spectacular. Its spaces are large and it seems like a labyrinth. By following red arrows you will get to almost any part of the ship, to lower deck or to the bridge. There are even a figurines representing sailros "in action". Everything seems very plausible. Be sure to make enough time to go throughly through the ship.

We make a stop before the Svinesund Bridge which constitutes the border between Sweden and Norway. There is a painted line almost in the middle of the bridge – one of the sides is called Sverige the otherNorge. We take necessary pictures and then go back into the bus which then rides tu Camp Høk.

Next Saturday, we move to another interesting city – Oslo.