NP Ngorongoro also known as Ngorongoro crater is alomst 200 kilometers away from the starting point of our trip (Arusha). The undamaged caldera which is not covered by water. It is also the largest caldera in the world – no other surpasses its with of 19th kilometers. The crater emerged after a volcanic explosion after the volcano collapsed. 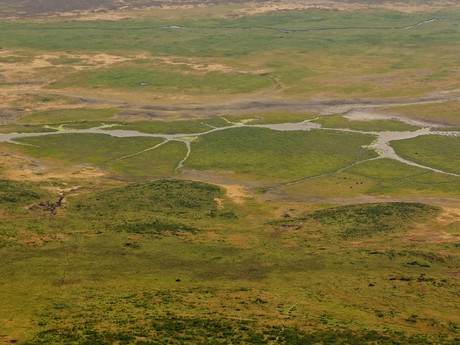 We enter the compound. What we see is a vast landscape. A herd of zebras, an ostrich, or even secretarybird. Secretarybird is an interesting and large bird. It lives mostly on land. There is a reason why it is called as it is. The grown up individual can skillfuly chase snakes (even venomous). Nowhere else in Africa can you see it freely in the nature. It is endemic to Africa. However, it is wildly popular in the zoos across the world. 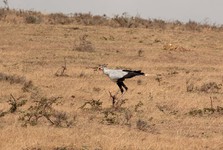 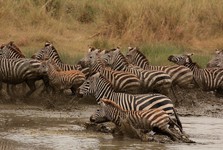 We ride across colorful landscape, observe the surroundings... all of a sudden we had to stop. A flock of vultures sits on the road eating a dead antilope. It takes only couple of minutes. Then another actor – spotted hyena came onto the stage. There are about ten vultures. One hyene is enough. It shows its teeth and vultures retreat and fly away. 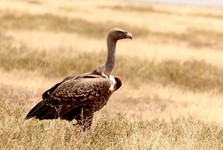 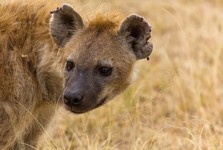 We really had a great guide. Thanks to him we would experience many unforgettable moments. We saw something happening at a tree which we were slowly approaching in our car. In such moments it is vitaly important to take the best position to enjoy the view of a group of leopards hidding from us. For a while, we stand at a rock. Everything fits perfectly into the scope of our camera- Leopard often dwells up on trees. It takes its prey up to hide it form other predators. Sometimes he attacks even rodents or antilopes (most common food) up from the tree branches. 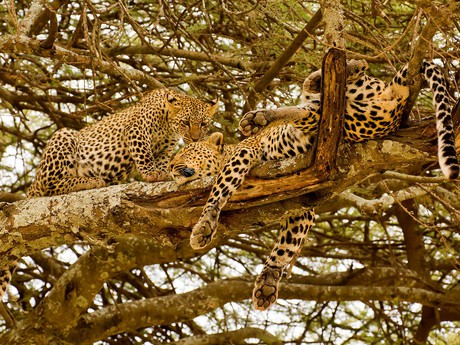 It doesn't chase its prey for a long time even though it can run as fast as 58 kilometers an hour. There are two baby leopards in the group of animals we see. They don't seem to even notice us. Their momma rests for a while, spends some time to take care of her offspring. We stay glued to this vista. However, we realize we have not much time. Pitty. However, we need to get back to park's entrance. Anyway, I took some of the best pictures there.

We leave the park just at the right time and move to Mapito Tented Camp where we would spend the night. It is truly romantic place. Huge tent construction, comfortable bedss inside and amazing bathroom. A wall runs along the tent. It has no roof whatsoever. You can observe the skyline at night or look forward to seeing a wild cat that could sit onto a tree just in front of you. When you get back to your tent after dinner, a Maasai patrol accompanies you back to your tent to make sure nothing would happen to you. This probably is the best place we stayed at throughout our journey. 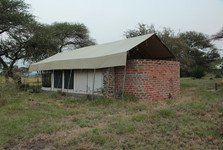 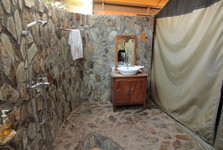 We enjoy the following days very much. There is everything you can want in Serengeti and Ngorongoro. Serengeti is the largest national park in the area. It covers 15 000 km2. Also, it is one of the most well known protected areas in the world. It has been guarded since 1929 due to ceaseless stream of hunters. It was declared a national park in 1951. Thirty years later it became a UNESCO biospheric reservation. The name of the park comes from the Maasai language. The word serengit means endless plains. You can see the members of the Maasai tribe when they are on pasture with their cattle. Be ware of taking pictures for somebody can throw a stone your way. Everything costs money. If you want to take pictures you must pay. I have to say, however, that it was quite underwhellming experience at the Maasai village.

If you want to see the village be ready to pay about 50 American dollars for one car. Then you will be heartily weolcomed. They will dance with you and show you entire village. Take a look into their dwellings made of clay. You will learn that the Maasai practice polygamy. One man can have even 15 wives and sometimes even 70 children. A father chooses the first wife. Than a man can choose for himself. Only the one who has a lot of cattle can have a numerous family in order to feed it. The Maasai have redish clothes - the cloth is not hand made but made in factories. 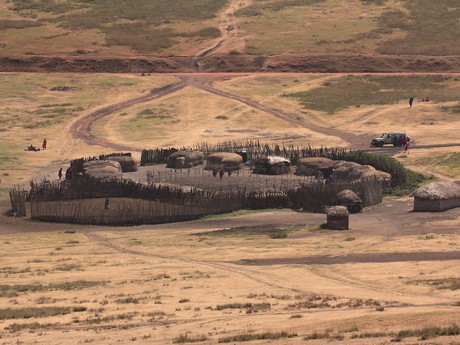 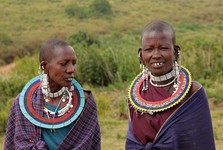 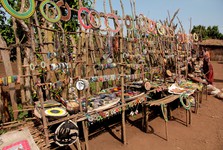 Once you walk through the village you will enter an area where you can buy hand-made items which are on display there. Unfortunately, you are being agressively persuaded to buy mostly overpriced items. The inhabitants of Mount Meru were much more friendlier and nicer.

We don't let ourselves down and set off to the lake of hippos. We tell you about it next week.