It is true that Tatarstan does not belong to the greatest Federative Republics. Nevertheless, Kazan is very interesting town, and so, a stop there is a must, owing to the fact that hardly anybody from the Europe could have some detailed information about such locality. So, I try to grasp all places of interest which this region and town could offer.The Republic of Tatarstan is placed along Wolga-river, and belongs to those mini-states of original Soviet Union which had relatively close connections to uneasy Moslem areas. All these territories form religious as well as ethnical majority and proudly proclaim their Tartar origin. And just actual Tatarstan is main centre from original eight millions of Tartars, living in Europe. On the other hand, we can meet them even in neighbouring states (outside Russian Federation), such as: Usbekistan, Kasakhstan, and even great part of them are to be met in Siberia. As far as the religious confession is concerned, the Tartars could be ranged to Sunnite Moslems, but, apart of this, quite strong branch of so called Kryasens, who confess Ortodox faith, could be met there.

Kazan is well-known, as, first of all, the town of many sporting clubs, i.e. AK Bars Kazan (ice - 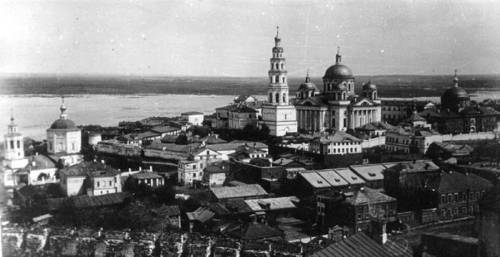 hockey team) and Rubin (football team), actively participating in European Cups. The locality is placed along west bank of powerful Wolga-river, at confluence with smaller Kazanka-river, and it is included into Wolga Federal Circuit. Anyway, in general, it could be ranged to European part of Russia, with its culture level as well as standard of living. Kazan has approx. 1 140 000 inhabitants, and so, it takes the eighth place on scale of Russian towns, after Omsk and before Tschelyabinsk. The first notice, regarding the establishment of the seat, is connected with arrival with Wolga Bulgarians, sometimes within 12th century, but this fact was not fully confirmed. The oldest excavations brought even a coin of Bohemian origin (of 11th century), with a picture of St. Wenceslas. So, the history of such place could be rather quite interesting. Anyway, real swing of the town came since 14th century. At that time period, the means of payment started to be coined, the building activities grew, especially within scope of Kazan Castle - i.e. defensive stronghold, forming a base of future town. During that time, very important merchant way between Scandinavia and today´s Iran led through. This fact was guaranteed by busy trade movement. So, big bazaar - trade and exchange centre was founded, very important for the whole area of so called „Golden Horde“, a part of Mongolian Great-Empire, extended from Europe up to Siberia. However, even such mega-state was disintegrated, during middle of 15th century, into several smaller khanats - smaller complexes, relatively independent from administratively point of view. Kazanian Khanat, as a predecessor of actual

Tatarstan Region, was really out of proportion prosperous tereritory. This region tried several times to conquer Russia, with Tzar Ivan IV. the Terrible, as a leader. Finally, he was successfull in 1552, and so, he joined the town, including some new territories, to Russia. However, the town, including its original inhabitants, was fell out into oppression. The Tartars were forced to confess the Christian faith. Such act brought many victims. All religious buildings, Mosques and churches have the traces of later negative style of Russian destructive power. It is true that Khanat was later renewed for short time period but Russian supremacy continued ahead by means of „very strong hands“. During rule of Tzar Peter the Great (beginning of 18th century), the town became an important centre of ship manufacturing, destined for Caspian vessels. However, rebellious Cossacks, together with Tartars, made several bloody riots. As a consequence, the town was practically destroyed and renewed later, during rule of Tzarina Catherine the Great. Islam religion was legalized but despite of this, discredited, and the same destiny caught original Tartar population.

At the end of 19th century, Kazan became an industrial centre, similarly, as most of Russian

towns at that time period. Although the growth and income of new inhabitants came, even the integrity of original Tartar nation became strong. The newspapers in Tartar language were issued, Koran was printed, even the theatre was open for public. However, after Bolshewiks´ assembling, the town became a centre of Tartar Autonomous Soviet Socialist Republic. The territory was inhabitated with approx. 200 000 inhabitants. The Mosques and the churches were destroyed again. During the 2nd World War, (or, better to say, Great Patriotic War) massif industrial production of tanks and planes, destinated for East Front, was concentrated there. This fact brought the growth of inhabitants. At the end of 1950,more than half a million of inhabitants lived there. The construction of dwelling panel houses as well as the industry temptated in the region nearly 800 000 inhabitants. They settled their families here, and now, the region is inhabitated with actual 1 400 000 persons. Nevertheless, the fall of Soviet Empire brought again the swing, first of all, of Tartar Islam cultural life. The centre of metropolis undergone an important reconstruction. In 2005, on the occasion of 1000th anniversary of town´s foundation, the greatest Russian Mosque and new tube (metro) were solemny open for public. Kazan Cremlin - local castle and a symbol of Tatarstan, belongs, no doubt, to most important sightseeings of the town. It is the only preserved Tartar citadel in Russia, and an important shrine at the same time. The complex is consisted of a group of historical buildings and rests of earlier buildings from 10th up to 16th centuries. From that reason, Kazan Cremlin was registered in UNESCO Wolrd Heritage Survey.

Next centre of education - The University of Kazan, and Mosque Qul-Sarif, (mentioned

above), are placed in west part of the town. However, original Mosque was destroyed during attack of Ivan the Great troops in 1552. The actual building started to be constructed in 1996, and it is built in traditional architecture of Ottoman Empire. This complex is surrounded with four minarets, 57 metres high. As essential building materials, the granit and marble from Ural Mountains were used, the interiors are decorated with carpets from Iran, crystal chandelliers from the Czech Republic or stuccos and mosaics from Saudi Arabia. Qul-Sarif is taken for a symbol of common life (coexistence) of Moslems and Orthodox persons in Tatarstan. This complex of buildings serves, except main Mosque, first of all, as a Museum of Islam faith, library and a seat of Imam. Not far distant from this complex, Peter-Paul Cathedral - Orthodox Church Complex of buildings of Baroque style, is to be found. This complex was constructed, as a memory of stay of Peter the Great there at that time. The Cathedral was built during 1723 - 1726 on place of original wooden church. However, the church was closed in 1939, and it was not used at all for next coming fifty years. Anyway, this building belongs to a few very well preserved church constructions of former Soviet Union. The c

omplex is attractive, thanks to its unusual architecture and unprecedented modesty, especially, making comparison with near ostentatious Mosque.

Kazan is distant approx. 700 kms from Moscow. Another important towns of Tatarstan are: Samara (300 kms), Ufa (450 kms) and Perm (500 kms). Today´s Tatarstan and Kazan, as well, belong to most richest Russian Regions. Local standard of living is four times higher as the average in the rest area of Russia.

Very clear pedestrian zones in city centre are bordered with shops of world fashion brands and fastfoods of western style. All seems to be unusually non-Russian, accessible and friendly. Nevertheless, attention, we are still in former Soviet Union, many matters changed but some negative spirit of past time remained. In the environs of always increasing town, new dwelling panel quarters and parks are being built. Damaged monasteries or smaller Mosques or Moslems´ houses of prayers are renewed. Anyway, proletariat quarters still exist along wild outskirts, but this fact must be taken into consideration, of course. The Russian spirit is in coexistence with some portion of Arabian disorder. All this scene is under sever view of several Lenin statues, still popular local personality, but „stiffed for ever“, fortunately.

Local continental climate is, owing to south position of the town, relatively warm. Despite of this, the average temperatures in winter drop to - 14 °C. On the other hand, the average temperature in summer reaches + 19 °C. Formal power is in hands, first of all, of Tartar President and Mayor. However, the Moscow´s point of view is still authoritative. Till now, Tatarstan is an important centre of industrial production, first of all, in military and civil aviation (Tupolew), and in

production of lorries (Kamaz - with its slogan: No roads? No problem!). As a big potential, it is also own intellectual as well as scientific backround of local Universities and Research Institutes. You can find there pharmaceutical or caoutchouc factories (40% of total Russian production), petrol, being worked in local factories, and, first of all, rubber works, supplying Russian Market with more than 30% of all vehicles and tyres. Nevertheless, the greatest share of production volume has: the excavation of raw materials (33,1%), the manufacturing of means of transport and equipments (12,3%), the production of chemicals (11,9%)), and the manufacturing of petrol products (9,4%). As a main transport-industrial line of communication, it is Wolga-dam or river navigation, including important railway junction Moscow-Kazan-Iekaterinburg. Also an international airport, with busy traffic, is operating there, thanks to many groups of investors and enterpreneurs, who would like to use fully local potential. So, it is valid that Tatarstan as well as Kazan become, first of all, trade centres, more as any other holiday and relax potential. Apart of this, you would feel resolutely better, as in expressively poorer Republics and towns of north-east part of Federation, which we visit in our future chapter.

So, thas was our small stop in one from most interesting but relatively unknown town of Great Russia. It is true that we made small branch-line from our journey to Russia. I believe that we could meet for the next time maybe in Nowosibirsk or in Irkutsk!