en.infoglobe.cz » The Island of Bali and its Two Significant Sites

Hinduism is the predominant religion with its temple architecture being one of the biggest tourist attractions here. Bali has a number of important “sea temples” which were founded in the 16th century by a Javanese monk named Nirartha to honour the Gods of the Sea.

Temple Pura Luhur in Uluwatu, located at the southwestern extremity of the Bukit Peninsula, is considered the most significant of all. It is the only Balinese sea temple that is also one of the nine “directional temples”, positioned around the coast of the island in a way that each one is visible from the next, forming a “chain”. Uluwatu has also one of the most famous surf breaks in the World.

Historically, the town of Ubud, was the main centre of Bali. Its known origins are dated to the eight century A.D. with the arrival of a Javanese Buddhist priest named Rsi Markendya. Despite its remote location in the central foothills amongst rice paddies and steep ravines with small farms, Ubud has maintained its status of a royal town and represents one of the most important cultural and art centers in Bali. In contrast to the main tourist areas surrounding towns of Denpasar and Kuta in southern Bali, the Ubud area has forests, rivers, cooler temperatures and less traffic congestions and therefore focuses primarily on culture, yoga and nature tourism.

According to the Hindu tradition, when a member of a royal family or of an important social standing passes away, he receives a magnificent funeral ceremony with cremation of his mortal remains, followed by several days of religious rituals and celebrations which make up the intricate weave of a religious fabric of this pulsating living culture. Such ceremonies take place only once in several years upon special occasions. When Tjokorda Gde A

gung Suyasa, leader of the Ubud royal family died in the spring of 2008, the local community immediately commenced public celebrations and preparations for the ritual ceremony. The actual ceremony, dedicated not only to the deceased royal leader, but also to few other members of the royal family and about 68 members of the Ubud community took place in middle of July. For this special occasion, Ubud have galvanized about 70 villages for making the decorations, preparing the offerings, producing the two giant effigies of bulls and the three bamboo towers that would be the vehicles for the three deceased royals to the cremation ground. The main tower for the leader’s body was 27metres high and weighed over 11 tones. A total of six thousand people helped carry the tower in rotation. Over 300 women and children carried offerings and lead the procession. After conclusion of the cremation, remaining ashes were brought to boats and then spread over the sea.

Over the 3-day ceremony and celebrations, Ubud was visited by approximately 300,000 local residents and tourists. According to the local press, this was the biggest event of its kind since 1979 and a presented a real view into the living Balinese culture. 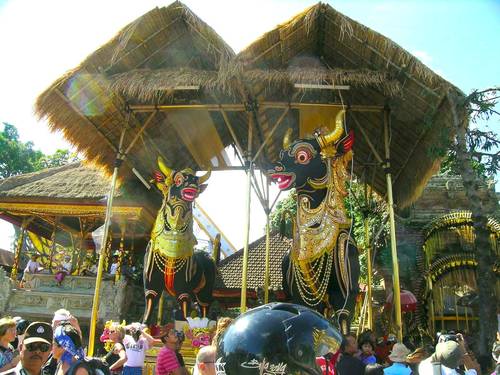