Topkapi Palace is located in town-quarter, in south direction from Galata Bridge and in west direction of Bospor Channel, not far from here there is to be found Sirkeci, railway station. Topkapi is an extended town, which was changed and  transformed in the course of centuries. The sultans built again and again next complexes of buildings, provided it was necessary. The marking „Palace“ is not rather suitable for this construction, as it is a complex of buildings, composed from four main courtyards and many of smaller buildings. On a top of its existence as noble seat, there lived here nearly 4000 persons.

At present, Topkapi is a museum and owns so many of various wealth that the visitors have to return several times, in order to admire all treasuries and valuable works. Neumet II., Turkish besieger of Christian Constantinople, let to build his administrative building here. In 1454, he created from the town, now named as Istanbul, a capital of Ottoman Empire. Originally, Topkapi was an administrative complex (not King´s residential place), serving to government officials. On this place, there was to be found treasury, palace school (as elite school for civil servants), official handicrafts workshops, department stores, stalls and bakeries. Topkapi serial is arranged around greater number of courtyards.

On the first courtyard, there is parking place at present, so guided toour starts from the second courtyard. In a corner of the first palace courtyard, there is located Hagia Eirnene Church, built here just in 4th century. The church is a simple brick-built building, has its appside (it is semicircle of polygonnal space added to main building space), with a cupola, and you find there early mosaics. Hagia Eirnene – this means the Church of Lord´s Peace - is now arranged as a museum and concert hall. On right part of courtyard, there are extended complexes of kitchens, where you can admire extraordinary collection of chinese porcellain (china). From the second courtyard, there is a couple of steps to advisory room (diwan) and harem. On the third courtyard, there are exhibited (in Saint Mantle Pavillon) the relics of Prophet Mohammed. In new treasuries, you can watch marvellous objects, such as Topkapi dagger, with a handle set with precious stones. 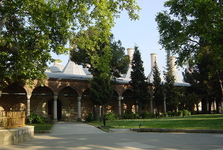 Best view on the whole complex and environs, there is recommended from so called Baghdad kiosk. It was built here as a memory of town-conquest by sultan Murad IV. in 1669. Even in 1540 gave Roxelana, former slave, later wife of sultan Suleiman Magnificent, impulse to a fact, that Topkapi became home of sultan and his women-suite. Anyway, tourists can visit only a part from total number of 300 rooms. Secret doors, corridors, fountains, which are built into walls of rooms (in order to drown a sound of conversations and so, to make impossible eventual listening in), marvellous mosaics, brocade, silk, furniture, and paintings from various styles epochs, all this created luxurious atmosphere blown upon secret. Topkapi is rich on fountains and flowing water, pavillons and parks. All this makes to visitors an impression of paradies on earth. Even diamonds, emeralds or rubies, everywhere celebrated as a speciality, in Topkapi belong to standard of living. 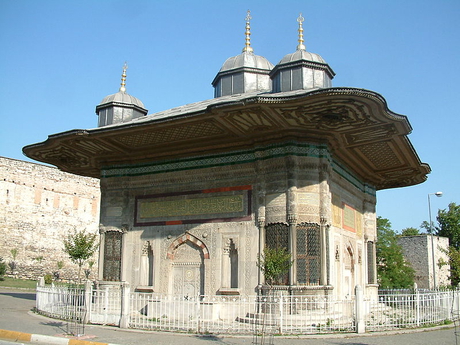