Even Czech Republic contributes to increase of local tourist traffic, owing to rising prices in popular relax centres in Croatia and in Italia. No doubt, you pay more for your trip there, but the costs on spot are less expensive, as in Italy. And fix prices could be negotiated with to cheaper ones. Moreover, local hotels offer popular programme „all inclusive“, so if you do not prefer to spend each evening in other restaurant and have problems with bills, the problem is solved… 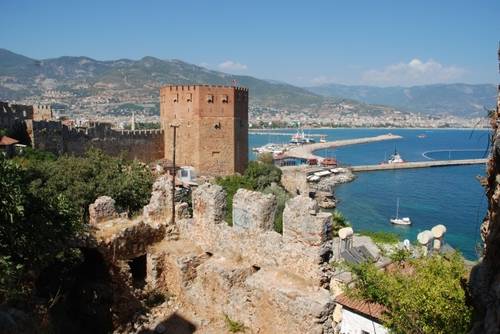 From the town of Antalya, where you arrive probably by airplane, you reach the town of Alanya, 120 kms approx. in eastern direction. It is populare centre of „Turkish Riviera“. Picturesque Alanya is open to seaside and protected by Taurus mountain range from mainland. Its arms are formed with Cleopatra and Keykubat beaches. The areas of Indzhekum, Konakly, Karaburun and Makhmutlar form the other part of this place. Alanya has 250000 inhabitants, but within main saison (April-November) the number of people is twice so high.

The town was founded in time period of 200 B.C. by colonists from Aegean Island. Anyway, its fame got in swing era of antic Roman Empire. At that time, the pirates used it as their main port

and base - the place named Korakesion. A fortress placed also big role here. It was situated on rocky headland over the town. According to an old legend, a pirate´s treasury would be hidden here. There is the other legend which made a fame for this town. It says that Alanya was introduced by Emperor Marcus Aurelius to Cleopatra, Egyptian Queen. She began to use the fortress as a base for building of her navy-flotila. Nevertheless, the town started to be prosperous since 1220, after conquest of Alledin Kejcubat, sultan. At that time, the town got its new name „Alaye“ (it means „noble“). In 1471, the town was a part of Ottoman Empire, with its capital Istanbul, and since this period, Alayna is taken for as a real Turkish town.

Main tourist target is, of course, just mentioned Byzantia fortress, or better to say, its ruin, surrounded with fifty towers, perfectly merging with couple of city-walls. Behind fortification, the visitors find also rests of Byzantian church or a chapel of 11th century, built on bases from Helenic time period, or Mosques. Provided you decide to visit the rests of Seldzkuk Palace, would you prepare two Turkish Liras for a bus, which takes you upstairs on the hill, and further ten Turkish Liras for entrance-ticket. Anyway, if you decide to go upstairs on foot, there is to be offered an alternative pleasant walk, leading from port, passing famous eightsided Red Tower (Kyzyl Kule). Nearby, you can see first and the only brewery of Turkish Riviera - Red Tower Brewery. Its beer makes you fresh, no doubt. It is worth to mention also an unusual view on private bath below the tower. The girls in bikini swim costumes are substituted here by Turkish women. They take sunshine and bath covered in cloth with their traditional scarf around their heads. If you continue mounting, you can enjoy marvellous view around, which differs a little from other ones: the roofs of houses and hotels are beautified by barrels with water, being used for warming by means of solar energy.

Further place of interest: it is Damlatash stalagmite caves. They were discovered by chance(when the stone for local port was mined here) in 1948. The caves became a main target for tourist traffic in Alanya, it became an attractive place for asthma healing. You find here stabil temperature between 22-23 Celsius degrees, and air-moisture makes even 95% inside rocky formations.

Nevertheless, there are not only sightseeings of Turkish Riviera, being attractive for tourists. There are also many activities and events available, offerd by local agencies. There is worth to mention, for instance, off-road drives along Taurus mountain range, or visit of the eight world miracle - Pamukkale (Cotton Castle - it is nature work, established for 15000 years - they are dazzled white travertin cliff terraces with azure blue thermal water).

It were not really Turkish town, when it would not be overcrowded with shops and kiosks offering oriental goods, spices, tea, tobacco, or clothing or fashion accessories. To tell the truth, there are offered mostly imitations of world producers of famous brands, the production of which is not punished in satisfactorily way. Anyway, it is noe surprice… So, you can easily buy here brands , such as Emporio Armani, Dolce and Gabbana, Ed Hardy, Prada, Gucci or Versace. The markets are to be found between tree main points: a square with a statue of Mustafa Kemal Ataturk, first President of Turkish Republic (1881-1938), Red Tower and stalagmite caves. Rest of the town is, however, still under reconstruction. So, you can watch enormous hotel buildings, not finished, waiting for their last arrangements.

If Alanya is attractive for you, do not hesitate and start to look for the adventure. Attention, you have to set your right watch: GMT + 2 h.