Later, new Christian communities sought shelter there before more and more often Arab raids. Today, you can find there more then 1000 churches apart from dwellings in rock. 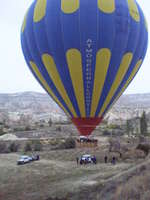 The churches come from the era of early Christianity until the 13th century. In my country, the church dominates the landscape. You can see it instantly. They are, except couple of small openings for windows, doors, or air shafts, hard to be recognized.

I walk about a kilometer by feet around a ranch with horses. They are not only

white stallions after which Cappadocia got its name. I pass by a balloon station, schedule a flight for next day’s morning at five. Great, I cant wait to be there!

I go on until I reach an open-air museum. I go to see one of the churches in the museum. It is called „the temple of light “ after two hanging lamps in the main navy. It is predominantly blue. This color used to be very rare before, yet it is obvious that its creators didn’t spare the color. Wall frescoes depict the life of Jesus Christ . There are also images from the Old Testament such as the great flood, Abraham’s hospitality and so on. 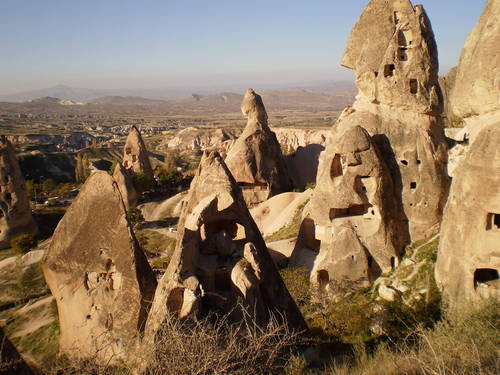 People were not educated then so they couldn’t read the Bible. Frescoes then were like a picture Bible . Only at the bottom part that is easy to reach without a ladder, the figures have their eyes scrapped out. It was done in the 8th century when Christianity tried to purify itself of adhering idols. That’s why people wanted to kill the model. This was achieved by scrapping the eyes out which no later had an effect on viewers. It is true shame to damage paintings like this. God knows how long it took the artists to create them. … 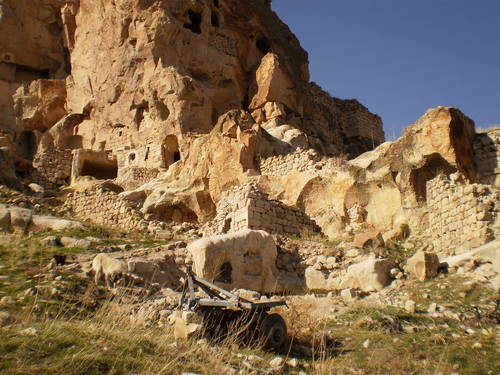