en.infoglobe.cz » US: Grand Canyon National Park – The Goal of Every Tourist

Most commonly people make treks along the southern rim of the canyon. it is amazing there. However, there are other options. You can enjoy the canyon on your own. It is possible to get to canyon's bottom  which consists of the River Colorado. You can either walk there or on water on raft (there are several difficulties available). I f you don't like sports, riding mules can be an interesting for you. Actually, I am not sure if it is more comfortable than simple walk. Another option is to see the canyon up from above. There are tourist helicopters available. 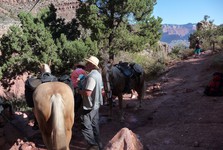 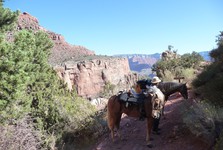 We chose walk. This is intended for skilled tourists only used to difficult conditions because it is difficult. The most common trail (yet not the only one) is Bright Angel Trail winding on canyon's southern rim. It starts in Grand Canyon village 1,3 kilometers above the River Colorado. The elevation is large! You shouldn't take this trail in one day.  It is not recommended. Search parties for people who got in trouble in the canyon are quite common. Don't overestimate yourselves! Dehydratation is the single largest problem - then rains, hypothermia (the river is very cold), and beware of squirrels that love to bite the visitors. It seemed quite strange to us that one shouldn't finish the trail in one day. So we tried it. Our goal was simple - to swim in the River Colorado. 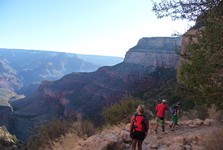 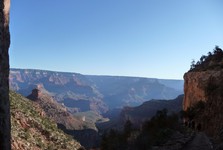 Each of us packed several litres of water. We set off in 8 in the morning. There are several other trails crossing the one we chose. You can choose where to go. Bright Angel Trail crosses Indian Garden. Then it follows the river to the camp and the trail ends at Phantom Ranch. The descent toward the river is 13 kilometers long. On the bottom of the canyon the trail is called River Trail. There are three resting areas (the last at Indian Garden) with drinking water. One even thinks why he bothers taking full backpack of water when he can have some easily along the trail. They say that this water should be filtered or boiled but we drank it and nothing bad happened. 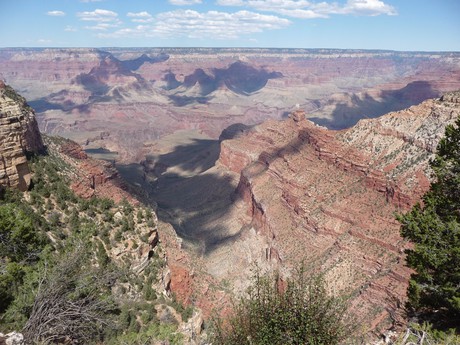 The long descent was not that long timewise. Swimming in the wild river of Colorado was the greatest reward one can hope for. Its color was not nice and you have to swim only near the shore. If you get further, you immediately feel strong water current and sand is not that firm. There is supposed to be a resting area with clean water at the river but we didn't find any because we had to turn around and go uphill. Only then we realized how much we needed drinking water. Our supplies were barealy enough to reach other resting area. So, you should consider to stay over at one of the following camps:Indian Garden or Bright Angel. But they are of low capacity (you have to buy permit at visitors' center in teh village). Going uphill was very difficult and long. But the landscape was really interesting so it was nice compensation for us. We reached the edge of teh crater in six in the evening. 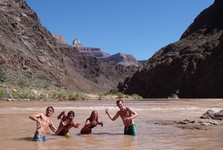 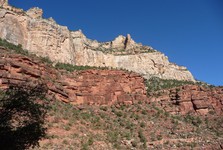 The day was really difficult. But I enjoyed it to the fullest. Some found the last several kilometers strenous. But who can say: "I conquered the Grand Canyon!"