We did a very long passage from Seward to Homer, and still sta 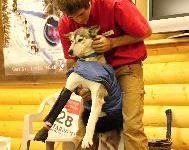 y on the Kenai Peninsula and to our transfer we used Sterling Highway.

Our first stop today is a visit to the mushers (dog handlers). We met members of Seavey´s family who regularly participates in the Iditarod race and after four generations behave and tow trains dogs. This race is the most popular sporting event in Alaska, which has been organizing since 1973. Race is a very difficult ride in extreme conditions. Total length is 1150 m with Katka, we decided to try it on your own dogsled ride. The male part of the group with them joined Dáša, just took a pictures. In the place we were welcomed by one of the mushers - Mike, who told us about the history of the race. Once everything was ready, we got the special trolley on wheels and started our ride. True, the snow missed there quite a bit. In the winter, it must be much more romantic. 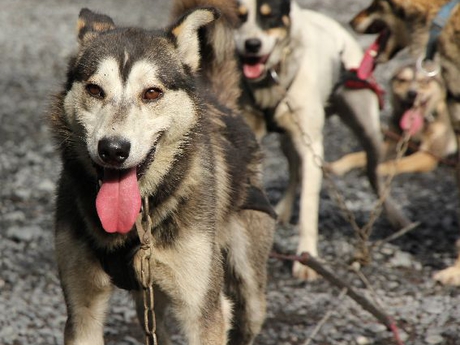 After this experience we are leaving port direction Homer. Homer is the southernmost point of our expedition. We also get to places that are a short walk from the westernmost point of the USA, that can be reached by car. 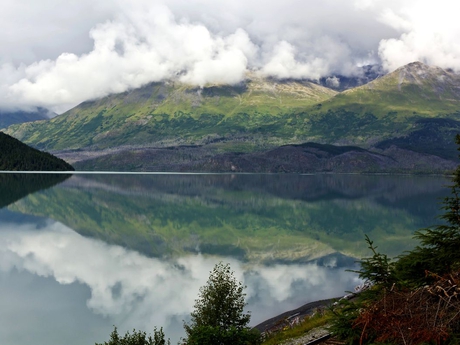 In front of us we have almost 200 km long journey. We go along Kenai Lake, where are the beautiful views, sunshine is changed by rain. We arrive to the town of Ninilchik, where lives less than thousand inhabitants, here is represented a large number of origina

l Russian population. We would like to found and took pictures of bald eagles. At start we are not successful, on wetlands walks the occasional seagull or duck splash around. So we continued on the westernmost tip of the U.S., which is accessible only by car. On the last stop at the sea we have got happiness finally. Among the trees we can see both - bald eagles and brown eagle (golden eagle). They are quite calm, so can take pictures.

We continue to the place of accommodation. Before entering the city, on t

he hill, wonderful view of the glaciers in the Bay Kachemak Bay opened. We arrive at the port of Homer. About accommodation today Czech Lenka takes care, who bought a nice house on a hillside this year that is rented to tourists. We unpack, accommodate and go into town for dinner. Light is fine, so on the way we have time to make a few shots of the bay. We have booked some places in the restaurant of Capitan Patties. It is one of pub that was built to "spit" (Homer Spit). It is a 7 km long continental promontory covered with gravel and sand. Spit was made by sea activities, permanent establishment of the tidal debris created this interesting place. Ness was subsequently reinforced and in it was built road ends here Sterling Highway. Along both sides of the road is a lot of beautiful houses, souvenir shops, restaurants, exhibition halls, you will also find ice rink. Houses stand on high legs to be protected from the waves, real romance…!

Our accommodation is very comfortable. The group leader decides to have a day off. It is necessary to see made photos, eventually sort out the bad ones. Departure has been postponed until 10 am.

to shoot. This area is known due to rife of bald eagle, therefore we focus primarily on this predator. Continue down to the city. Right at the beginning of the Homer Spit a lighthouse shines far away. We look forward to catch bald eagles, therefore after a short break we continue to the port where we were partially successful. After we reach the middle of the foreland, breakup is announced. We have two hours to explore the area, little shopping and lunch. First we go to the bar - Salty Dawn Saloon.

This timbered house was built back in 1897, before there was

Homer marina. At beginning it was used as a post office, railway station, grocery store, until in 1957 became a Salty Dawn Saloon. The construction of the lighthouse was only after 1964 - after the big earthquake that hit Alaska. The pub is one of the most distinct historic buildings in Homer. I'll have just one glass and set off to inspect the harbour. Here the people are warm and happy with you begins to talk about the weather, beautiful nature and the inhabitants of the animal kingdom, which you can see here. The vast majority of souvenirs, which are offered for sale, are handmade. To their production are often used fossilized bones, fin whale or walrus jaws. Beautiful are also different masks made of reindeer skin.

At foreland is always a cluster of cottages and then the free space. You can walk right to the sea, and if the weather was better, you could enjoy a wonderful view of the glaciers in the background with the Gaza Alaska Range, which surround the all bay. In the afternoon, for a while we are solving with what to do, where to go now. We have learned that there are many Russian villages where time has stood still, and the original inhabitants are reported to their traditions. We are going to the Russian village of Voznesensky. The most popular means of transport is a four wheel. They are driven by both men and women, women have even seen more often.

This day was rather relaxing, unfortunately fog didn’t disappear all day, so prospects, that our hotel offered, we did not use at all! 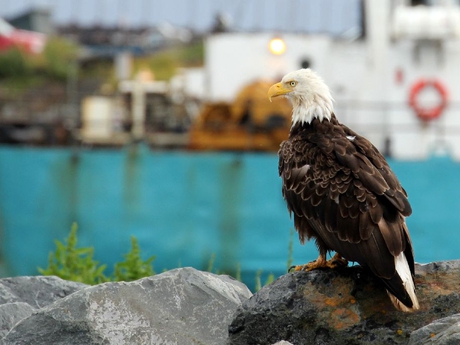 In the next episode we will visit the gold mine - gold diggers paradise and farms of reindeer and muskoxen.