A sunny day wakes us up. Not until now we saw in which type of area we spent a night. First of all we move on Denali Highway to Cantwell. There is beautifully colored tundra all around us. The autumn is a true magician. Red changes to richly orange and somewhere in the center you can see small sky-blue lake sometimes hidden behind some gold colored bush.

Caribous are first animals we see today. They are in distance and the whole herd is moving fast because hunters pursue it. A stop by an outlook at Maclaren Summit (4086 meters above the sea level) follows. It is a second highest lying pass in Alaska. A panorama over the landscape is stunning. 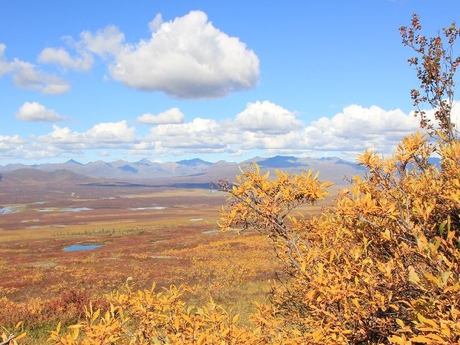 We set out to see other two beautiful outlooks and then we change our course to move back to point of our today departure. We are incredibly lucky since by a road we see a male moose. He boasts with his huge pride, he is sure with is strength. We approach him slowly and try to make some nice pictures. 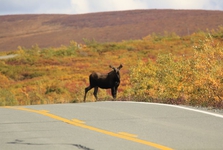 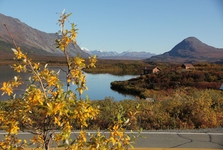 Our journey continues in a similar manner. We reach other amazing outlooks; we make pictures of mirror reflection on the lake, we “hunt” eagles in tree branches and we tried to capture as accurate images as possible. It happened few times we were stuck in a traffic jam that profoundly prolong our journey. We have a dinner in the Cooper River Princess – Wilderness Lodge hotel. It is a very pleasant place with a great cuisine. Dinner is amazing, but times goes so fast! It is already 7pm and we have still 100 miles of a difficult drive ahead of us. Literally. I mean every word of it. 40 miles goes on a classic state road and then we get on the worst road in Alaska. On that road we have to drive another 60 miles. 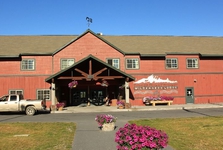 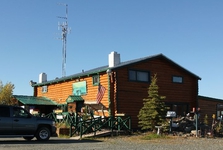 The McCarthy Road leads through a wilderness and the road is not firmed and is very dusty. Often very narrow it passes the river on the bridge where is impossible for two cars to pass it in the same time. We get on the road when it is already dark and it made a very dark impression on us. There are no road signs, sometimes there is a swift curve, and sometimes the road leads above some chasm and is very narrow. We hurry; our driver drives nimbly and doesn’t worry about a danger of flat tyre that is imminent. Our tour guide strongly insists on him to slow the tempo of his drive to 35 miles at the most (maximum speed here). The second car has to keep distance. The road is so dusty that clouds of dust make some kind of non-transparent fog. Our eyes are tired and Dasha tries to calm us down. We have no idea how long we have to travel. 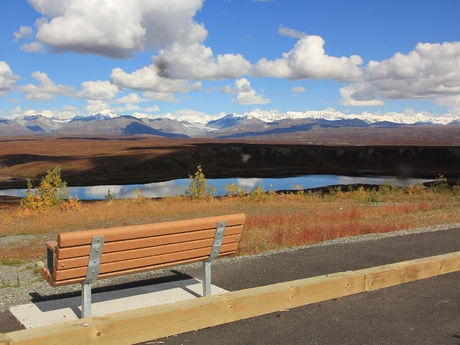 Finally we see slightly illuminated area in the distance. The McCarthy Road ends by the Kennicott River so it doesn’t get you to McCarthy settlement.  The bridge there is only for pedestrians and you have to walk another mile from the bridge. We have to load our baggage on iron carts that are for this kind of purpose placed by the bridge. In winter supplies to McCarthy come by the frozen river, because there is no other way how to get there. We wait for our ride. Few minutes later the owner arrives with his coach, we load our baggage and we moved off. Ma Johnson´s hotel is ready to give us an asylum

Morning we set out to see the most profitable copper mine in Alaska - Kennecott.