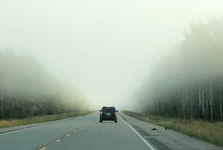 We leave guest house White Moose, Haley, and we continue to Fairbanks. Countryside is covered with mist, we pass through forest and the road seems to disappear... The road to "nowhere". Magical surroundings reminds us scene from some typical horror movie.

The first stop - town Nenana. It is a small town with a large portion of indigenous people of Athabask nation - Eskimos. In the beginning of the 20th century the town was used as a railroad-building base camp. This period of time is reminded in local Alaska State Railroad Musem – Nenana Depot. 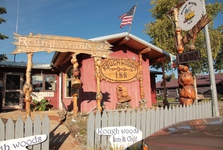 The town has a very nice small church and many interesting houses built of wood. We have quickly decided to use our pause here to stop by for coffee and/or some snack. Right across the road is absolutely fabulous restaurant Rough Woods Inn, which is opened during the whole year. There is a reason we mentioned its opening time, since it is not usual in Alaska for some business to be opened whole year. Most of restaurants work only during spring and summer. Another specialty is espresso (not a common part of menu). Our breakfast was only warm meal of the day. 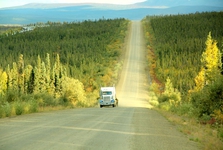 We arrived in Fairbanks where we just refill our gasoline reserves and buy food for a whole day, because there is a long road ahead. We continue by Steese Highway and close to Fox town we turn on Elliott Highway. Elliot Highway goes along mountainside and ranges and offers amazing views over the countryside. The highway starts 11 miles from Fairbanks,  first 73 miles to intersection with Dalton Higway are paved. All of us long to see mighty and beautiful Yukon river. We leave Elliott Highway and continue on a really difficult Dalton Highway. It is long, bumpy, and very dusty. Margins are not paved and the road is graveled. It was built as a access road for building northern passage Trans-Alaska Pipeline. The road is 414 miles long and it goes from the intersection with Elliot Highway to Arctic Ocean. The last town on the road is Deadhorse. It has very heavytraffic- dozens and dozens trucks are whizzing in both directions and because of dust we sometimes can't see in curves. You need to be well-prepared for the trip. First of all you need to fill your gasoline tanks, because number of gas stations is very low. Second, you need spare parts for your car, tow rope, bulbs, spare tires etc. Third, sufficient amount of food and drink and if your crew consists of only one car, it is suitable to have also some blanket or a sleeping bag. In case of flat tire you must be self-sufficient. Call for help is very problematic, or rather impossible. 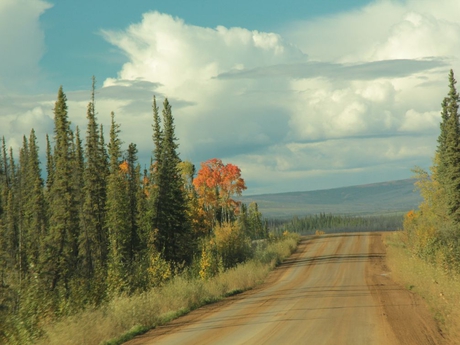 The countryside along the road is beautiful. Woods are followed by high mountais, and crystal clear rivers. It is the end of August and autumn with its myriads of colors begins in Alaska. Leaves of trees are colored in yellow gold and following tundra is colored in crimson red. On 56t 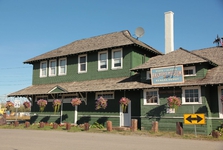 h mile  Dalton Highway reaches Yukon River. You can get across the river thanks to   2290 feet long Yukon River Bridge. If you want to know more about the area, try to visit Yukon Crossing Visitor Contact Station. It's around 16 o'clock and we have yet 60 miles to Arctic Circle and then back to Fairbanks. For a while we ponder to give up our trip. We refill gas, fluids and eat some small snack. Only few souvenirs and quickly back into the car. Originally sunny weather is spoiling! Clouds appear and there are even few drops of rain. Part of the countryside is brightened by a sunlight and together with a small rain it creates a beautiful rainbow! We stop 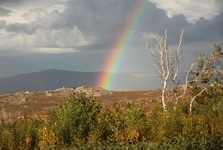 and take a picture of this amazing wonder of nature.Finally, we are just at 66° 33´N, through here the Arctic Circle passes. In the time of summer solstice sun doesn't set for one day and in the time of winter solstice sun doesn't dawn and the area is entirely sinking in the dark. There is a small turning off the road, a "rest area" lets say. An exact place where Dalton Highway crosses the Arctic Circle is marked with a wooden marking. It's late and we have a tiring road back. 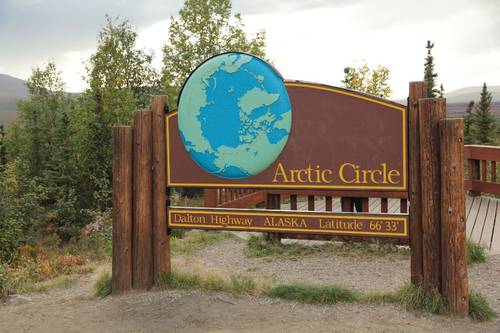 We drive on the same route simply because there is no other. However, it doesn't mean there is nothing to look at. Nature is amazing. When we finally arrived in Fairbanks it's late evening. In Birdgewater hotel we crash around midnight. We are all exhausted and fall right on our beds.

Following day we set out to thermal springs and we will also visit North Pole town - the residence of Santa Claus.