Well, here we are in a small village McCarthy. We were brouth here by the “worst road on the world.” Once there was a railroad on which was copper ore delivered to the sea. We are accommodated in the center of the largest National Park Wrangell - St. Elias in Kennicott. In McCarthy life stopped about 70 years ago as in the world’s second largest copper mine. We are enjoying hospitality at old Ma Johnson Hotel. Everyone who wants to have experience with an atmosphere full of adventure, to move back decades in time and dream his/her dream of true wilderness, shouldn’t miss this hotel. Every room is unique. Walls are covered with interesting artifact from McCarthy or Kennicott.

The village or a little town, if you prefer, has around 40 inhabitants living here during a whole year, however the touristic season is significantly shorter and begins in Spring (in May) - depends on weather – and ends on September 5th. Part-time employees then have to find job in other region. In winter supplies come on a frozen river.

Right after a breakfast we were preparing for a minibus ride. We were going to see the most profitable Alaskan mine - Kennecott . The bus ride takes around 40 minutes or you can walk there. Or you can take a walk. There is a preserved mining town with its historic buildings. We begin our visit at Visitor Center where we watch a documentary movie focused on fame of this copper mine. Copper was discovered here in 1900. 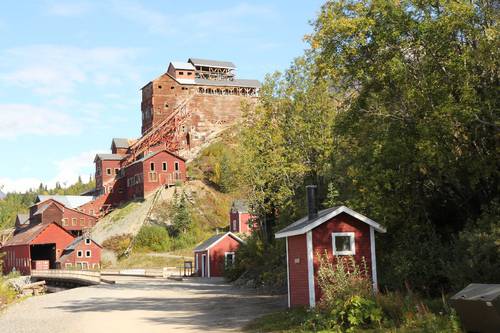 After huge copper reserves were discovered, there also immediately emerged a significant obstacle for its mining – how to deliver copper ore from  Kennicott to Cordova town lying by the sea. From there down to Tacomy (state of Washington) where the furnaces were, copper was should have been delivered to be processed. Michael J. Heney, a specialist on railroad construction, was asked to watch over its construction. The construction of railroad began in 1908 in Cordova, took three years and when it reached Cordova it was 196 miles long. During its operational years there was transpored copper worth of 200 million dollars. Near mines had been emerging Kennicott town.

Copper mines were closed in November 1938 in the time when prices of copper radically fell. The last train took away the rest of locals. Few years later, in 1941, a mining company gave the whole Copper River Northwestern Railway to the Federal government to use it for a construction of a speedway. It was a gift to all Alaskans. McCarthy and a part of Kennicott are now in a private ownership. 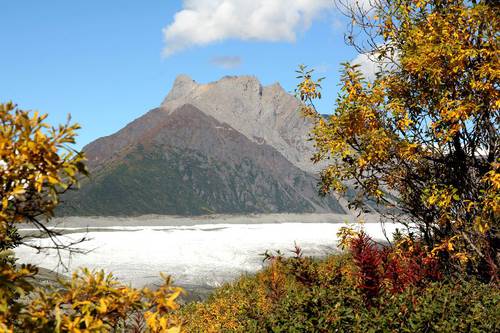 The weather is absolutely amazing. Sun almost burns. First we closely examined the whole copper mine and then we continue along Kennicott glaciers a Root Glaciers. The road is 1,5 mile long and we learn from our guide that American black bear is common here. Many info boards also warn us about him, where are useful information how behave in this area and what to do if spotted a bear. We almost reached the end of our track that now continues right to a glacier. The surface is very slippery and it is dangerous. I better prefer the same path as our two colleagues, turn back and finally take some nice pictures of whole track.

Thanks to a pleasant weather our program changes. Newly we were about to experience a scenic flight with Cessna. Mountain Tour will present us thirteen most important glaciers in the area. We will fly through six valleys lining rocky formations and we will see two most important mountains. On southeast we will see ruins of the Nizina Bridge built in 1920 and a huge massif Sourdough Rock Glacier. Unimaginable! To see this beauty from above is something you will never forget! Even in the evening when I close my eyes I see the whole flight again.

After waking up we hit the road again. We will see for example once known and important Chitina train station or a narrow canyon with waterfalls streaming from its sides. And our path will be crossed by American black bear.