An important historical attraction is on 28th mile. North from the road you can see ruins of old wooden bridge that used to be a railroad bridge. The main attraction of the road is unquestionably Kuskulana River Bridge – most a bridge across the Kuskulana River on 17th mile. It was built in 1911 and it is 238 feet above the river. In 1988 the bridge was rebuilt and wood was replaced with iron! 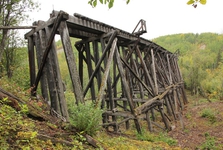 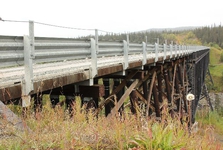 We approach Chitina village that is on the 34th mile, on the west bank of Copper River. There live around 100 people, mostly Russian speaking. Chitina is very well-known as an important train station during the golden days of CR &NW(translated as - Can´t Run & Never Will). We approach Valdes, cross narrow Keystone Canyon. It steep slopes are every moment covered with some waterfall. We

stop by one of them. The name for the falls is Horsetail Falls and then we continue right to the city!

We arrived in the harbor and we see a lot of otters wildly feeding on salmons, barely noticing we are taking photos of them. We return along the coast back. Dáša said that it is likely to see a bear. So I am gazing all around to catch a sight of some movement or anything else that looks like a bear. We are observing our surroundings but we haven’t seen anything. However, after we jump into our cars I see something

right across the street. I scream and show to Dáša what I have found. Hurray! Dáša confirms that it is an American black bear. We hurry out from the car and take our cameras. Our object is forthcoming and it slowly moves towards us. Sometimes it stops on grass and sit on its hind legs. Just few more steps and the bear is only few meters away from us. The bear slowly gets on the road and carefully crosses it. Luckily, collision with some vehicle is not imminent because there is no car miles away. We enjoyed the moment and document it. We got back to our car and leave the port behind us. We headed to Downtown Inn where is our accommodation this day.

An encounter with a bear yesterday was very impressive. We got up relative early and right after 8 o’clock in the morning we returned to the place we were in yesterday evening and had so great success. Unfortunately, the weather is not good. We barely see one step ahead of us. The mist is “lolling around” above the ground and an American black bear we spotted on the other side of the road looks as it is behind a curtain. We continue along the bay to its end where we are again are not really aware what is happening ahead of us. There is still a low tide, the sea is full of glossy fish and sea gulls feed on them. Myriads of fish can sea gulls in no way eat all. A fish smell here is really strong.

Finally, beams of sunlight get through clouds and we return to our initial point where “our” beautiful bear continues in its feast. The bear has a beautiful black fur decorated with white breast in a shape of a heart. The bear poses for us and a green color of grass makes a sharp contrast on pictures. We again return to a bay where tide slowly rises. Suddenly seals appear and even a sea lion.

Port Valdez - currently it is actually two cities. One was here long ago, however, on Good Friday in 1964 it almost perished, because of a strong earthquake. A tsunami destroyed almost everything. The second city was built after this near-catastrophe. A development of new Valdez is predominantly connected to oil. In the 1970s the Trans-Alaska Pipeline came here. It made the city develop and today here live 4500 people. The oil industry has its dark side, however. In 1989 there was a large ecological disaster. Exxon Valdez was an original name of a tank ship of a petrochemical company that wrecked on March 24, 1989, at the Prince William Bay near Alaskan coast. At that time a tank ship was full loaded with oil and the wreckage caused 40 thousand tons of oil to spill. It is one of the greatest ecological disasters yet. 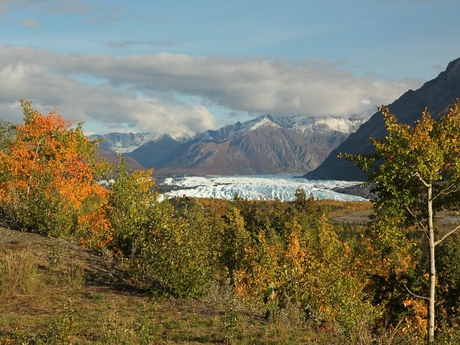 Today we have ahead of us almost 500 kilometers long journey. To Anchorage we return across Mantusha-Susitna borough, or also known as Mat-Su. Our track is because of many curves and hilly terrain one of the most picturesque roads in Alaska. East from Anchorage lies Matanuska Glacier, the only glacier that you can reach by your car.

Anchorage welcomes us. We returned here and we will stay here on last days of our stay. We can’t wait because tomorrow is the D-day. We will visit Katmai island, where we will, hopefully, have a chance to see some predators – Grizzly bears are here like at home. So, we just prepare our cameras and get some sleep!