We wake up already at 5 am, at 7,30 take off from Anchorage to King Salmon. From the airport we go by the bus to the Naknek River where is the Katmai Air Floatplane Office, the place from which we will take off to Katmai. Around 11,30 we are finally call on to board the plane. We are about to experience a 20 minutes long sightseeing flight (about 35 miles) between Salmon and Brooks Lodge. The weather is not perfect; we feel heavy wind blows in our seaplane. Finally, we land on Naknek Lake, the center of the Katmai National Park. In 1950 there was built a fishing camp – Brooks Camp that later became world famous. The Katmai National Park is situated on the Alaska Peninsula around 290 miles southwest from Anchorage. All islands that are no more than 5 miles away from the park are also its components. The whole area boasts with the world’s largest population of protected species of the brown bear (grizzly).

Right after our landing we headed to a visitor center to hear important instructions that we need stick to on the whole area. First of all, a ranger speaks about 20 minutes and then a video of instruction follows. An important recommendation applies to a bridge across the Lower River. Later we realize critical importance of information we got… A wooden bridge connects both banks of the Lower River. We have to cross the bridge so we can get to an outlook from which we can see bears in the river and its vicinity. From the other bank we can also continue to the Brooks Falls. The bridge has small wooden doors with electrical locks on both ends. Tourists are allowed to enter it only in the time when it is safe for them. If there are too many bears in the bridge’s vicinity, the entrance is forbidden. It can be closed for 10 minutes, one hour or more. Security guards don’t limit movement of bears, so if grizzly decides he likes to be in front of the gate on the bridge, he just lies down there and rests. Nobody tries to kick him out of there. On both riversides are rangers who keep informing each other with walkie-talkies about current situation. 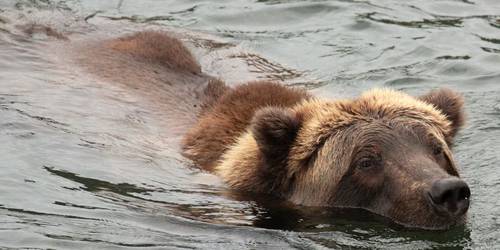 So we know everything. Well, at least we think that. Our instructor confirms that with a decorated pin he gives to every one. Every one has to put the pin visibly on his clothes. Finally, on our way through the forest we see a small dot moving far away from us. Soon we see it is what we were promised to see. It doesn’t take long and number of bears is quickly growing. Bears are on our right, left, sometimes one, sometimes four at once… It is a heaven for our cameras. Those dots we were so grateful are eventually beautiful pictures and telephoto lens we use are sometimes unsuitable because bears are so close they simply don’t fit into the shot. We shoot details of ears, fur, and paws. We take pictures around an hour and then we decide to continue to Brooks Falls. When we reach the place we see that under a weir is hidden one phlegmatic bear. He just sits in a river and “shower” himself without doing any unnecessary moves. Our trip to the falls was worth it. After a while we see few bears in different distances. Few were moving in a water, some that were close to us under an “outlook”.

We return to the bridge across the Lower River and we are lucky there! Bears are everywhere. It is interesting to watch their differently colored fur. Dark brown bears, light brown bears… Some have very dark fur but very light ears. Their name is devoted deduced from their long hairs with silver spires. Grizzly is a subspecies of the brown bear. Grizzly grows up to 2 meters and weights up to 300 kg. Even huger subspecies is the Kodiak bear that occurs on south coast of Alaska. The time runs and suddenly we had to move to the other bank. But the bridge was closed. Bears were all around us and they didn’t look like they are leaving. It seemed they sensed we have to go back. At the beginning it is a fun, but when this fun takes 45 minutes it becomes a problem. Our seaplane is ready to leave but we still haven’t reached the other side…

When the situation seems very hopeful, the ranger gets an information that in our vicinity is a female bear that looks nervous and could be potentially dangerous. So we will choose our plan B – a motorboat will come for us and take as across a dangerous land. The boat has only five seats so we have to split. I go with the first group. We have to avoid a dangerous area where aer bears in the water, so we go around spit of land. When the boat reaches the largest distance from the shore its engine suddenly stops working. A nice man tries to repair it, however, his effort comes in vain. Our captain calls for help with his radio. A kayak with oars gets to our boat. We attach oars to the boat and continue manually. A smiling young man tells us that everything is OK and that we should enjoy the nature! We have only cameras with us in the boat. Bears are in the water about 20 meters from us and I think they even don’t notice us. When Not until I am in hotel and watch through pictures I realize that they actually noticed us. Luckily, their attention was focused more on salmons than on us.

We are on the shore, get off the boat and our guides together with rangers are thinking what to do next. There is not another motorboat and the situation around the bridge isn’t better, but still it is necessary to cross the bridge. Ranger chooses around 10 persons and with weapons rangers

help them to cross a dangerous land. We are back together, get on our seaplane and get back to King Salmon. With many impressions and experiences and thousands of photos we arrive in Anchorage at 9pm. Well, our trip wasn’t bad at all!

I am tired and excited. So when I get to my room I fall righ into the bed. Next day we will finally get some sleep! Our photoexpedition is slowly getting to its end, however, we haven’t seen Earhquake Park yet. It emerged on a place of one of the greatest natural disasters.