60 years in operation Disneyland is still highly popular. Dozens of characters from Disney’s workshops come alive here. It creates the impression of the park being focused solely on children. However, it is not entirely true.

To ensure return of his investment, Disney had to create a park that would be more universal. Had it been focused on kids grown-ups would be bored here soon. His project might have seen fast end of its ambition then. Therefore, the park was build that even adults would like it here. 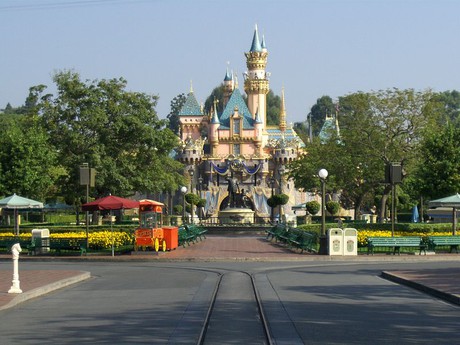 Disneyland had been expanding. On its 50th anniversary the park underwent renovation and opened new attractions.

So what can you see here? The central place of the whole park is Main Street U.S.A.. It 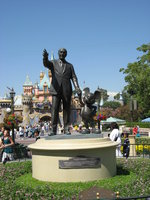 is a stereotypical representation of a typical small town of the Midwest. The iconic castle which stands at the other end of the Main Street was inspired by Bavarian Neuschwanstein . 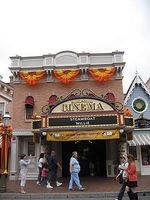 A 18-meter Christmas tree is set up every Christmas on Main Street. A bronze statue of Walt Disney and Mickey Mouse called the Partners stands in front of the castle. Around the statue there are bronze statues of other famous characters.

Rails go along the entire street. A small steam locomotive cruises along them. The visitors can take a ride to other sections of the park or just ride around the entire compound.

Also you can visit a small cinema where they screen old short Disney movies including Steam Boat Willie (1928) which was the very first cartoon with sound.