Caodaism is a religion which fascinates many people. According to the caodaic myth Tao was here before the creation and God. It is shapeless, static, eternal source. Then the Big Bang happened and it created God. God then created two energies which complete one another - yin and yang. In their presence, the universe materialized. Here, God's symbol is the famous the Eye of Providence (the left one as he is the lord of yang which is on the left). Caodaists believe there are 36 heavenly spheres and 72 planets where life exists. The 72nd planet is the closest to the hell. The Earth is number 68. 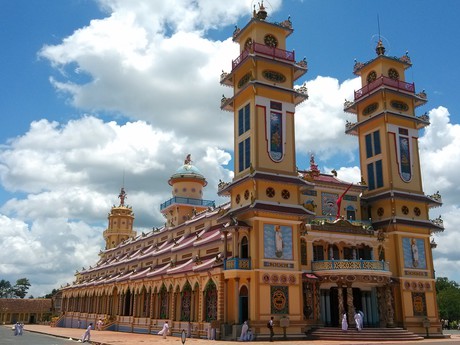 We happened to visit the temple in Tây Ninh (the largest Caodaist temple) when a sermon was about to start. Priests in blue, yellow and red robes were entering the temple. Believers were all dressed in white. All take off their shoes in front of the entrance. Men enter through the entrance on the righ. Women through to one on the left. They gather in the main hall and on the balconies. 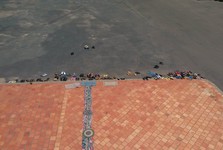 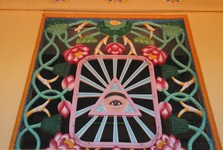 The temple gets interesting right at the moment you enter. There is a painting depicting three persons - the Chinese revolutionary Sun Yat-sen, the Vietnamese poet Nguyễn Bỉnh Khiêm, and the French writer Victor Hugo. It says "love and justice." These are the three saints who sign the contract among God and the mankind. The Caodaistic pantheon is more than interesting and colorful - there is Jesus Christ, Prophet Mohammad, Julius Caesar, Joan of Arc, William Shakespeare, Winston Churchill, Chinese poet Li Po or Vladimir Iliyich Lenin. The temple combines many architectural styles form all around the world. And it is painted in many colors. It's characteristic section is a huge blue sphere with stars scattered on its surface. The chruch's main symbol the Eye of Providence is displayed on it. Below, there is the seat of the Caodaistic pope. However, it has been empty for 80 years. 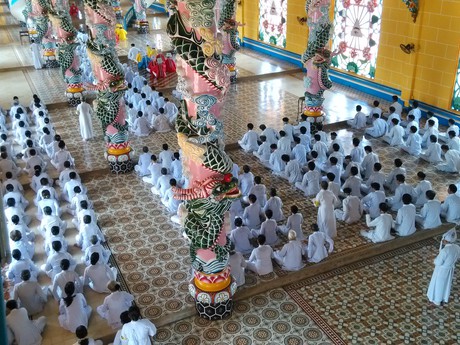 The sermon was pretty long. Yet it was perfectly organized. Music played in the background. Everything was unreal and almost magical.

Once the sermon was finished, we set off to see the surrounding area. The sun burned. We couldn't resist to take a break in the shade. Men in white robes offered us kindly a lunch worth of food. Caodists are vegetarians, by the way. We gladly accepted their offer. They didn't want any money. Moreover, we had great fun with them and they waved at us once we were leaving. However is the Cadoist myth crazy, there is perhaps some grain of truth in it…