We are waiting one more day in the metropolis before heading north to Lao Cai and Sapa village. In the morning we will sleep longer and then go for a taxi. We are smarter and we have only small banknotes in our wallet. At the reception we will learn the estimated cost of transportation. And one more thing we got thanks to a willing staff, a local sim card. If you stay in the country and expect to use the Internet, I advise you to buy a local sim card as soon as possible. Prices are very low and the effect is excellent. In case of intensive use of the phone, I usually have a card for about CZK 500, the less active callers will do with 300 CZK. 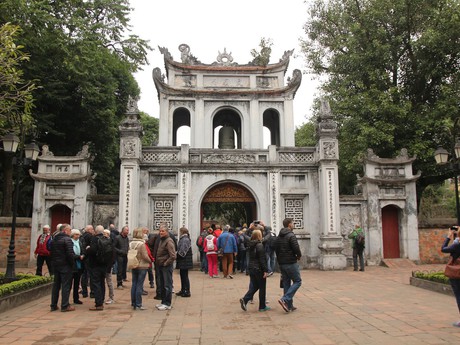 The weather is ideal today and we head to the Temple of Literature - Van Mieu. The most courageous of you can try xe om aka a motorized taxi. Xe om in translation means

hugging. So you catch the motorbike and with the driver he will take you to the destination. When I first sat on a motorcycle in Hanoi, my driver told me, that I can't worry otherwise we will fall. This will tell you. Motorbikes swing one next to each other, sometimes even in the opposite direction. Some carry one passenger, others even 4, some are loads more than the bike itself, but all are in motion. Until today I can not understand how girls on motorbikes can sit in tight skirts and have high heel boots on their feet. My friends like to say that what the Vietnamese is doing on a motorbike, we would not fit into the car.

The Temple of Literature has until recently been the only quiet island in the Hanoi Sea motorcycle. It is the campus of the very first university in the country. The entire compound is surrounded by a high wall that hides it from the noise in the surrounding streets from getting in. The temple was dedicated to the prominent Chinese philosopher Confucius. It was established in the 11th century, even though the exact date of its origin is still questionable. There are several courtyards, pagodas, shrines, and a large number of stone steles. In the past, the names of successful students who have passed the final examinations were written there.

The whole area is widely visited by both tourists and locals. Students often go here before doing exams and, of course, after graduation. On such ocassions boys and girls invite friends or family and go to the temple to pay their respects. 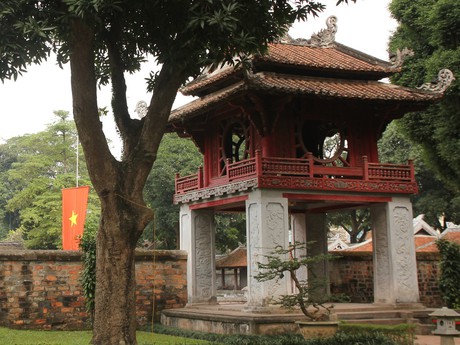 Van Mieu is really large, you have to spend at least two hours on the tour, you will not regret it. Just at the time of the New Year celebrations be sure to reconsider your intention to visit this places for it may be really busy. 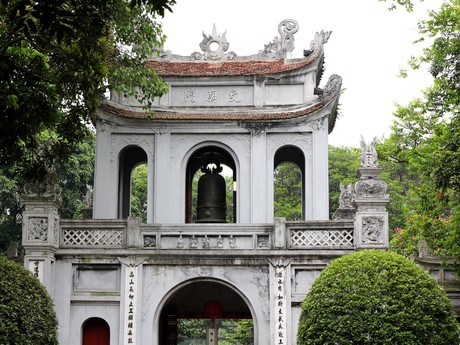 I think we've visited some of the most interesting places in Hanoi together. Just repeat what you should not miss out on: Hoan Kiem Lake, The Lake of the Returned Sword, Nephrite Mountain Temple, Chua Tran Quoc which is the oldest pagoda by the Western Lake, the One Pillar pagoda at Ba Dinh Square, and the Van Mieu Literature Temple. You can buy at Dong Xuang Market. Last but not least, it is a duty stop in Bia Hoi corner - a famous place in the Old Quarter, where you can certainly enjoy and taste the draft beer for the price of a few cents.
We are now about to return to the hotel and move north by night train. We will tell you about this part of our journey next time.