Hoi An‘s glory days were between the 16th and 19th centuries. Hoi An was an important international port. Merchants from all around Asia and also Europe, from Portugal and Italy especially. Many Japanese and Chinese settled here permanently. There are still visible traces of their presence in some districts they founded. Also, Christian missionaries, for instance Alexandre de Rhodes, a French Jesuit also came here. De Rhodes spread Christianity in Vietnam and transliterated Vietnamese scripture to Latin. 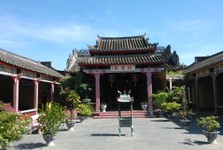 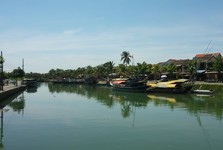 The port due to sediments in river’s mouth gradually became unsuitable for sea ships. Danang (Đà Nẵng), a city nearby took Hoi An’s role over. Hoi An, however, was spared of heavy fights storming across the country during the Indochina wars of the 20th century. In 1999, it became a UNESCO World Heritage site. 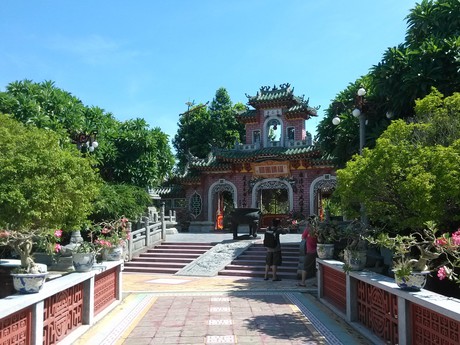 It was still quite quiet in the morning. Without hustle we observed architecture which combines different influences from Chinese to Portuguese. The most opulent houses belonged to merchants and their descendants still live in them. We even talked to one such a men who is a descendant to an important merchant family. The old men was sitting on his porch making an order to many banknotes tourists gave to him. We even spotted a Czech 50 crown banknote. After an enthusiastic discussion on the Czech Republic we walked through the rest of the house. Especially we loved traditional motifs carved into wood or preserved items of daily live of his ancestors. 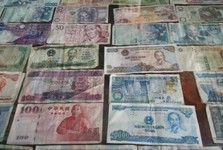 Another important sights include the 16th century roofed Japanese bridge on which a pagoda stands. Then there are assembly and ceremonial halls built by Chinese merchants. Majority of them is built from wood. Chua Cau bridge (Chùa Cầu) is one of city’s symbols as it combines Japanese and Chinese districts. Apart from a Buddhist pagoda there are the so called patrons guardings each of its two ends. One of them is a dog the other a monkey. The bridge is a popular tourist attraction. Everyday painters try to capture it on canvas. 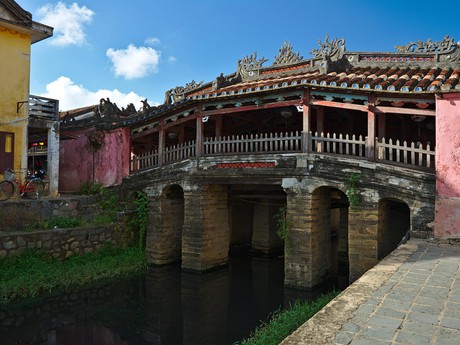 Small shops and stands add to city’s atmosphere. You can buy there all kind of delicacies, souvenirs like cloths, bowls and other things included.

It was just about time when we finished our Hoi An sightseeing as we managed to escape tourist crowds. They, fortunately, slept bit longer on that day so we missed them eventually. We continued on in our journey. Where to is the matter of the next week’s article.