en.infoglobe.cz » Vietnam, Hoi An: Splendid City in the Rain

However, not a Chinese woman sat in the bus. I would understand what he said at least. But there was a Vietnamese looking like she wants to borrow a fan. Later she would want to return it back. B go involved and settled our dispute. This was a moment when I stopped liking Vietnam. I felt much better once I bought a Vietnamese baguette. Well, a Vietnamese baguette is no official term. It is a fabulous, crispy baguette (especially those who haven’t eaten good bakery products for like a year) which comes with all possible tastes. I preferred with fried eggs and vegetables. B enjoyed a baguette with meat and spices. It cost only about 10 crowns which makes it even tastier. 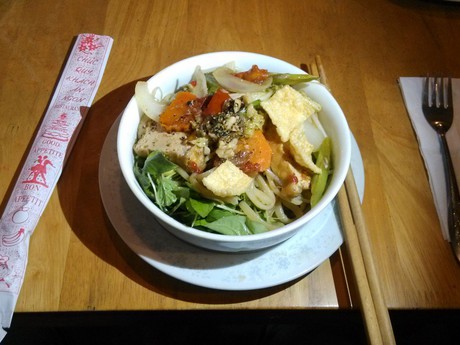 Once we got settled in our accommodation we set off for exploring the sights in the city. Well, that was the plan at least. However, the weather changed. When we arrived it was boiling hot. But once we left our hostel classic Vietnamese downpour started. We bought some raincoats in a stand closest to us. In this awful appearance we went on. Before romantic city of Hoi An was not romantic any more. 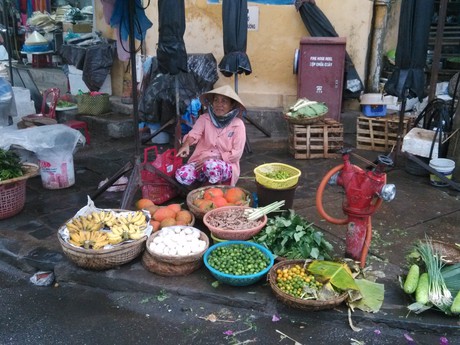 Despite annoying rain Hoi An is a picturesque place. Once it was an important center of trade to southeast Asia Merchants from China, Japan or India traveled here, and merchants from European lands as well. The rise of Danang (Đà Nẵng) made Hoi An of less importance. I felt that there is nostalgia for good old times while I was walking down Hoi An’s old streets. 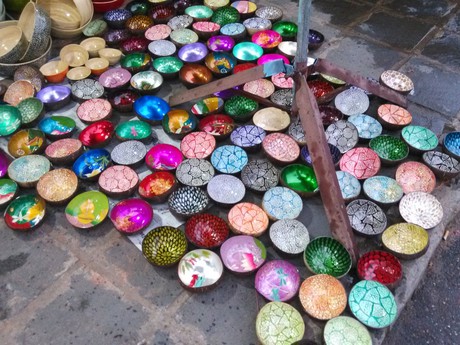 Hoi An’s central district is small so you just can walk through it. More than eight hundreds buildings are really well preserved according to UNESCO’s assessment. We paid for a part of the renovation because we had bought tickets when we had arrived at the entrance of the city center. However, it was evening already so many buildings had been already closed. Still there was much to see. Even constant rain didn’t repel vendors selling souvenirs or other stuff. To us the most beautiful stand were those along the river with lampions hanging on them. 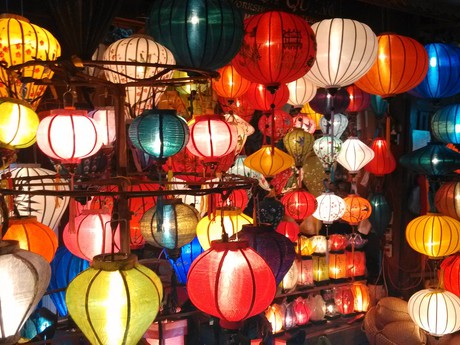 It was raining all the time. So we decided to continue on the following day and hope for a better weather. We bought us chè, a desert with coconut milk (and many other unidentifiable yet delicious ingredients). Then we set off to our hostel.

Our patience paid off. The next day in the morning was hot and sunny. Hoi An and all its landmarks was waiting for us.