The tombs belong to emperors of the Nguyen dynasty (1802–1945) which was the last one. They lay nearby the imperial city making it very popular sight. First we visited Tự Đức’s tomb. It resembled a park rather. Emperor Tự Đức loved to spent time over here. The whole compound was built while he was still alive. The day we were there we walked along the lake, enjoyed the view of blossoming magnolias. We walked through various pavilions intended for religious and laymen events. Very pompous emperor’s tomb stands next to abandoned tombs of emperor’s concubines. He chose from more than hundred women, allegedly. 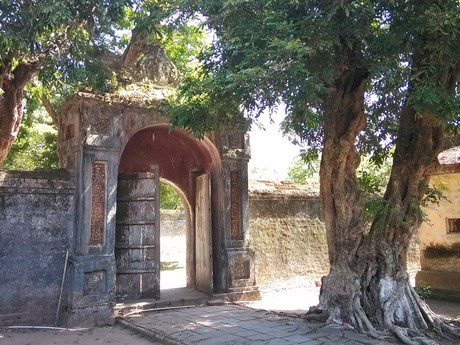 We didn’t have to worry that we would get stuck somewhere thanks to our bike. The road goes to Emperor Gia Long’s tomb which is bit further away. The road was adventurous. The roads we were riding were not paved. The went among the fields occupied with water buffaloes. We even crossed a floating bridge. The tomb, however, is closed to tourists. Thus, it was very quiet around it. The guard was willing to let us in for a hefty fee. However, we just walked up the hill and then we saw the tomb wonderfully. 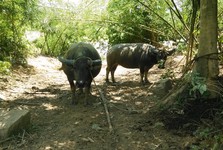 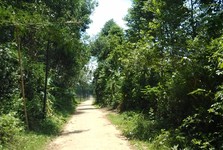 On our way to the last tomb we were riding through many villages. One village had a large aroma stick production. I was absolutely amazed about it. Stick were spread out along the road. Emperor Khải Định’s tomb was amazing as well. It is also one of the most interesting. Its architecture make it a lot different from other tombs. Traditional Vietnamese architecture and European influences are combined here. It stands on a hill. Sculptures of elephants, horses and officials stand along the road to the tomb. The highest point of the tomb is decorated with colorful mosaic made of china shards. It looks really majestic. 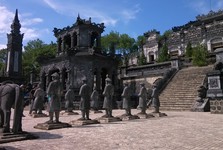 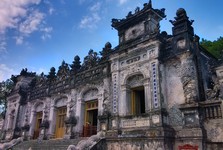 When you decide to visit any tomb don’t expect to be disappointed. There is much more than tombs. You can see Vietnamese landscape, or stroke a water buffalo calf..

Hue has a lot to offer. Time to leave came neigh. However, we made one more trip to the surroundings. But we tell you about it next week.