I have longed to see Sa Pa for a long time. And because we were already in Hanoi, the country’s capital, it was really easy to just hop on the train and travel to famous Sa Pa.

We don’t know much about the natives there. They were replaced by what are minorities today in Vietnam. The most well-known is the Hmong minority (Người H'Mông in Vietnamese) and the Dao minority (Người Dao in Vietnamese). Towards the end of the 19th and 20th century, the French started to settle in the area. The architecture around here proofs this claim. The French believed, Sa Pa has a great potential thanks to its beauty and nature and great potential lies there. Sanatoriums were established for that reason. 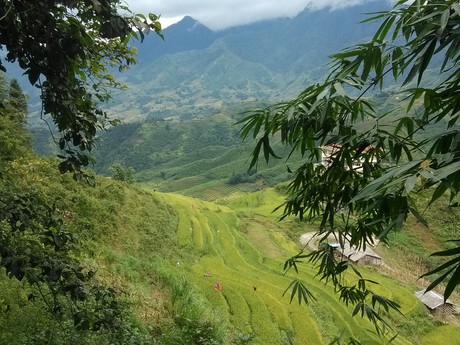 Average high level of Sa Pa is 1 600 meters. We quickly felt that. Once you get at the train station you need to travel by bus and it is a ride of considerable length. Drivers who ride on serpentines try stomachs of the tourists. Thus, we gratefully get off the bus in square in front of the 1930-chuch (built by the French obviously). 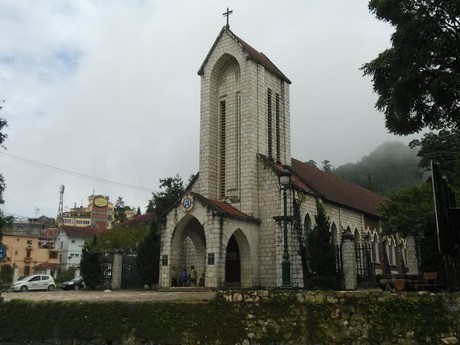 Soon we acclimated ourselves and enjoyed the beautiful atmosphere. Unlike places we have visited so far in Vietnam, here the climate was truly mountainous. Many colorfully dressed women of of local minorities walked there. From the window of our hostel we saw mountain ranges seemingly at our grasps.

Our first steps led us to the local marketplace . Also to popular terraced rice fields. Local girls stopped us seldom and competed with one another to sell us things. However, more than all sorts of bracelets we enjoyed the view of buffalos eating grass with their calfs. The view over the landscape was something amazing. 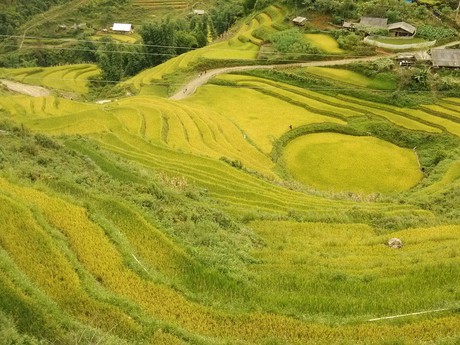 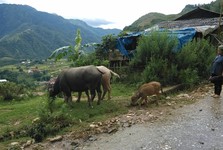 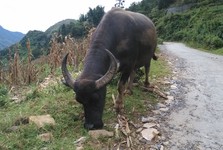 After the first day off we decided to make a long trip. We rented a bike at a stand opposite to our hostel. The price was almost negligible. And we set off into the mountains. It is in Sa Pa where the highest peak of Vietnam lays and it is called Fan Si Panem (Phan Xi Păng in Vietnamese). Its height (3143 m) is also the reason for its nickname „the roof of Indochina “. The Silver Waterfall lured us (Thác Bạc in Vietnamese). Mostly it was Trầm Tôn gorge which was curious for us as it is the highest placed gorge in Vietnam. They say one his end is almost always sunny. The other sees often rains showers. We couldn’t believe it but soon we realized it on our own. Literally.