Published: 9.10.2007
We think that the nature and countryside around Lipno-Dam are not necessary to be described in more detailed way. Frankly speaking, there are plenty of places of interest for excursions for tourists, cyclists, and skiers in winter.

A small problem is existence of Bohemian Forest National P

ark, or better – its Administration – as the movement here is possible on marked and signed roads and paths only. However, it is not clear how will be organised the border-crossing (if ski-running-traces will be accessible to the frontier only or will be allowed on „Czech routes“ only) Anyway, we find it in this winter.

The roads, suitable also for less experienced cyclists, are placed around the whole lake. In Lipno nad Vltavou (here we find easily appropriate accommodation in summer as in winter) there are many possibilities for entertainment as for sporting activities. We can go along both Vltava banks – against stream direction. In Frymburk or Dolní Vltavice, we can use the services of  ferry, taking us to the opposite bank. Attention – the ferries are out of operation  during strong winds and  at night. Anyway, in case of long excursion could be used also a ferry in Horní Planá. The last sand-bank is bridge in Nová Pec, at the beginning of Lipno-lake.

The excursion to Moldaublick with look-out-tower, just in Austria, is quite interesting. From here, there is really an excellent view to the whole Vltava-valley. The other possibility is a visit of ruin of Vítkův kámen castle, situated in an altitude of 1000m of sea level.

The other tips – these are the ways along navigation canal, known as Schwarzenberg canal. You can follow the navigation (cruising) of the meter-woods on short sections (for an illustration how it was made in past). The way along lake via Přední Výtoň to Frýdava, or up to Rakovská bay leads on the plain.

Anyway, you can choose other ways, these are shorter, but to Vítkův kámen are more steeper. As an example, way along red marked path from Přední Výtoň via Bukový vrch (Oak Hill) and St.Thomas. The other way (roundabout way) via Spáleniště and Pasečná, but

at the end we have to mount up the hill. We can go on foot along marked paths, but on cycle it would be better to take signed cycloroute we choose. Anyway, the visit of castle-ruin and views around are the best reward for a climb to „1000 m high hill“ on right Vltava bank.

If we choose a shorter variante, we return to the lake, so to some ferry-point, and from here, along the second bank  to the pier. Provided we tread on cycle  and do our best to see and visit as much as possible, we continue along navigation canal, which is more or less clear, but the way is mostly plain. It it possible, of course, to use the paths in Austria, along canal. Anyway, we recommend you to divide  the excursion up to Nová Pec, in couple of days.

Zadní and Přední Zvonková are the places most remote from the dam-pier. So, we start our next excursion from Dolní Vltavice, and via tourist border crossing Ježová/Iglbach we reach the way along navigation canal, and again, through the other border crossing we return the Bohemian part of canal. We visit Moldaublick, situated on left part of way, the access is good signed. We reach the bridge in Nová Pec on way along the canal.

The cycling way on the road along left bank is not very attractive, cycling route is not following the main road. This bank has more hills, so the way is more tiring. The return way along right bank via Přední Zvonková, Kyselov or via Dolní Vltavice and ferry, is more acceptable. 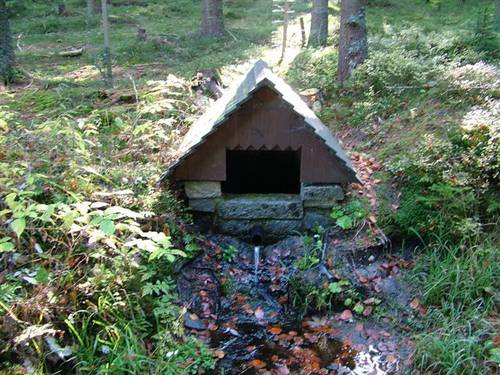