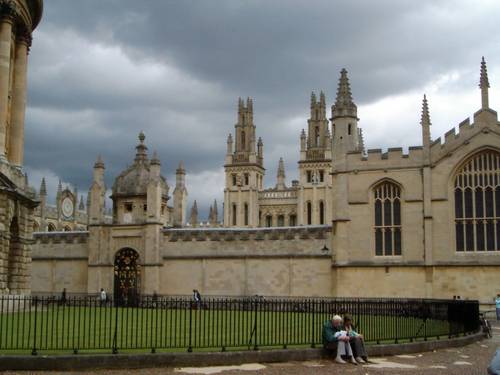 So, first steps of each visitor are headed for local Colleges. You can find here 38 buildings of such type, and their spaces call many tourists. Merton College is one of most visite

d, and it is also the oldest one. First buildings of this complex were constructed just in the middle of 13th century, concretely in 1264. This college has more interesting points, such as the oldest library of all over the world, being in operation since that date, serving continually for scientists and students.

A chapel is also open for tourists. It is a part of Merton College complex. This belongs to most beautiful church buildings in Oxford. Its

construction was started in 13th century. It is true that it was reconstructed several times within next coming hundreds of years. So, famous British architect, Christopher Wren, let it his „manuscript“.

Magdalene College is often joined with an attribute of most beautiful and most enchanting of all buildings. Anyway, it is rather younger as just mentioned Merton College, it was built in second half of 15th century. The bell tower, which forms its part, belongs to most known buildings in Oxford. It is often pictured on photos and postcards. It was constructed in 1492 and watches the towm from height of 144 metres. Just since 15th century, it presents a part of local tradition. So, each year, on 1st May, the University choir starts to sing, and celebrates – from bell tower top (in advance) - summer arrival.

Anyway, not only University Colleges could merit your attention. If you are one of tho

se, who like nature, you will be very pleased with a visit of Oxford Botanical Garden. By the way, this garden is one of oldest scientific gardens of the world. The garden was established in 1621, as an University part. Healing plants were growing here for scientific purposes and the same situation could be found even now. If you are good botanist, you can test your knowledge on spot. More than 7 thousands of planting sorts are growing here, and you can be sure that you find some rare samples among them.

The whole garden is divided, owing to its clearness, into three divisions. Nevertheless, the greenhouses belong to most attractive objects. If you decide to visit it, you would seem to be found as in different world. You can admire the plants coming from dry desert or tropical areas, as wel

So, the whole garden is full of highly interesting and marvellous plants, sercet corners and places of interest. So, the first glasshouse in Great Britain at all, was constructed just in this garden. It was done more than 300 years ago, as this fact is proved by plans of 1675.

Lovers of art will be interested in Ashmolean, University Museum. It was established in 1683, and could be proud on two interesting facts. It became not only the oldest museum in Great Britain, but also the oldest University Museum of the whole world. You find here very important collections of art and archaeology. You can admire here the works of Michelangelo, Leonardo da Vinci or Picasso. On the other hand, real jewel, you find here, there are original, untouched,  Stradivari violin.