Before the Christianity was born, Vatican-area was uninhabitated territory, which was taken for

holy or unsuitable for living. Nevertheless, Emperor Caligula started (in 40 A.D.) with building of circus, and famous obelisk was imported there from the town of Heliopolis. On Vatican Hill, the first Christians were tortured there (during government of Emperor Nero). According to the tradition, St.Peter died and was buried there (crucified with his head down - later this turned cross became Satanistic symbol). Nevertheless, in 320 A.D., a basilica was built over St.Peter´s tomb. Anyway, boom of Church arrived during Roman Emperor Konstantin the Great. He permitted the Christianity as a new religion. Later, in 6th century, Vatican Palace was built.  Since 1378, this building became stabil seat of Pope. In the middle of 8th century, on base of so called Pipin Foundation, Pope State was established, and today´s Vatican is its inhe

ritor. In 14th century, there was started grand reconstruction of Vatican, following a spirit of Italian Renaissance style. To painters and fresco artists, belong, first of all, Fra Angelico, Raffael, Botticelli and Michelangelo. This artist left his immortal work in St.Peter Church and Sixtine Chapel. To another important buildings, „signed“ by Renaissance artists, belong Belvedere, connected with Pope Palace, by means of two galleries and Apostle Library, containing half a million of books and very rare documents.

In 1929, so called concordat, (i.e. set-complex of Lateran agreements, where Vatican Town State was founded, inside actual frontiers) was concluded. Vatican has all state competences, i.e. the bank and radio, money and stamps, and own army, too. It is a seat of so called Holy See - top authority of Catholic Church - presenting an impoirtant political and spiritual power, which unites 700 millions of Catholics. 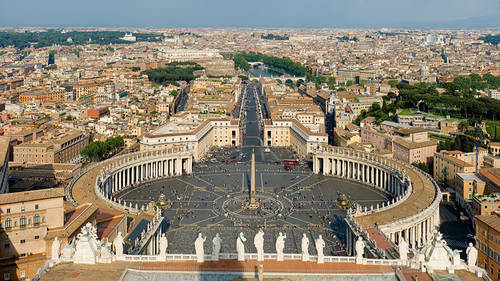