This rope-railway became, in the same way as Ještěd Mountain, a dominanta of the town of Liberec. The idea for construction of rope-railway is dated to 1924. This plan was presented by German Mountain Club for Ještěd and Jizerské Mountains. The idea tried to be realized by Ing. Roman Wienberger from a company in Leipzig. The construction alone begun in 1932. Rope-

railway line was inaugurated for public operation on 27th June 1933. Technical work was established in known Machinery Factory of František Wiesner in Chrudim. This factory constructed even the second rope railway in Czechoslovakia. The first one was constructed in Giant Mountains in 1928, and led from Jánské Lázně up to Černá Hora.

Originally, Liberec rope-railway was 1183 m long, its exceed made 400 metres. On the route, there were totally two supports with height of 10 metres and 26 metres. The rope railway made maximal speed of 5m/sec., with hour´s capacity of 330 persons. The operation was

secured without any troubles, even during German occupation time period. However, the traffic had to be stopped at the end of 1971, and vast reconstruction was started. Whole reconstruction, including preparation works, was longer that the construction itself. After essential reconstruction works, inaugurated at the beginning of 1972, and terminated in 1975, only small parts remained from original equipment (part of construction in low and upper station). Original supports were substituted with one only, in a height of 30 metres. New cabins have supporting surface of 35 persons. Slantindicular route length has now 1188 metres, with exceed of 401,7 metres. Working operation is managed in automatc as well as handful regime, having the capacity of 525 persons in an hour. But henceforth, this hung rope railway to Ještěd is very popular from the part of home visitors  as well as from abroad. Holiday relax transport is used by 250 thousandsa of visitors in a year. Rope railway is now in good technical stage and belongs to dominantas and most interested places in Liberec. 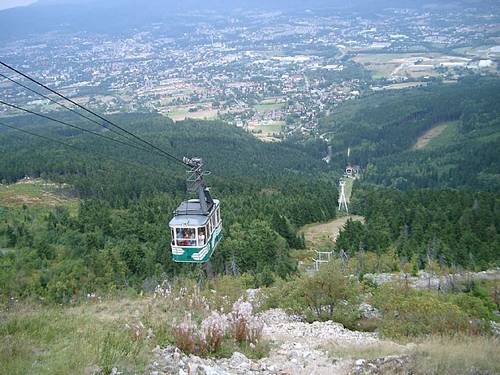