Czechoslovak dendrological society started its activity in 1922, and so continued in previous activity from Vienna. Count Ernest Silva Tarouca founded Union Garden on his grounds, with purpose of investigation and new collections. All estates, including castle and park, the Count sold to a state in 1927. Later, after 1930, this Union Garden was transferred to north edge of Průhonice, among Botič brook and Black pond. So, this new Union Garden became a ground at establishment of dendrological garden. This dendrological society terminated its activity in 1954, and Union garden was in administration of Investigative Institute of decorative gardening in Průhonice. Dendrological garden is open for public since 1990. In 1992, there was registered as Important Countryside Element.

The garden fulfills its original purpose. The collection of woods, trees and plants is renewed and added all the time. There are established new expositions or founded further groups of perennial plants, which form unthinkable part of the garden. During spring months, there is great temptation regular exhibition of tulips and enormous quantity of bulbous plants. On the other hand, in summer, there are organized exhibions of dahlias and other summer blowing plants.

One of latest activities, there is environmental educational programme fro schools and for families with children. 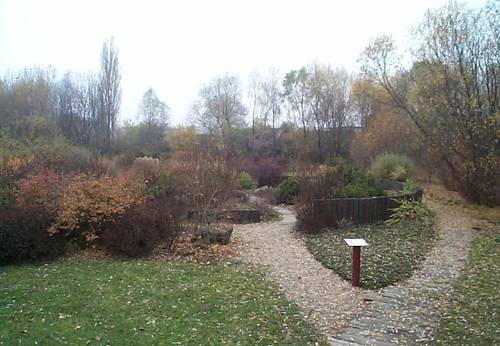