Published: 20.4.2010
Do you wish to be more closely to the nature? Do you like forest smell and sounds? So, would you visit Kersko, a loved place of writer Bohumil Hrabal.

When walking through „forest town“ you can better imagine on spot the scenes from famous film „Snowdrop Festival“ of Jiří Menzel. Anyway, the trees of local forest gave way straight, wide and long road, known as „concrete road“. The trees stepped back a couple of hardened paths and houses, of course. So, the gardeners have to look after robust coniferous trees instead of radishes or strawberry-plants. 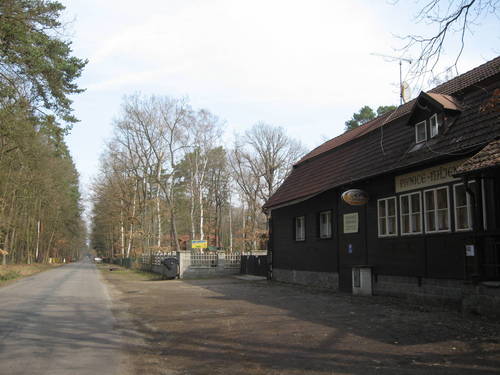 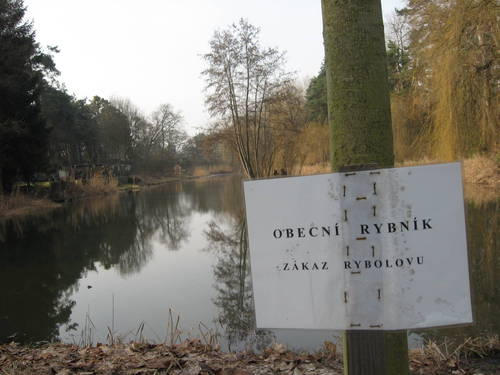 Spring sun penetrates wet forest morning, in order to dissolve last  traces of snow. Woodpecker does his work, all inhabitants of Kersko can confirm this fact. This bird dominates among their winged friends. A sound of strong woodpecker´s beak, craving for some tasty caterpillar, is drown by sound of motor saw. Anyway, all this together creates incredible atmosphere of Kersko forest. An old man with typical cap, strikingly similar to those, which had Hrabal´s figure, drives a bicycle to take the water from the well. He drives slowly and prudently. Several plastic bottles, fixed on porter, knock against each other. The driver leaves the horizon, arriving to his target. If he would drive a bit ahead, he could reach the place, known as „Hájenka“, where film - „pseudo-hunters“ guessed, how to „enjoy“ eating of hunted wild boar. A nostalgic pub, where Postřižiny Beer is being served, is, however, closed in the morning. Nevertheless, in Hájenka pub menu (the room did not lost anything from its film charm) you find local speciality - Kersko wild boar, served with hip sauce and sauerkraut. 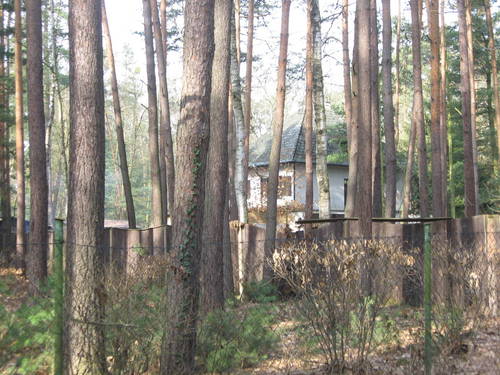 This rusty drink must be replaced by rusty water. Anyway, it is a custom for local people. From St. Joseph Spring sources the water, rich in iodium and lithium, just since 1934. This mineral water is said to be weakly radioactive. Nevertheless, it is difficult to estimate which influence could have it. Maybe, it could be sufficient to see some of Hrabal´s films.

Wooden bank, and a dog is barking behind the fence. The birds increased their songs´ intensity, and the forest woke to its standard daily life. A bus is passing „concrete road“. It is, except bicycle or car, the only connection with environs. The bus has a stop here, in order to take some local people to the town. Bus stop with a bank has its name: „A Bank“. Writer Bohumil Hrabal had his cottage only a couple of steps from here. He wrote there their famous works, such as: „Snosdrop Festival“ or „How I Attended British King!“. This, probably modern white irregular cube, is bordered with green balustrade. However, your effort to look inside the window, is useless. The curtain draws the past. On the other hand, you have the chance to admire Hrabal´s personal belongings in Nymburk Museum or to see it during season exhibition in Kersko Kuba Atelier. 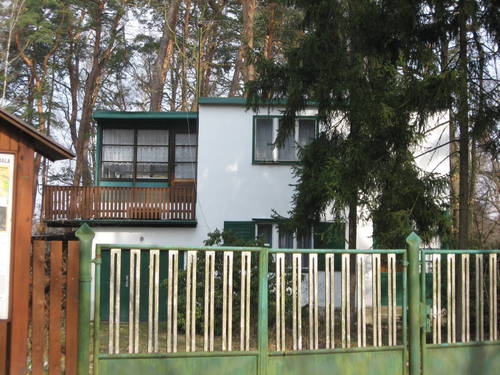 A Bit of History

Kersko, in past known as stronghold Kří, was, since 1376, in ownership of Elisabeth of Lichtenburg, grandmother of King George of Poděbrady. However, the stronghold was destroyed by Zikmund military troops. Later, a pond was buildt on this place. This pond became the greatest from all Poděbrady dominium. The pond was substituted by a forest later, and was bought by Joseph Hyross, landowner from the neighbour community of Sadská.

He parcelled the forest to separate alleys, and numbered it, according to pattern from Manhattan in New York. So, „concrete road“ has number five, the same, as New York Avenue.