Those who want to know the authentic face of the city, must - after a walk in the streets of the historical center - go out behing its walls.

You will discover an interesting blend of modern capitalist and communist architecture. The most controversial building in Bratislava is the New Bridge (Nový most, formerly Most SNP), to which at the turn of the 1960’s and 1970‘s fell victim a large part of the historical center and an architecturally significant synagogue. Due to the unique design and ethereal architecture (UFO restaurant and the view teracce in the height of 95 m above level of the river) was the bridge pronounced for the construction of the 20th century. 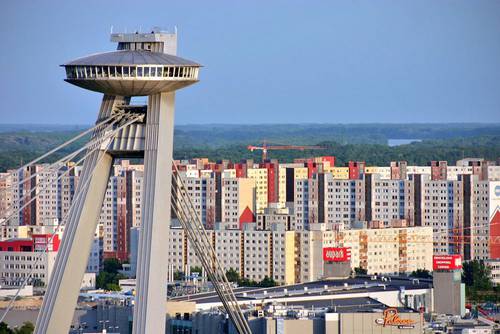 An indispensable part of the panorama of Bratislava is a monumental memorial to Soviet soldiers as victims of the town's liberation in World War II, Slavín. In 6 common and 278 individual graves are buried here 6845 Red Army soldiers. With its unique position with a view of Bratislava Slavín is a popular place for tourists, but also romantic couples.

The most socialistic square in Bratislava is the Freedom Square (Námestie slobody, formerly Gottwaldovo námestie). In the middle of the square there is the largest fountain in the city with dimensions of 200 x 200 meters called Družba (Friendship). The fountain is currently without water and with the surrounding architecture it is nowadays just a concrete memento of the former regime. The monumental statue of the first Czecho-Slovak Workers President Gottwald was stripped down with great passion at the time of the Velvet Revolution.

One of the most spectacular buildings of Bratislava is the modern building of the Slovak Radio. Its shape of an inverted pyramid captivated architects from the West aldready at the time of its inception (1983), but the myths are still alive today. Trnava toll square (Trnavské mýto) offers right two architectural gems. The construction of the former House of Trade Unions (today Istropolis) lasted 25 years and its grandeur is afforced by the right-Cuban marble – a gift from Fidel Castro. The next building – „New marketplace“ is built in the style of high-tech ideas of 1980’s, the progressive all-glass peripheral skeleton reflects the bustling life inside.

Petržalka is the largest solid housing estate in Central Europe. The change of the originally rural community was absolute. In 1967 the most significant urban Slovak century competition has been announced. Among the dozens of ambitious, utopian proposals from the entire world, was finally, inconsistently implemented the proposal of the Slovak architects. Petržalka is now the place where mixing of the socialist construction with the most modern architecture is the most apparent. Capital inflows in particular after the year 2000 changes Bratislava into islands of shiny shop-windows in the sea of monofunctional neighborhoods.

Breathe the authentic atmosphere of the cult of Miletičova marketplace. Taste the sauerkraut directly from the barrel, get to know the Vietnamese community and their offer of socks, and take a shot of Borovička (typical Slovak schnapps) with the locals. And nip directly afterwards into glittering shopping mall space near the Danube where music plays even in the underground garage. Enjoy globalization on the banks of the Danube, the world marks are for all who can afford it. Experience the contrast, which this way characterizes one of the youngest capitals of the world, constantly changing Bratislava. The tour of „The Changing Bratislava" is offered by the incoming travel agency Authentic Slovakia. 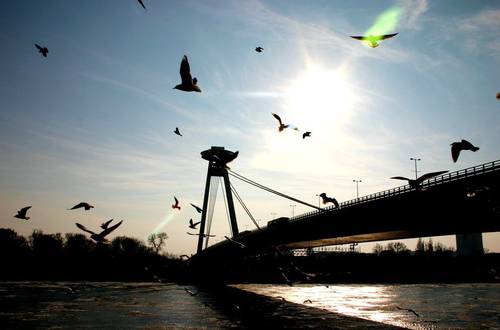