Published: 7.11.2009
Sandstone massif of Tisá Walls is placed at the edge of Labe (Elbe) Sandstone Walls in North Bohemia and reaches the altitude of 613 metres above sea level. Despite this fact, the walk is quite pleasant, you are not forced to overcome the hills or climb over the rocks, provided you omit last mounting of the section where you started your excursion.

The oldest tourist area in this countryside got its name according the adjoined Tisá village, where many yew-tres grown. In 18th century, local people were engaged with production of buttons, later with production of fancy goods and haberdashery. Nevertheless, the time trifled with the rocks. Thanks to subsequent decay, erosion, water activity  and material removal, wealthy different countryside was created, full od deep canyons with vertical walls. Nature beauty was reinforced by means of numerous pillars, towers, ravines, clefts, overhangings, caves, squares or rock „mushrooms“ and does not leave any „heart“ without notice. Rock corridors resemble town´s streets among walls of houses. High rocks of particular formations are inhabited with kestrels, ravens or redstarts. You can find here also twisted birches and low pine trees.

Two sightseeing circular tours lead along marked paths between Great and Small Walls. Just in 19th century, these places were known as wild labyrinth, where nobody would enter spontaneously, and even till 1918, nobody could enter there without guide assistance (maybe, thanks to malevolent elfs or wisps). Nevertheless, event legends could be truthful, and the people in past believed these fact more as at present. According to stories, presented by people, the dwarfs lived in local caves. They looked for rare metals and jewels in the earth, when they gathered quite big wealth. Thanks to their diligence, a subterranean town was created inside. At first, they made friends with the people, and presented them willingly their  property. However, as soon they knew that most of them would be greedy, avaricious and envious, they let their treasures deeply below the earth and behaved with people in easy way – i.e. the helped to kind ones and punished those who were evil.

Both sightseeing tours are connected with educational path marked with white square and diagonal green belt, and you can find here seven informative stops. Tourist paths are marked with two colours - green and red. Moreover, even mounteneers could find their target here. They overcome these rocks just since 1908, and the first one were Germans. Anyway, you are obliged to keep the rules, valid for preserved areas. Moreover, the entrance to rock groups among Doga and Zlomiska Tower is limited within spring and summer time period.

Some rocks have their names just since 19th century. So, at least 56 rocks have their name in Great Walls, and 19 rocks are named in Small Walls. So, you can make acquiantance, for instance, with Gothic Tower, Elephant  Foot, Bell, Knight´s Hall, Stone Boletus, Turtle, Confessional, Forest Gate, Pulpit, Hercules, Monsters´ Cave, Warts´ Stone, Chi

How to get there? By car, from the town of Děčín, in direction to Sněžník and Tisá, or from the community of Jílové and Ústí nad Labem, in direction to Libouchec – 3 kms on the road. As far as the accomodation and refreshment are concerned: it is possible to be taken in Turist Cottage.

Since 1996, Tisá Walls belong to nature monuments. The entrance fee makes CZK 30,- for adults, and CZK 15,- for  school children. For collectors of tourist visit cards and stamps, there are several types available. After payment of entry fee, you receive picture postcard and a map, for better orientation in terrain. And what could you prevent to play with children a play „looking for rocks“? In such case, you have to find completely all numbers, which are drawned on rocks, and you will be informed, according to the survey, where you are standing and if the rock really deserves well of such name. 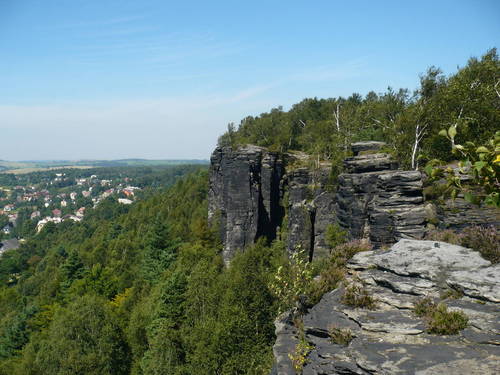