en.infoglobe.cz » Do You Know That? A Legend Called Vindobona II

In the previous part we read something about a train that since the 1950s has been connecting Germany, the Czech Republic and Austria. Its history is connected mostly to 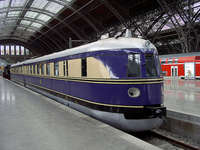 a unique phenomenon – a regular rotation of more or less unique trains by one of participating countries.

Regular transit lineBerlin/Ostbahnhof/, Dresden, Děčín, Prague, Tábor, Třeboň, České Velenice a Vienna/Franz Josef Bahnhof departed firt in June 1957. Despite the fact it was a long-distance train, it was equipped with old pre-war SVT 137. This trend of motorized trains had been holding to the end of 1980s. A remarkable machine with a timeless design, aerodynamic line and maximum speed over 200 km/h hadn’t stayed on track for long. Its definitive discharge was in the beginning of 1970s. They replacement by M 495.0 (295.0) and later M 498.0 (298.0) - happened already in 1960s (their photo you can see here. These originally Hungarian carriages

were painted in colors of ČSD during years1960-1962 and 1964-1966. During this period should have been used carriage models 5045 of Austrian ÖBB. Eventually it showed to be very complicated.

Austria as a country with the smallest  transit share on a whole route (regarding distance and number of passengers) didn’t meet many given parameters, especially in matter of speed, performance and capacity. After two less successful years the route was again overtaken by German DR, which replaced its carriages made in 1937 and used brand-new VT 18.16, known thanks to their shape as “dolphins”. Today legendary “18s” and later enormously successful “175s” established the image of Vindobona for long years. Motorized unit VT 18.16 was constructed on demand of DDR to enhance comfort and attractiveness of long-distance express transportation. Number 18 and 16 were the symbol of high performance and speed, i. e. 1800hp and 160 km/h. Except for that on Vindobona ran also " 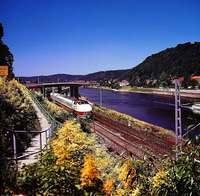 ”dolphins" on their regular routes to Scandinavia and later, in 1980s, they were dispatched as express trains Karlex and Karola, on a track between Leipzig, Berlin and Karlovy Vary.

During the years 1969 and 1972 Vindobona was ruled by ČSD, that deployed brand-new motorized units M 296.1, known rather as 852/3 "Hydra".. The train carriage factory in Studénka didn’t produce stylish products, however, its carriages were functional and reliable. We can see them even today after their partial reconstruction and motorization being used on intercity transit lines of ČD. Typical for these trains are diminutive female names such as Barborka (of Barbora), Terezka (of Tereza),Jituška (of Jitka), Evička (ofEva), Milenka (of Milena), Dorotka (of Dorota) and also names typical for the region of Krkonoše mountains such as Trautnberk, Krakonoš etc.

Last fully motorized units on the track between Berlin and Vienna was again German “dolphin” (during the years 1972-1979), today marked as VT 175. This modernized unit pickup the threads of very successful years 1966-1969. 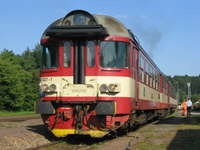 These highly popular trains finished one chapter of Vindobonas story, because during the years 1979-1980 the railway was equipped with classic trains of participating countries. Locomotives had to be changed on specific section because of traction voltage. Another important new thing was allowance of interstate transportation on until then only international route. Growth of interest in this service brought important changes in carriages ordering, it brought also increase in number of carriages etc. Next important change happened right after the year 1989. Intensive lobbying from Austrian Green party that protested against diesel locomotives in protected natural areas, cancellation of planned electrification of track between České Velenice and Veselé nad Lužnicí, and overall complicated political situation resulted in the end of transportation from Vienna to Tábor and also transfer of all international transit lines on a corridor rail line. Prague-Břeclav. For passengers it meant extra 45 kilometers and extra 45 minutes of their travel.

The situation is entirely different today and it in no way reminds of 40 year old history of Vindobona. When we look at present train timetable we can see that there are several connections between Vienna and Berlin every day. Vindobona, or rather Eurocity 172/3, is still one of them. The train departs at 6:20am from Hamburg and its final destination is Villach in Carinthia, not far from borders of Austria, Slovenia and Italy. The whole track is 1459 kilometers long and a train can drive through it in 16 hours and 23 minutes. The Berlin-Vienna track you can travel throughout in 9 and half hours...

Well, that’s all about legend called Vindobona. Hopefully, some facts interested you and some details haven’t bored you. We hope these articles inspired you to plan some nice trip to one of many cities on this trans-European route.