„It seems that the cupola is not anchored on earth but it is hanging in golden chains from sky“, so the contemporaneous chronicler described a view of new church, on occasion of its consecration in 537. From windows in side-walls, as well as from cupola, the light enters inside and illuminates all surfaces of inside space of the church. No contrasts of light and dark exist, only half-light prevails, and this fact brings solemny state of mind. The cupola of Hagia Sophia Church has a diameter of 31 metres. It does not belong to biggest constructions of Ancient times, but it seems to be the most courageous cupola of that time. Byzantion way of cupola construction went out from an effort that the eyes of believers could stare at upstairs, in order to approach near to sky and near to God. So, in Hagia Sophia Church, there were gathered all technical and artistic ways of experience from church constructions in West - and East Roman Empire. So, the connection of basilica (longitudinal buidings) and central buildings of West type. Great number of semi-cupolas and side-cupolas is rising up to main cupola. 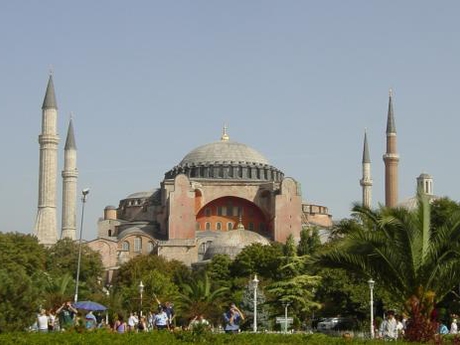 In Byzantion Empire, the inside space involved rich mosaic decoration, however, only some rests were preserved till now. The figures on mosaics are situated in front of unit golden background, turned towards an observer with frontal part, so they act too immovably. As far as the theme of these mosaics are concerned, there was a picturing of Christian legends. East-Roman Emperor Yustinian I. got an order for building of this marvellous church in 532 („the church of a beauty which was not before and would never be in the future“), after a moment, when the old church of St.Sophia, (built during rule of Emperor Constantine the Great, within 326-360, and destroyed during Nike uprising in 532). Yustinian wished that his power in East Roman Empire could be also documented with artistic works, too. So, church construction could prove a power of Roman Empire, as well as Emperor´s extraordinary position in Jesus Christ teaching.

So, Yustinian nominated Anthemis of Trall, mathematician, and builder Isidor of Milet, to effect the building of this church. The construction was financed from profits of three hundred of Emperor´s large estates and generous gifts of monarch. Thanks to this fact, the building was effected ahead quite quickly. However, in 1453, the Turks conquested Constantinople, and declared it as capital of Ottoman Empire. This fact meant for Hagia Sophia the destruction of Byzantion Empire. The church was changed into Mosque at the same time. Just within 15th and 16th centuries, four minarets were added to the building. The Ottomans made the reconstruction of this building, damaged by several earthquakes in past. Anyway, they effected little changes in church interior. Along the walls, there were hung the curtains with Prophet´s name, as well as Koran chapters were settled there. The mosaics presenting Christian themes were covered  with plaster. Nevertheless, just in 19th century, old Byzantian mosaics were discovered again. 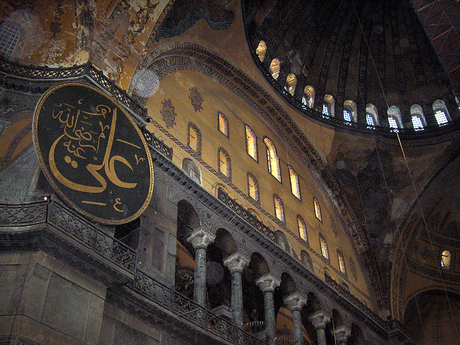 As Islam does not allow to present the pictures, all figure mosaics had to be covered again with white colour. Nevertheless, in 1930, these marvellous mosaics were uncovered with definite validity. In 1934, Kemal Ataturk, Turkish President, decided that Hagia Sophia will be definitively changed into a Museum. Building style of Hagia Sophia had persistent influence for another buildings. The art of Yustinian time period gave Middle Age art of East as well as West Europe its special form (face). Many Ottoman builders took over the Byzantion style of cupolas and developped it later into new used forms. 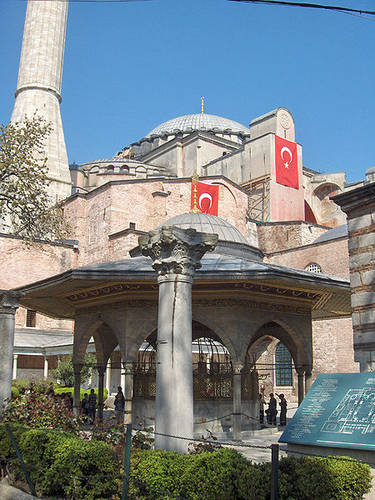