Published: 21.12.2010
Small town of Port Hardy, placed in Vancouver Island, British Colombia, is not beautiful nor interesting town at all But all lovers of nature observation would remember such locality, for sure. It is offering, not only the entrance into Cape Scott Provincial Park, but also as an experience which could not be granted in any other place.

Provided you decide to get your excursion for Vancouver Island (British Colombia) to see the whales, would you be prepared for a fact that this journey could be beautiful but you can hardly see some whales from the deck of great ship (over heads of your fellow-travellers). But Port Hardy, situated at north part of the island, where you can arrive with the car, would really be a delicacy. Nevertheless, would you try to come there alone, not within the scope of great expedition. If you would have good luck, you set sail in small boat, you could have more chance that so called whale´s dance would be fully enjoyed.

The drops promising a beauty

The worker of Cape Scott Water Taxi takes you, for small surcharge, on board of his boat and sets sail, where his pets - the seals and keporcacs - are living. He personally is visiting them several times a day, and he is unable to get tired of them. When some of such animals slides by or even breathes heavily with his nose in such way that the drops of salted sea-water land on your face, you understand fully the beauty of such situation.

But not to run before. After entry on board of the boat, you have to overcome, within 20-30 minutes, ploughing the deep, when the captain is discussing  passionately, by means of transmitter, with all persons around, in order to be informed, where the seals are located. Immediatelly, when he receives the necessary information, he takes you to such place. When you are not afraid of, he draws as near as possible to such majestic creatures. On the other hand, these animals have no fear from such ship. Anyway, such giants have so big head, why to be stressed against somebody? Such direct proximity of the whale is someting what you cannot forget at all. And even in such case, when you could not be so courageous, to dress neopren and not to submerge into ocean waves.

The secret of whale´s songs

Nevertheless, the best period for visit of this area is a time, when the seals copulate. This is a period of „singing whales“. In the course of copulation, the animals tune lovely sounds. Their songs are to be heard with human ears at relatively big distance. So, it is easy to be submerged into whales´ frolic-someness. You have to take into consideration that a big herd of animals is assisiting at such activity. It is not a reason that they would join to such entertainment but the animals know that some meal would be available there. So, they follow the copulating couple.

The wheal is rather heavy animal of 20 tonns of weight. He is ready, especially in a moment when the activity is necessary to be presented, in front of female sex, in his total beauty and mainly his physical power, to emerge from the water and shortly afterthat to sink harmoniously. So, even most serious ballet-dancer would be envious of his elegance. Would you imagine: you would be hundred times bigger, and try to dance and jump - without rebound! It could be impossible for you! You can fully understand such beauty, presented to you by such whale´s performance!

Moreover, your captain seems to be very good guide. He tells the stories  about whales as about his friends, and he is merry from their each tail´s splashing similarly as you do. And when the boat is too swinging, and you nearly loose your security, along such gigantic body, tossing about a couple of metres from you, so the steersman turns and says: „My wife prepared excellent dinner for me tonight. I have no intention to return, owing to some whale!“ 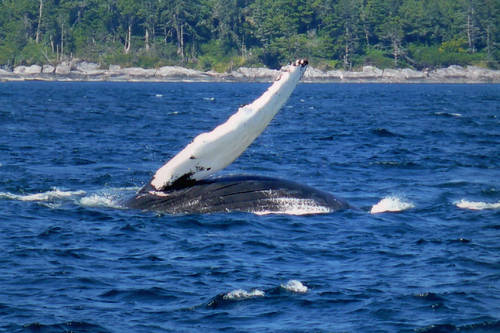 I wish to recommend you, would you let´s narrate such stories! On the other hand, the best matter would be, to experience personally such way of adventure!

Published: 20.10.2010
In our days, there was a proverb that the same number of people and bears are living in one square kilometer. Yes, you are right, it is not true at present. There are existing such places, of course, where more grizzlies could be met as their admirers. And just Khutzeymateen Reservation, not far from the town of Prince Ruppert, placed close to Alaska border, belongs to such localities.

Published: 30.8.2010
Yasper National Park is the greatest partk of Rocky Mountains in Alberta, the Province of Canada. The extent of this park makes 11000 square kilometres. You can find there many glaciers, lakes, waterfalls and mountains.

Let´s have a look at Canadian reservation, where the bears live. Video: Zuzana Dastychová