Published: 17.1.2010
Cape Town is the second greatest town of Republic of South Africa, and capital of Western Cape at the same time. It is a seat of South Africa Parliament and of another Government Institutions, Thanks to its nature sceneries, the town is marked as one of most beautiful towns of the world.

In Cape Town, there was always dominanted more liberal spirit as in the rest of the country. Within gloomy years of apartheid, many various cultures of South Africa could not be developed. As a consequence of this situation, many black and white artists had to go into exile or were expelled. Nevertheless,

since 1990, many South Africians discovered again their old roots, and  new attractive culture scene is developing in Cape Town. New galleries and clubs are open in town, where the concerts are organized. The museums as well as theatres attract daily thousands of visitors. When the first white men (the Dutch)

arrived to Cape of Good Hope in 17th century, the Khoins pastured here their flocks of sheep, and the Sans acted nomads way of life. The first colonizers from East Africa, Madagascar and countries around Bengal Bay brought slaves, who brought also their culture and religion with.

Bartolomew Diaz, the Portuguese inventor, is taken for the first white

man who saw this Cape in 1488. Nevertheless, afterthat the sailors, who overcame the shipwreck of Haarlem navy, being destroyed in Table Bay in 1647, gave very positive news about the bay, so Dutch East-Indian Merchant Society sent there an expedition, led by John van Riebeeck, in order to settle a station here. Later, on 7th April 1652, Riebeeck erected on that place Dutch flag and chose an area for small citadel and

vegetable garden. Since that time period, the navies navigating around, could be supplied with fresh vegetable, fruit, meat or wine. Later, also the other European countries realized fully the important position of Cape Town from this standpoint. In 1781, the British tried to occupy the cap, but the French got ahead of them, and so helped the Dutch to defend the place. And real building boom was awaken. Nevertheless, when Cape Town was finally in hands of British in 1795, small community was just a town with 1000 buildings, constructed mostly in French style. After changeable war disturbances, the country, situated along a cape, became British colony in 1814. In 1834, the slavery was cancelled, and shortly afterthat, many Burs (original inhabitants) left the country. So, liberal

British opinion formed a character of Cape Town, even long after 1910, when Republic of South Africa obtained an independence. When Cape Town had to follow national legislation of apartheid in 1972, more than 600 black town councillors were in their offices. Town administration still resisted against apartheid, and even formally equality of all persons was declared in 1985, but early international economic boycott and Nelson Mandela setting free from Seals´ Island jail in 1990, let to political changes and brought a freedom for all people without respect of their skin colour. Now, the prison where Nelson Mandela was in jail, serves as a museum.

In National Gallery, you can see many photos as documents of painful life in ghetto of Africans.

Nevertheless, even the works of local artists as well as the exhibitions of modern African art are impressive. Just round the corner, there is to be found Company´s Garden, vegetable garden, which forms a part of remarkable botanical garden. You can also see here South African Museum, with impressive exhibition, regarding human race history in Africa. In north direction from this garden quarter, there is placed popular shopping centre with attractive shops, souvenir shops, pubs and caffees. In the centre, there is Greenmarket, the busiest place in Cape Town, where you can

follow uninterrupted so called „Flea Market“. Around, fascinating houses are situated, built in Art Deco style, including market place decorated with detailed ornaments of animals and plants. In east direction from city centre, there is to be found a stronghold, built on ground-floor of five-pointed star. It is the oldest preserved building monument of South Africa, coming from 17th century. Newly and very well reconstructed, there is Victoria and Albert Waterfront Quarter. Busy, and even in night safe shopping centre at a port, there were open many restaurants, bars, jazz clubs and boutiques. The youngest attraction of Cape Town, there is an aquarium of two oceans, informing, in two gigantic reservoirs, about ecosysems of Indian and Atlantic Oceans. 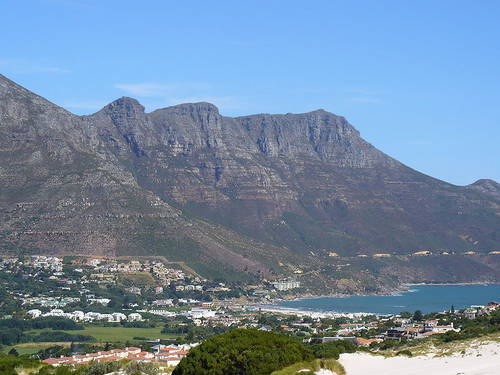 Durban-Gold Sands Of A Town, Close To The Port

Published: 20.12.2010
The biggest port of South Africa is not only a target for ships of all kind but it is a goal for its golden sands, sightseeings or casinos, as well as relax place for the people from all over the world.

Do You Know, That? - The Greatest Golden Mines Of The World

Published: 30.1.2011
The gold, a phenomenon, calling unmatched desire of his ownership, excavation or business with it even now. Each of us could have some matter made from gold, a ring, as a heritage after grandmother, tooth-bridge or some part of extra conductive connection among microprocessors in our computer.

Do You Know That? South Africa - Drakensberg

Published: 22.7.2012
Drakensberg - a fascinating world of mountains, mountain passes and scenery, which are all under a constant theme to create a fantasy world of characters from J. R. R. Tolkien empire, whose birthplace is South Africa.

South Africa – The Land of Everything

Published: 1.5.2013
South Africa is the most southern country in Africa. It is located between the Atlantic and Indian oceans. The capital is Pretoria. In this day’s article we will talk about touristic destinations of this beautiful country and we will tell you also some interesting facts.