en.infoglobe.cz » CZ, Most – Fate of One City II – Flying Church Part I

CZ, Most – Fate of One City II – Flying Church Part I

Published: 17.3.2013
Perhaps the greatest tourist attraction in the city of Most is, except for regular motorist events at local racing circuit, is a church the modern history of which is unprecedented.

Sacral and as well as a unique technic sight which the Church of the Assumption of the Virgin Mary certainly is, is the greatest attraction of Most, a city in the north Bohemia. We had a glimpse at the city in the first part of our series. None of important sacral or other historic landmarks of original Most that was in the turn of the 1970s and 1980s demolished, hasn’t survived devastating expansion of surface mining. An attempt to save the most valuable one was however, stronger and it created incentive to launch a courageous project to move the whole building hundreds of meters away, beyond the borderline of the demolition zone. 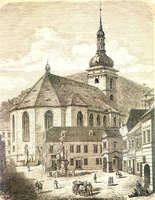 References to the original church are already from the end of the 13th century, an early-Gothic basilica of three naves built between the years 1253 - 1257 stood there but only a crypt remained.

In 1515, Most was almost destroyed by fire. The subsequent renovation gave the city shape, which lasted for several generations. Also the church was renovated, the process took almost 20 years. Main source of finances in those times were national fund-raisings and the largest contributions came from neighboring Saxony and Lužice. 12.155 threescores and 45 pennies were collected, the third was handed in to the Papal Curia of Leo X and the rest of the money made the project of Jakub Heilmann of Schweinfurt happen. He suggested constructing a large three-nave building with inside-drawn columns, closed presbytery, prismatic tower with gallery in face, entrance hall along the northern wall and northwestern sacristy. After completion of works between the years 1550 - 1560 no one suspected that the city and the church would burn partially down already in 1578. New renovation and endless renovations lasted until the end of the 19th century when the last great renovation was done as well as changes in the church interior that bolstered neo-Gothic style of the building. 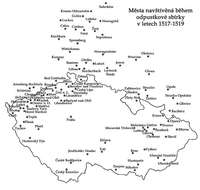 Another, de-facto decisive event, happened in the year 1964 when a plan of demolition of the whole old Most appeared. Respected architectonic landmark couldn’t be left in ruins. A government resolution on November 18 1964 proved that right. National Institution of Historic Preservation together with many engineers developed 11 variants for preservation of the church. They counted on several new locations of the church, undermining of the building and placing the building on special construction, dismantling and subsequent relocation and rebuilding on some other place. There was also a plan that wanted to left the church on it’s the then place and preservation of coal bedrock under it etc. These plans however, never allowed for the possibility of ceasing of mining that would be meaningless considering already large damage of the city.

Almost every option had its BUT. To move the church to new Most wasn’t possible due to disturbance of works on a traffic corridor. Undermining of the church and its placement on a special construction was technically impossible. By dismantle and then rebuild the church would loose its historical value and also there were not enough qualified craftsmen. If the church had been left in the center of mining field would make it look interesting however, an unstable clay bedrock and volume of left coal + difficult terrain and construction adjustments proved this option unrealizable. A demolition of the building and its 65 meters deep foundations by a rim made of reinforced concrete seemed relatively possible however, the church would be cut off from the rest of the world for the next 30 years during mining works in its vicinity…

The only possible solution was to replace the whole house of God few hundred meters to south and make it a neighbor of the Gothic church of the Holy Spirit and a baroque hospital. It had been decided to execute this plan.

CZ: Most – Fate of One City I, For Better Tomorrow

Published: 10.3.2013
When you hear Most you think of not particularly enchanting north-Bohemian panorama of factory smokestacks, refineries, and areas of brown coal mining. Yes. That is how the northern part of our republic looks. But there are also many amazing and interesting thing and I am not afraid to say there is also some beauty there despite the fact search for it would take us little more time than in other, southern parts of the republic.