It does not happen too often that the bridge could create actual town nucleus. Nevertheless, Charles Bridge, connecting west and east part of Prague, is one of such exceptions. Hradčany and Malá Strana quarters are to be found along one Vltava bank, whereas on the opposite part, Old Town quarter is situated. As a complex, a beautiful scene of hundred-towers´ Prague is arisen. The drive of vehicles across Charles Bridge is not permitted, so, foot walks belong to most romantic events of the whole metropolis. In 1357, Emperor Charles IV. put basic stone for a construction of 520 metres long and 10 metres wide bridge, built from sandstone,

supported with sixteen arches. Judith Bridge, the predecessor of Charles Bridge, was destroyed with high water. New bridge, originally known as Stone or Prague Bridge, was built according to the bridge (model) placed in Trier, Germany. The order for this construction, which became famous  all over the world, was obtained obviously by Peter Parler. This man became later a builder of St.Vitus Church in Prague Castle.

Peter Parler erected pillar over Old Town, so called Old Town Bridge Tower, taken for most beautiful gate of Gothic Europe. However, west front facade was partially destroyed with shootings after struggles with Swedes in 1648, anyway, the east front facade is decorated with rich plastics. Over the gate, you can see coat of arms of countries, which belonged, during bridge construction, to Bohemian Kingdom, further, the escutcheons of Bohemian King and Roman Emperor, including motif of kingfisher in a veil. In second floor, on relief of bridge arches, you can see St.Vitus Statue, bridge´s  patron. On right side, there is to be found a statue of Charles IV., sitting on the throne on left side, a statue of

King Wenceslas IV., also sitting on the throne. Later, the historians were surprised with credibility of statues, especially in case of Charles IV., when statue body possession corresponds real figure of the Emperor, and even his injuries is quite distinctly visible. Lower, Malá Strana Bridge Tower, situated on left bank of Malá Strana quarter, is characterictic with its Romanesque prismatic tower, which originally formed a part of outer bailey fortification. Higher Malá Strana Bridge Tower was constructed after 1464, according to impulse of King George of Poděbrady.

Although gun balls, threw by Swedes during 30-years´war, as well as the weapons from other war conflicts, destroyed many architectonical monuments, old Prague remains not only unique sample of Gothic architecture, but also a memory of Bohemian monarchs and generous patrons of art. Charles Bridge is decorated with unique set of thirty statues and groups of statues on balustrade, mostly of Baroque style, created by Matthias Bernhard Braun and Frank Maxmillian Brokoff, added with several statues in Neo-Gothic

and classical style in the course of 19th century. However, most of statue-originals were substituted with copies, as the pollution of town´s products causes lots of trouble to these works. On the other hand, a statue of St.John Nepomuk is very impressive. He became, in the course of Catholocism time period, a symbol of Catholic Church and it is worshiped as real faith defender and protector. On another bridge pillar, you can see Bruncvik statue of 1884, let to be put there by Old Town Community, as a sign of their rights to this bridge.

Charles Bridge was always in the centre of historical events, whoever ruled in Bohemia. The bridge became a witness of Bohemian Monarchs´ coronation. During Hussite revolts in 1420, John Huss adherents gathered in Malá Strana quarter. So called Frederick Falcky, Winter King,  escaped across the bridge in 1620, after lost battle at Bílá hora (White Hill), when his Protestant military troops were beaten by Catholic Habsburgs. Later, in 1648, the inhabitants of Prague defended from the bridge Old Town in front of invasion of Swedes, and last but not least, 200 years later, the Czech fought here for their independence. Now, many tourists from all over the world, walk across the bridge, listening to various musicians and admiring the artists. All these figures belong to Charles Bridge colourings. 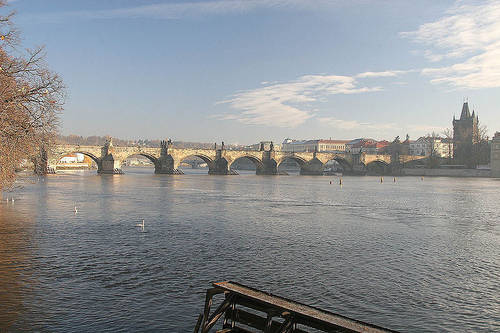