en.infoglobe.cz » Do You Know That? The Faroe Islands

Sheep Islands, as the Danish translation of the word sounded Færøerne stretch to a total of 18 islands, 11 islands and nearly 800 Rocky forelands of cold Atlantic Ocean. From the European countries are close to Scotland here - about 350 kilometres. At the half way to the west coast of Norway it is more like an archipelago, which is the Scottish Shetland.

The Faroe Islands are an interesting mixture of typical northern island nature, with a unique forests, sharp-pointed rocks and lush mountain grass plains. Romance and ubiquitous clarity and purity of the natural wealth of the local fishing villages illustrate the carefully-kept homes of local residents who do not live an easy life, but even so, in their homes, towns and villages reflected the joy of beauty, which had given them the surrounding countryside.

The first settlers on Sheep islands were Irish monks, who have come here around 700 AD. Hundred years later, the first time I visited the Vikings, who joined without hesitation to his homeland, in Norway. In 1035, then in the Danish-Norwegian union islands fell to the Kingdom of Denmark. During World War II is occupied by the British, then to the Danes again returned. Since 1948, however, the islands have an agreement on the independence, their own legislature, flag and other autonomous necessity. Today, self-governing Faroe Islands overseas territory of Denmark, led by the Danish monarch, represented by High Commissioner.

The capital is Tórshavn Islands, located on the largest and most populous island in 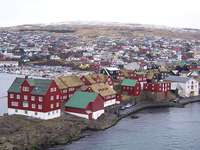 the mouth of the fjord Streymoy Nólsoyarfjørðuru. The city has about 13,000 permanent residents and its origins go back to the 10th century. City shared a similar pattern as the entire archipelago, thus changing government and relative peace. In Tórshavn Viking parliament (Aþing) had a meeting a thousand years ago. Another interesting fact is that the city is relatively young in terms of the population - nearly a quarter of local youth are between 10 to 25 years of age. Even so, the islands face long-term population decline.

The capital city is full of all the events centre. In addition, all cultural and educational

institutions here and local television broadcasts. Rich is the offer of sports and sports clubs, dominated by football and handball, every few club representatives.

The second largest and most populous island is Eysturoy, eastern island cities and Fuglafjørður Runavík. Like other northern cities, also here is major and often the only source of living for a historical fishing and everything associated with it. In the interior are doing and sheep, so that even gave the archipelago its name. The mineral resources are here to a lesser extent also mined coal.

The traditional feast Grindadráp is for every year eyesore def

enders of nature - it is about the cruel hunting of whales, during which the waters of the Gulf turns to red blood of hundreds of dying cetaceans.

The Faroe Islands lie in the Gulf of flow, which directly affects the climate into a mild but very humid. Almost 250 days a year it rains here, but the differences between summer and winter are relatively small. In summer the average temperature is around 11 °C in winter 3 °C.

More information about the Faroe Islands can be found here: