Chrustenice, a town located very close to Loděnice, a town in the valley where a river of the same name flows. Through the valley also goes the west-Bohemian D5 highway. 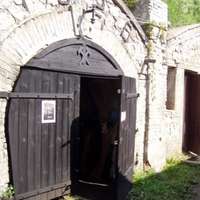 First exploration in the area of the Chrustenice shafts also known as the Iron-ore mine of Chrustenice began in the year 1861, mining began only in the following century, in 1905. Originally, there was basically only opencast mining. Density of reserves of siderite, hematite, and magnetite cause a massive growth of mines. The parts of mines opened for the public today are only fractions compared to what flooded undergrounds hide. The current miner exhibitions is located on the 8th floor that was dig during the years 1906-1907. Carts were then pulled by horses to the surface. Around the shaft there also emerged administrative infrastructure, buildings, new cableway and unique stables located underground that are still preserved. At the beginning of the 1920s unique leaning mining towers and shafts were constructed with slant up to 45 degrees. 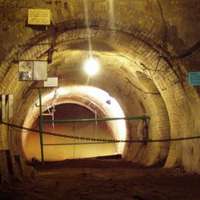 Golden age of this shaft was the period of the years 1924 - 1940, an iron ore production reached 280.000 tons per annum (in 1929). Chrustenice were the most important mining location between Prague and Plzen!

The deepest point of the mine is on the 84th floor in 426 meters below the ground, i.e. 120 meters below the sea level! The whole complex was 15 kilometers long where more than 8 million tons of iron ore had been mined in more than a century (1861-1965). There were also thirty smelting furnaces where the iron ore was partially processed before it was transported by a cableway to a railway station near Loděnice. By the way, you know this railway station very good from the movie Closely Watched Trains...

In 1953, a stagnation started and 12 years later the whole mining operation was ceased. Most of mining machines and tools ended up in a scrape yard. Some thing, though, were preserved and from then a modern history of this, indeed, unique place began. 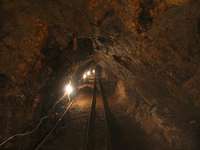 The reason standing behind foundation of this museum was in a way despair as fans of mining, former employees, speleologists have no place where to put various gathered miner artifacts, tools and technical sights such as mining carts, drills, Dnešní muzeum resp. skanzen vznikl tak trochu z nouze, jelikož důlní nadšenci, bývalí zaměstnanci a jeskyňáři neměli už kam ukládat všemožné sesbírané hornické artefakty, nástroje a technické památky od důlních vozíků po vrtačky, jackhammers, lamps and other daily need items. In 1992, after a excursion to a sealed mine and idea emerged to revitalize old memories of this place. Rebirth happened in 1995 when it was agreed upon using mines for an exhibition. At the end of June of the same year, i.e. thirty years after closure, there was a small ceremonial opening which attended also former miners. A mining cart was symbolically pulled and the Chrustenická shaft was reopened.

Today, the majority of the exhibition is on the eighth floor as the rest of the mine, 76 floors, are flooded for good (one of the results of a highway construction).

Except aforementioned remains, machines and tools visitors can ride in the genuine miner train and see some historic photos of mining industry of the Barrandien region, i.e. the America and Mořina mines.

Opening hours and ticket prices you can find HERE.