en.infoglobe.cz » Pula - The Town Full Of History And Roman Culture

Except Croatians, the Italians are living in Pula. They form, with their merry character, joyful millieu, sensible on each step. Even in past, the town was under hegemony of Venice rulers.

After the 1st World War, just the Italians occupied the town. Irrespective of such fact, the town is characteristic with its tourist activity, and also its important position could be stressed in culture area.

The monuments, destined not only for making photos

The amphitheatre, known also as Arena, is most attractive and most visited point of the town. The building is typical with two floors and arcades, and the third floor with windows. In past, the place was used not only for gladiators´ fights but also for commercial purposes. At present, the space is used as a place for theatre performances, film festivals and various concerts. On the other hand, the use of subterranean corridors could be also interesting. Here, you can find the exhibition of various objects from Roman Era, but, except of this, you can also see there a survey of grapes´ and olives´growing in Antique time period. 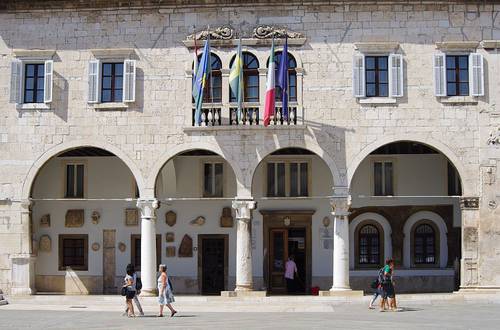 August Church belongs to the other historical monument of the town. It is constructed on elevated place, and is typical with its six columns. He served as Christian Church in the course of past periods, it was a space for theatre performances, and later, the building was used as a granary. At present, you can see there an exhibition of Antique sculptures. Close to the church, an Old Town Hall is situated. In past, it was a building constructed in Gothic style. It was reconstructed after big fire, and at present, you can admire the church built in Renaissance style. 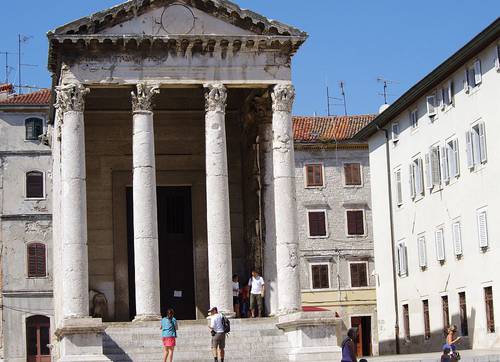 Nevertheless, even Monastery of Franciscan Friars, including St. Francis of Assisi Church, is the other sightseeing place. It is interesting, first of all, with its connection of Romanesque and Gothic elements, which create valuable work of past. The Virgin Mary Assumption Cathedral is also rich on many interesting works, such as mosaic below main altar, south portal of Renaissance style or sacristy of 13th century.

Another interesting fact: famous Irish writer, James Joyce, spent a part of his life in Pula, acting there as a teacher of English langauge. 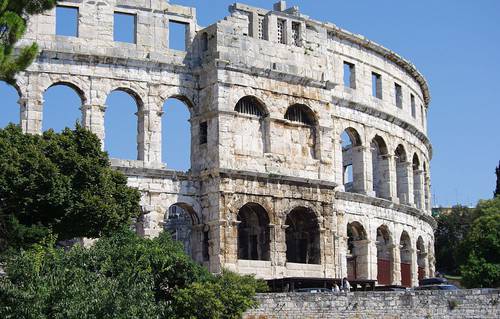